Amnesty International is one of several organisations which have sadly deviated from their original important purpose by allowing politics to dominate their agenda in the Middle East. AI’s anti-Israel reports – now legend for their bias and faulty methodology – are frequently promoted and quoted by the BBC. During this summer’s conflict in Israel and the Gaza Strip, BBC news reports repeatedly used statements from AI to advance the notion of Israeli wrongdoing.

Amnesty International’s latest report was published on November 5th and as usual is based on subjective ‘eye witness’ accounts. Predictably the report reaches the conclusion that the incidents it examined are evidence that: “[t]he repeated, disproportionate attacks on homes indicate that Israel’s current military tactics are deeply flawed and fundamentally at odds with the principles of international humanitarian law”.

Of course any objective assessment of whether or not a specific Israeli action adhered to principles of proportionality is dependent upon the assessor being familiar with their target and perceived military benefit. There is no evidence to suggest that the writers of this AI report were privy to such information.

“Given the failure of Israeli and Palestinian authorities to independently and impartially investigate allegations of war crimes, it is imperative that the international community support the involvement of the International Criminal Court (ICC).

With Amnesty International being one of the NGOs involved in political warfare against Israel, it is hardly surprising to find it promoting such assertions. And with the BBC having made its own frequent contributions to advancing the agendas of those NGOs engaged in ‘lawfare’ during and after the recent conflict (see here, here and here), it was also not astonishing to see the man responsible for the BBC’s Middle East content promoting that flawed AI report on Twitter. 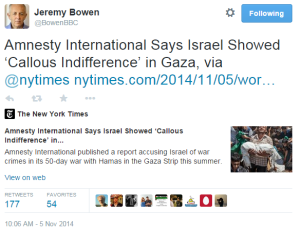 Another view of Israel’s actions in the Gaza Strip this summer provided on November 6th by a man who has somewhat more credible credentials when it comes to assessing military matters.

“The highest-ranking U.S. military officer said on Thursday that Israel went to “extraordinary lengths” to limit civilian casualties in the recent war in Gaza and that the Pentagon had sent a team to see what lessons could be learned from the operation.

Army General Martin Dempsey, the chairman of the Joint Chiefs of Staff, acknowledged recent reports criticizing civilian deaths during the 50-day Gaza war this year but told an audience in New York he thought the Israel Defense Forces “did what they could” to avoid civilian casualties. […]

“I actually do think that Israel went to extraordinary lengths to limit collateral damage and civilian casualties,” Dempsey told the group.

“In this kind of conflict, where you are held to a standard that your enemy is not held to, you’re going to be criticized for civilian casualties,” he added. […]

Dempsey said the Pentagon three months ago sent a “lessons-learned team” of senior officers and non-commissioned officers to work with the IDF to see what could be learned from the Gaza operation, “to include the measures they took to prevent civilian casualties and what they did with tunneling.”

The general said civilian casualties during the conflict were “tragic, but I think the IDF did what they could” to avoid them.”

Needless to say, Jeremy Bowen’s one hundred and eleven thousand Twitter followers have, at the time of writing, yet to be informed of General Dempsey’s assessment.