BBC News coverage of the rally in Paris on January 11th included the clip below in which Tim Willcox interrupts an interviewee talking about the recent antisemitic attacks in France to inform her – forty-eight hours after four Jewish hostages had been murdered in a terror attack on a kosher supermarket – that:

“Many critics of Israel’s policy would suggest that the Palestinians suffer hugely at Jewish hands as well.”

He then goes on to lecture her:

“But you understand; everything is seen from different perspectives.”

The EUMC Working Definition of Antisemitism includes the following:

“Holding Jews collectively responsible for actions of the state of Israel.”

Readers no doubt recall that just two months ago, Willcox made use of the age-old stereotype of ‘rich Jews’ and failed to challenge the ‘Jewish lobby’ trope in a programme he was hosting.

Update: Tim Willcox has apologised on Twitter, although it is of course obvious that the vast majority of viewers watching that programme are not among his followers. 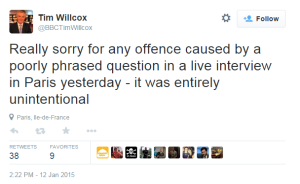 Nick Cohen’s take on this story is as insightful as ever.