An article about the FIFA presidential election which appeared in the Sport section of the BBC News website on May 4th ended with the following paragraphs:

“The Palestinian Football Association is seeking the suspension of Israel from world football.

A proposal to that effect has been included on the agenda for Fifa’s annual congress in Zurich and would need a 75% majority to succeed.

Palestine has complained that Israel has continued to hamper its football activities through restrictions on the movement of their athletes between the Gaza Strip and the Israeli-occupied West Bank.

Israel cites security concerns for restrictions it imposes but says it has eased travel for Palestinian athletes between the territories.”

On May 20th another report on that topic appeared in the website’s Sport section under the title “Fifa: Israel football faces possible suspension vote” and in addition that article was also promoted on the BBC News website’s Middle East page on May 20th and 21st. 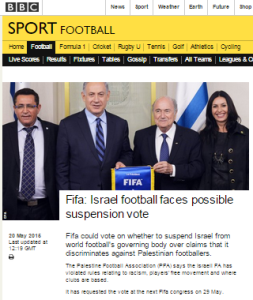 Neither of the reports provides BBC audiences with the all-important context of past and present cases of Palestinian football players with connections to terrorist organisations.

“There are numerous examples of Palestinian soccer players who have been publicly acknowledged by terrorist groups to have been members of their organizations. Jabalia Youth Sports Club player Ayman Ahmad al-Kurd was a member of the Qassam Brigades (which acknowledged his martyrdom on their website) and was wearing combat gear when he died during Operation Cast Lead. PIJ admitted—to Reuters, no less—that Wajih Mushtahi, a member of the Palestinian Olympic team who also died in Cast Lead, was a fighter in their organization. Shadi Sbakhi, who played for al-Nuseirat and once earned a spot on the national team, was not just an operative in the Qassam Brigades, but a commander.

The most egregious case, though, was that of 23-year-old Omar Abu Rwayyis (also spelled Rois or Ruis), a native of the Amari refugee camp near Ramallah, who in addition to being the goalkeeper of the Palestinian Olympic team was also an employee of the Red Crescent, the local version of the Red Cross. Abu Rwayyis was arrested in April 2012, along with 12 other Amari residents, for participating in a Hamas plot to attack IDF soldiers. Abu Rwayyis, along with other Red Crescent employees, helped transport Kalashnikovs that were used to fire on IDF vehicles.”

Likewise, at no point are readers of these two articles informed of the fact that this latest politically motivated assault on Israel’s legitimacy is led by the same man who in recent years has also tried to get Israel expelled from the International Olympic community, threatened legal action against sponsors of the Jerusalem Marathon and pressured UEFA to disallow Israel’s hosting of a tournament. Moreover, the second article amplifies the following disingenuous statement from Jibril Rajoub:

“This is nothing to do with politics, this is a sport issue.”

Readers are not told of Jibril Rajoub’s own terrorist past or of the numerous on record statements clarifying his use of sport for political ends.

“He also voiced strong opposition to any form of normalization with Israel, particularly in the field of sports.
The term “normalization” does not exist in the Palestinian sports dictionary, Rajoub stressed during a seminar in Ramallah.
He added that sports in the Palestinian territories was “one of the methods of resistance” against Israel. […]
“The youth sector in Palestine is the basic fuel for the liberation project,” Rajoub said. He also emphasized the youth’s role in maintaining a “permanent state of confrontation” with Israel.”

“The year 2014 is the year of decision; we either go to a state or to a confrontation,” Rajoub said. “The confrontation would be on three fronts: launching and escalating resistance; boycotting and isolating Israel; and halting all forms of normalization [with Israel] on the political, academic, trade and economic levels.” […]

“The option of armed resistance is also on the table,” he added. […]

“We are entitled to knock on all doors and seek all channels to recruit regional action in favor of our cause,” he said. “Our goal is to create elements of pressure on the international community.”

In addition to framing this story as sports related rather than the political issue it in fact is, the BBC fails to provide its audiences with the full range of information necessary for them to understand this transparent attempt to cynically exploit an organization supposedly committed to eliminating racism and discrimination from football for the purpose of delegitimisation.

Palestinian visitors to Tehran not newsworthy for the BBC