The Guardian, as part of their “series on the rising global phenomenon of online harassment”, commissioned research into the over 70 million comments left on its site since 2006, and concluded that articles on “Israel/Palestine” generate the highest level of abusive reader comments (The Dark Side of Guardian Comments, April 12).

The relevant graph and accompanying text is shown below. (Note that the red text “Abusive comments about Israel/Palestine” along the top black line was added by UKMW to make the graph clearer. Confirmation that our reading of the graph was correct can be found here.) 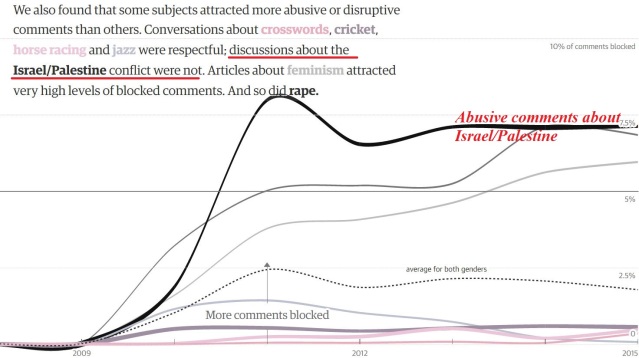 These results wouldn’t come as a surprise to readers of this blog.

Indeed, CiF Watch, the original name of UKMW, was founded largely in response to the problem of antisemitic comments below the line of Guardian articles about Israel.  A 57-page report compiled by Jonathan Hoffman submitted to the UK Parliamentary Committee Against Antisemitism documented the extent of the problem.  Additionally, both in 2007 and 2008, the CST’s annual report on antisemitic discourse called out the Guardian comment section as a purveyor of anti-Jewish discourse.

Whilst we’ve reached the conclusion that (in part due to our work) the Guardian’s moderation in response to explicitly antisemitic comments has significantly improved over the years, we didn’t need Guardian research to tell us that toxic, inflammatory, bigoted (and often completely off-topic) demonizing rhetoric about Israel is still a staple of their site.

Interestingly, back in January, the Guardian announced that articles on race, immigration and Islam – subjects that editors believed were attracting unacceptable levels of toxic commentary –  would be closed to reader comments “unless the moderators knew they had the capacity to support the conversation”.

So, in light of this new research, empirically demonstrating that articles about the Israeli-Palestinian Conflict generate the highest level of toxic commentary, will the Guardian now include Israel in the list of topics closed to reader comments when proper moderation can’t be assured? Or, will they at least acknowledge that their long-standing obsession with Israel elicits the kind of abusive and hateful comments they putatively oppose?