A report on preliminary planning permission for a housing project for senior citizens would not normally make front page news on the BBC News website. That, however, is precisely what happened on August 31st and the reason for that is the fact that the planning permission was granted by an Israeli body.

The article – titled “Israel ‘approves 464 settlement homes in West Bank’” – was published on the BBC News website’s main homepage, on its ‘World’ page and on its ‘Middle East’ page. As has often been the case in past BBC reporting on Israeli construction, the article opens with amplification of messaging from the political NGO ‘Peace Now’.

“Israel has approved the construction of 285 new homes at Jewish settlements in the occupied West Bank, according to the settlement watchdog Peace Now.

A 234-unit nursing home in Elkana, 30 houses in Beit Arye and 20 in Givat Zeev got the go-ahead on Tuesday.

Retrospective permits were also issued for 179 existing homes in Ofarim.”

Further ‘Peace Now’ messaging – together with a link to its website – appears later on in the article.

In addition, the 387 word report devotes over a quarter of its word count – one hundred and seven – to the portrayal of the reaction of an unnamed “senior US official”.

“The US said it was “deeply concerned” and warned that settlement expansion posed a “very serious and growing threat” to peace with the Palestinians. […]

A senior US official told the AFP news agency that settlement expansion – as well as continuing demolitions of Palestinian homes – “fundamentally undermines the prospects for a two-state solution and risks entrenching a one-state reality of perpetual occupation and conflict”.

“We are particularly troubled by the policy of retroactively approving illegal outposts and unauthorised settlement units,” the official said.

“These policies have effectively given the government’s green light for the pervasive advancement of settlement activity in a new and potentially unlimited way.””

A further seventy-seven words are allocated to reporting “similar criticism” from a UN official while the Israeli response is allocated 47 words.

“Jews have been in Jerusalem, Judea and Samaria for thousands of years and their presence there is not an obstacle to peace,” David Keyes said, using the biblical names for the West Bank.” [emphasis added]

Readers are not informed of the politicised origins of the term ‘West Bank’ or of the fact that until the area was occupied by Jordan in 1948, it was known – even by the British Mandatory authorities and the UN – as Judea & Samaria.

At no point are readers made aware of the fact that all the locations mentioned in this report are situated in areas which under any realistic scenario (such as those laid out in the Clinton plan or the Olmert plan) would remain under Israeli control in the event of a negotiated agreement with the Palestinians. 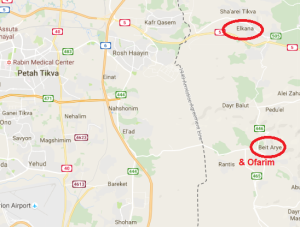 The report predictably includes the standard – yet partial – BBC mantra that is found in any report concerning the topic of construction.

“About 570,000 Israelis live in more than 100 settlements built since Israel’s 1967 occupation of the West Bank and East Jerusalem. The settlements are considered illegal under international law, though Israel disputes this.”

The article closes with an over simplified portrayal of the end to the last round of talks between Israel and the PLO.

“There have been numerous rounds of peace talks between Israel and the Palestinians since the early 1990s, with the last collapsing in acrimony in 2014.”

Once again we see that the BBC does not even pretend to produce impartial reporting on the topic of Israeli construction in Judea & Samaria and certain districts in Jerusalem. Instead, audiences are herded towards a monochrome view of the subject in an article which is less concerned with enhancing audience understanding than with contributing to the advancement of the political narrative the BBC has chosen to adopt.

The return of the BBC’s political narrative on Israeli construction

BBC’s “Obstacles to Peace”: a barrier to understanding Israel’s borders