In addition to the reporting on last week’s conference in Paris seen on the BBC News website (discussed here), the corporation of course also covered the same topic on BBC World Service radio.

An edition of the programme ‘Newshour’ broadcast on January 14th – the day before the conference took place – included an item (from 08:10 here) introduced as follows by presenter Anu Anand: 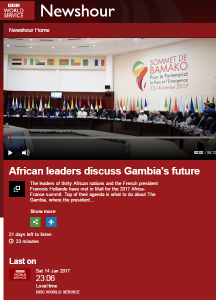 “Now, on Sunday in Paris seventy nations will meet to discuss the Israeli-Palestinian conflict, though neither of the two main stakeholders will be represented. It’s seen as a final chance to save the so-called two-state solution with Jerusalem…ah…shared as the capital between them. Our Middle East correspondent Yolande Knell has been asking Israelis and Palestinians whether they think the idea can still work.”

Knell opened with yet another typically edited presentation of the history of Jerusalem in which the 19 years of Jordanian occupation of parts of the city were erased from audience view.

Knell: “At the edge of Jerusalem’s Old City, Palestinians and Israelis pass each other on the streets. Some are out shopping, others heading to pray. So could this become a shared capital for both peoples living peacefully side by side in two nations? That’s how many see the two-state solution to the conflict. But today Israel considers East Jerusalem, which it captured in the 1967 war, part of its united capital and Palestinian analyst Nour Arafa [phonetic] doesn’t think it will give it up.”

With no challenge whatsoever from Knell, her interviewee was then allowed to misrepresent restrictions on entry to Israel from PA controlled areas, to promote the lie that the anti-terrorist fence was built for reasons other than the prevention of terrorism and to tout the falsehood of “lack of geographical continuity”.

Arafa: “The idea itself is not accepted by Israel and they have been trying to isolate East Jerusalem from the rest of the occupied Palestinian territories through closure policies, by construction of the wall which started in 2002 and by the illegal settlement expansion. So the idea itself of a future Palestinian state is realistically not possible on the ground because of the lack of geographical continuity.”

Next, Knell moved on to the town of Efrat in Gush Etzion – predictably refraining from informing her listeners that the area was the site of land purchases and settlement by Jews long before the Jordanian invasion of 1948 but making sure to insert the BBC’s standard ‘international law’ mantra.

“Here in Efrat in the West Bank, new shops and apartments are being built. Settlements like this one are seen as illegal under international law but Israel disagrees. Over 600 thousand Jewish settlers live in areas that the Palestinians want for their state.”

Having briefly interviewed the mayor of Efrat, Knell continued; promoting a particular interpretation of recent events in international fora while clearly signposting to listeners which party is supposedly blocking the “push for peace”.

“But there are new international efforts to push for peace. Last month the UN Security Council adopted a resolution calling for a halt in settlement building. Now there’s the Paris conference. Palestinians welcome these moves and Israel rejects them, saying only direct talks can bring peace.”

Knell’s next interviewee was Israeli MK Erel Margalit, although listeners were not told to which party he belongs. She then went on to raise the BBC’s current ‘hot topic’:

“But could Israel’s strongest ally, the US, be about to change the debate? I’ve come to a plot of open land and pine trees in Jerusalem. It’s long been reserved for a US embassy and now Donald Trump is talking about moving his ambassador here from Tel Aviv, where all foreign embassies are at the moment. Palestinian minister Mohammed Shtayyeh says this would kill hopes for creating a Palestinian state.”

That “plot of open land” which Knell visited is located in the Jerusalem neighbourhood of Talpiot (established in 1922) which lies on the Israeli side of the 1949 Armistice Agreement lines. Knell could therefore have posed Mohammed Shtayyeh with a question that the BBC has to date repeatedly refrained from asking: why should the Palestinians object to the relocation of the US embassy to an area of Jerusalem to which the BBC repeatedly tells its audiences the PA does not lay claim? Knell did not however enhance audience understanding of the issue by asking that question. Instead, Shtayyeh was allowed to present his rhetoric unchallenged.

After listeners heard a recording of sirens, Knell continued:

“Sirens a week ago. Just down the road from the proposed US embassy site a Palestinian man killed four Israeli soldiers in a lorry-ramming attack.”

The terrorist who committed that attack was in fact a resident of the nearby Jerusalem neighbourhood of Jabel Mukaber and the lorry he used to carry out the attack (which he owned) bore Israeli licence plates. Knell’s description of the terrorist as “a Palestinian man” is therefore misleading to audiences. She closed the item with the following words:

“Recently there’s been an upsurge in violence here and it’s added to fears on both sides in this conflict that chances for a peace deal are fading and of what could result.”

Yolande Knell’s talking points obviously did not include terrorism by Palestinian factions opposed to negotiations with Israel or a reminder to audiences of the fact that the peace process which began in the 1990s was curtailed by the PA initiated terror war known as the second Intifada.

This report joins the many previous ones in which the BBC promotes an account of the “fading” peace process that focuses on ‘settlements’ while excluding many no less relevant factors from its politicised framing.