In [Shawa’s] Disposable Bodies series (2011-13), Shawa exhibited extravagantly decorated limbless and headless shop mannequins: one covered in rhinestones and wearing an ammunition belt; another with a flurry of peacock feathers framing its bare shoulders and sticks of dynamite strapped to its hips. Shawa conceived of the project after watching news reports about female suicide bombers, victims, she believed, of both the Palestinian plight and societal and media misogyny.

In this 2013 tumblr post, you can see the art in question, along with another commentary by Shawa about what she complains is the “horrible media coverage” female suicide bombers receive.

Both the Guardian and the artist seem breezily unconcerned with human carnage produced by female Palestinian suicide bombers.

It’s extraordinary that this even needs to be stressed, but the only real “victims” of suicide bombers – female or otherwise – are those murdered and maimed by the bombers.

Further, to add some context, the most recent published data (by Pew Global) examining Palestinian views of suicide bombing revealed that 62% of Palestinian Muslims believe that “such [suicide] attacks are often or sometimes justified in order to defend Islam from its enemies”.  Support, the poll noted, “is strong both in Hamas-ruled Gaza (64%) and the Fatah-governed West Bank (60%)”. 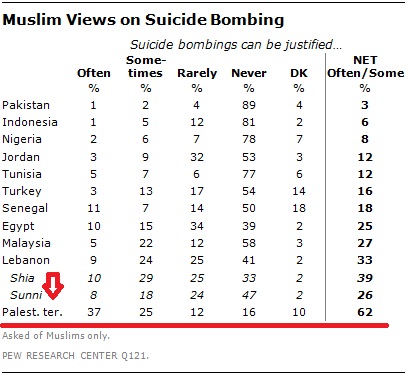 As CAMERA noted in 2020, on the 20th anniversay of the 2nd Intifda, the bloody half-decade that followed Palestinian rejection of a peace plan: “If you don’t understand Israel’s experience during the Second Intifada, a multi-year a wave of Palestinian terror attacks [including scores of suicide attacks] that began 20 years ago…you can’t understand the state of the Palestinian-Israeli conflict today”.

By normalising a Palestinian artist’s characterisation of female Palestinian bombers of “victims”, while failing to provide context on Palestinian support for such a barbarous practice, and the impact it had on Israelis, the Guardian again obfuscates Palestinian responsibility for the continuation of the conflict.