The BBC World Service ‘Newshour’ special feature that began on January 30th with Tim Franks producing a long report from Jerusalem (see ‘related articles’ below) continued on February 1st with – as promised – a report from the Gaza Strip. 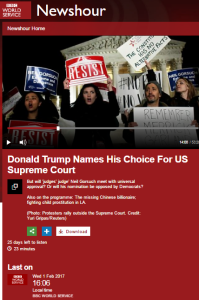 The report was divided into two parts, the first of which can be found at 14:07 here and Tim Franks introduced it as follows:

Franks: “When we talk about Israel and the Palestinians – like today; the announcement about the new buildings for settlers or the evacuation of illegal outpost – it tends to be Jerusalem or the West Bank that we concentrate on. But there’s one small strip on the map where the confrontation has congealed into something darker, something heavier. Every so often it erupts into scalding violence. It’s the Gaza Strip; home to two million Palestinians, controlled by Israel on three sides, Egypt on a fourth. The UN has said that the way things are going the enclave could be unfit for human habitation by 2020.”

Oddly, Franks’ scene-setting did not include informing his listeners that Israel disengaged from the Gaza Strip well over eleven years ago or that the “scalding violence” he described is inevitably the outcome of the continuing terror attacks against Israeli civilians, including thousands of missile attacks launched since that disengagement. Franks then proceeded to a topic which has been covered – albeit very superficially – by the BBC on several occasions in the past.

Franks: “You hear that? That’s the sound of Gaza by night: generators thumping and groaning away. The electricity at the moment, it only runs for eight hours a day: eight hours on, eight hours off. Pity the factory manager, the café owner. Hamam Aliaji [phonetic] is both: he bottles Pepsi by day, runs his coffee shop by night. Not easy.

Aliaiji: “I always say, the generator is my business partner as I put money for the generator or the electricity in general more than the money I get from here. For us to run our business, I pay a lot of money. The normal people they pay maybe 25% of their salary on power. We [have] had more than enough. The electricity, the borders, the tax – everything. It’s not possible to run a business now in Gaza; it’s very difficult.”

Aliaji: “We’ll get three hours electricity a day. That’s it.”

Franks: “A gloomy prognosis from Hamam Aliaji; a man with a ready smile, high political ambitions by the way – he says he’d quite like to be president of Palestine in about 15 or 20 years’ time. And an unusual treat for his shisha-smoking, football-watching, card-playing clientele: on these cold Gaza nights he serves everyone at his café free cups of thick, lemony lentil soup.”

Yet again we see that the BBC avoids telling its audiences that the real reason for the perpetual electricity shortage in the Gaza Strip is a long-running disagreement between the Palestinian Authority and Hamas over the payment of excise taxes for the fuel that is used in the power station in Gaza. So while listeners were encouraged to “pity” the residents of the Gaza Strip, they were not informed of the background to their plight, just as they were subsequently not informed that the reason why many buildings there have not repaired is because of Hamas’ hijacking of construction materials for the purpose of terrorism.

Franks: “Gaza’s everyday problems don’t stop though with unreliable electricity; the rest of the infrastructure is shot. A lot of recent war damage lies unreconstructed. The economy is lifeless, unemployment sky-high. So whose fault is it? People here wave their arms in many directions.”

Franks went on to present a caricature portrayal of the restrictions on the import of dual-purpose goods into Gaza while failing to adequately inform listeners of the terrorism that makes them necessary, playing the “Israel says” card and even amplifying the baseless accusation of “collective punishment”.

Franks: “The Israelis first, for the stifling border closures the Israeli government says are for security, the people here say are for collective punishment.”

He also failed to inform listeners of a factor long under-reported by the BBC: Hamas’ collaboration with ISIS terrorists in the Sinai Peninsula.

Franks: “The Egyptians who control one border and hate Hamas’ links with the Muslim Brotherhood. The Palestinian Authority in the West Bank for its rivalry with Hamas. And Hamas itself – the Islamist movement which took over the running of Gaza amid much violence back in 2007. So the frustration people feel here runs deep and a couple of weeks ago, as the power supply sputtered ever more feebly, for thousands of Gazans that frustration boiled over. Ameer Balousha [phonetic] led a protest march towards the electricity company. The security forces broke up the demonstration, Ameer was arrested.”

Balousha (voiceover): “We were continue walking towards the power company but we were surprised by the amount of force we were seen by the security forces. The amount of bullets were shot at, they were massive. We are calling for our rights. We are not calling for any chaos. We were very certain and we were very clear from the very beginning that it’s peaceful movement. Even we were shouting during the protest that it’s peaceful.”

Franks: “Is it a bit risky, you talking to the BBC?”

Balousha (voiceover): “Of course; we’re from the very beginning understand this society and we know how risky is to do something against the regime. And we’re ready from the very beginning to take this responsibility because our cause is national cause. We are calling for our humanity, for our right and this is very simple. We know that it’s risky and it will continue to be risky.”

Franks: “So what does Hamas have to say about the burdens and disillusions of so many of the two million Palestinians here in Gaza? And in particular about people now taking to the streets to protest? Ghazi Hamad is the deputy foreign minister.”

However, listeners who at this point assumed that they were going to get some information on the serially under-reported topic of Hamas’ repression of opposition to its regime in Franks’ interview with BBC regular Ghazi Hamad would have been disappointed – as we will see in part two of this post.