On November 19th the BBC News website published a report with a headline which once again illustrates the corporation’s disregard for expert advice on the spelling of the term antisemitism: “BDS Israel boycott group is anti-Semitic, says US”. 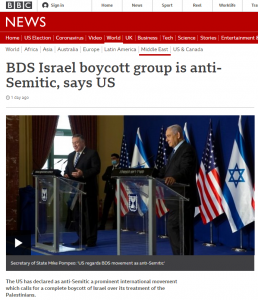 “The US has declared as anti-Semitic a prominent international movement which calls for a complete boycott of Israel over its treatment of the Palestinians.

Secretary of State Mike Pompeo said Boycott, Divestment and Sanctions (BDS) was “a cancer”, adding the US would stop funding groups linked to it.

The latest version of that report uses a video also promoted separately on the website’s ‘Middle East’ page as its main illustration. Earlier versions however used a photograph taken in Toulouse in 2018 which amplifies the ‘apartheid’ smear, together with a BBC created caption containing clear sign-posting for readers: “BDS denies its campaign to isolate Israel is fuelled by anti-Semitism” 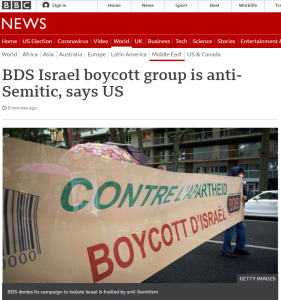 In the fourth paragraph readers find a link to a statement put out by the inadequately identified Palestinian BDS National Committee which is followed by selected quotes from some of its less extreme passages.

“BDS however rejected the charge, saying it opposed “all forms of racism, including anti-Jewish racism“.

“The BDS movement for Palestinian freedom, justice and equality, stands with all those struggling for a more dignified, just and beautiful world,” it said.

“With our many partners, we shall resist these McCarthyite attempts to intimidate and bully Palestinian, Israeli and international human rights defenders into accepting Israeli apartheid and settler-colonialism as fate.””

The BBC’s report goes on to promote (not for the first time) the inaccurate claim that the campaign was established in 2005.

“Formed in 2005, BDS has become prominent in many countries around the world. It calls for a total boycott of Israel, including cultural, economic and academic, over what it considers as Israeli repression of Palestinian rights.”

In fact that campaign’s roots are to be found in the notorious 2001 Durban conference, as documented by Dan Diker and others.

Failing to provide readers with objective and impartial information concerning the fact that what that campaign ultimately seeks to achieve is the end of Israel as the Jewish state, the BBC goes on to present that issue solely as an ‘Israel says’ matter:

“Israel has long claimed BDS opposes the country’s very existence and is motivated by anti-Semitism. It vehemently rejects any comparison with the apartheid – the state-sanctioned racial discrimination of black people during white-minority rule in South Africa – as a smear tactic.”

Readers are not given any explanation in the BBC’s own words as to why the apartheid smear tactic employed by the BDS campaign is invalid. Neither are they told that opposition to Jews having the basic human right to self-determination in their own country and the denial of Israel’s right to exist is considered – including by the UN Secretary General and a previous US president and according to the definition adopted by the UK government – to be a form of antisemitism.

The report promotes related campaigns run by the BBC in previous years. Embedded in the body of the article readers find a video of a completely one-sided interview with Michael Deas dating from July 2015 which promotes the falsehood that the BDS campaign was initiated by “Palestinian organisations”. The same much recycled video is again promoted at the bottom of the report in the ‘more on this story’ section, along with an article by Kevin Connolly which was part of the same 2015 campaign.

Also in the recommended reading, readers find an article from 2019 which was part of the BBC’s extensive campaign at the time amplifying calls to boycott the Eurovision Song Contest in Tel Aviv as well as a highly problematic report dating from November 2019 about the Human Rights Watch employee Omar Shakir.

The main image illustrating that 2019 report – along with a link – is also featured in the body of the article with the caption “Omar Shakir, a senior HRW official expelled from Israel, denied calling for a boycott”. Readers are told that:

“In 2017, Israel passed a law refusing entry to people with links to BDS, and last year expelled a senior employee of the campaign group Human Rights Watch (HRW), accusing him of supporting a boycott.

HRW condemned the latest move from the US as “undermining the common fight against the scourge of antisemitism”.

“Americans have a long history of supporting peaceful boycotts to promote social justice and human rights… The Trump administration has no business trying to tar groups because they back boycotts.””

Readers are however not informed that, as noted here a year ago:

“…analysis of Tweets sent from Shakir’s personal Twitter account between June 2018 and February 2019 by NGO Monitor shows that 16% of those Tweets focused on BDS campaigns against Booking.com and TripAdvisor and additional Tweets supported a UN “blacklist” of businesses operating in Judea & Samaria.”

The final paragraph of this latest report states:

“Last year, Germany’s parliament said the actions of the BDS, such as the placing of “don’t buy” stickers on Israeli products, were reminiscent of the “terrifying” Nazi campaign against Jewish people under Adolf Hitler.”

In fact – as only those who bothered to click on the link to the BBC’s report from May 2019 would discover – the motion passed by the German parliament also clearly stated that “the pattern of argument and methods of the BDS movement are anti-Semitic” and, like the US Secretary of State’s remarks, “vowed that parliament wouldn’t finance any projects that call for a boycott of Israel or actively support the movement”.

CAMERA UK’s archives include extensive documentation of the BBC’s partial and problematic portrayal of the Boycott, Divestment and Sanctions campaign (BDS). For years the corporation has reported related stories without adequately clarifying that campaign’s real agenda in its own words and in August 2015, we learned that the BBC considers the provision of such crucial background information “not our role“.

As in this latest report, BBC audiences have repeatedly seen the BDS campaign inaccurately described as a “movement for human rights” while no effort is made to enhance audience understanding of the fact that its aims – as clarified by one of its leaders earlier this year – clearly contradict that branding: (translation by CAMERA Arabic)

“If the refugees return to their homes, as the BDS movement demands and strives for, if we end the Israeli regime of apartheid, and the occupation of 67’, including Jerusalem, [then] what is left from the current Zionist regime? This is why the question [is asked].

If there are two states [based] on these international law foundations, and the right of return to the Palestinian refugees [is implemented], there will not be a Zionist state to talk about. There would be two states, a democratic one here and a democratic one there, a state of all its citizens here and one of all its citizens there, and the Palestinian minority would become a Palestinian majority in the state that is currently named “Israel”.

[Staying] within the BDS principles, the discourse could not [have] the Zionist state of Israel and a Palestinian state next to it, not even theoretically. This is out of the question because we will never accept the Zionist state anyhow. [Whether] there is a one-state plan, a two-state plan, a five-states plan – we will never accept any less than the right of return and the end of the apartheid regime.”

The fact that the BBC absolves itself from providing its audiences with the full range of information concerning the BDS campaign while repeatedly amplifying and mainstreaming it in frequent reports can lead to no other conclusion than that the corporation long since self-conscripted to promotion of that campaign, thereby seriously compromising its claim to editorial ‘impartiality’.

THE BDS BACKGROUND THE BBC AVOIDS GIVING ITS AUDIENCES

BBC NEWS CLAIMS BDS IS SOLELY ABOUT ‘A CULTURAL BOYCOTT’