The second segment of Tim Franks’ special report for the BBC World Service radio programme ‘Newshour’ concerning the viability of the two-state solution (see ‘related articles’ below) that was broadcast on February 3rd can be found from 45:09 here.

Franks: “Welcome back to Israel and Tel Aviv. It’s Friday so it’s the weekend and these boardwalk cafés and shops on the edge of the Mediterranean are overflowing. Tel Aviv is smart and hip and pulsing with the hi-tech start-ups that are so key to the modern Israeli economic success story. That sector, this place, can feel a world away from ‘the conflict’ even though the West Bank is only ten miles, 16 kilometers, down the road. But in between the two – almost exactly geographically in between – lives a man who says the topic is rarely out of his mind. He’s one of Israel’s greatest writers; David Grossman. He’s a life-long advocate of the two-state solution but does he now fear the ship has sailed?”

An edited clip from that interview was promoted separately on Twitter by the BBC World Service. 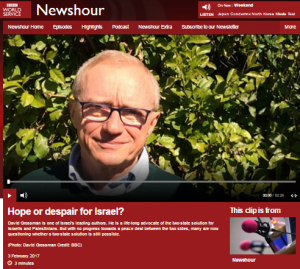 Grossman: “As an Israeli, as a Jew, the idea of something that is irreversible is not acceptable. All the reality of us today consist of so many impossibilities of 20 or 30 years ago. The collapse of the Berlin Wall, the fact that an Afro-American man was elected as president in the United States, the new elect president that seems even more impossible even when he’s already possible, seems impossible. All these were regarded as a dream and suddenly they happened and once they happened, all reality started to reorganise itself around them. It is possible because a) I do not see any better solution and b) because still there is a majority in both peoples; the more mainstream and realistic and sober people who will vote for this solution.”

Franks: “Why did you say, in that case, back in 2014 ‘the Israeli Right has not only vanquished the Left, it has vanquished Israel’?”

Grossman: “I cannot afford the luxury of despair because I live here, it is home for me. But I think that what the Right-wing did to Israel is that it dismantled the infrastructure of Israel as a state, as a civil society and brought us back to a situation where the family and the tribe are the superior dimension. What really counts is the deep, total, unconditional loyalty to the idea of the Jew. And this is dangerous because you see how such behaviour and such belief dooms us to perpetuate the conflict. I do not say that the voices of the Right-wing are totally wrong. I do not say it. I pay a lot of respect to the way they are afraid for the future of Israel in this region. I share many of their fears.”

Franks then raised a very relevant issue but misrepresented it as being in the domain of “the Right” whereas in actual fact, the second Intifada and the outcome of the disengagement from the Gaza Strip caused many Left-leaning Israelis to reconsider the ‘land for peace’ formula too.

Franks: “And yet the argument often voiced from the Right is that you’re dreaming and you’re coming up against the reality of recent historical experience. Israel withdrew from southern Lebanon in 2000 – Hizballah rushed in to fill the vacuum. Israel withdrew from Gaza in 2005 – Hamas took over. It would be insane, say the Right, for Israel to withdraw from the West Bank.”

Notably, Grossman did not answer that question but did go on to promote a generalised and completely unsourced allegation concerning Israeli ‘views’ of Palestinians which went unquestioned by Franks.

Grossman: “It is a dream to believe that we should continue to be a democracy if we keep a regime of occupation on a whole other people. Now if you are occupying another people for 50 years inevitably you start to believe that you are better; that there are two groups of human beings. One is superior and one is inferior by nature, existentially. People in Israel start to feel that the Palestinians by nature and existentially are inferior. This is a destructive way of thinking. It is destructive for us inside Israel. It’s destructive to our relationship with others. It is destructive by the way we find ourselves entrapped again in this idea of the chosen people, which I find as a pathetic, dangerous idea that in a way brought us to live our life in a kind of mythological level; not in a down to earth level. They say I’m a dreamer. They are nightmarish reality creator.”

Franks: “What about the criticism from the Left – from the international Left – that Zionism is founded on a contradiction. That yes, you want a homeland for the Jews but that inevitably involves the dispossession of another people and that is what is at the root of this conflict.”

Grossman: “So what do you suggest? To dismantle Israel and send us back to the countries we came from? No: even if there have been some injustices and ill-doings and even crimes in the first stages of the creating of Israel, now we have a reality. You know you will not repair one injustice by creating another injustice. We shall try to create a recovery but I think it will be pointless – in a way an excuse for not dealing with the complexity of the present situation – to go back 70 years ago.”

Franks: “All that you’ve said is an appeal for there still to be hope, as you describe it. Much of what you’ve written is a lament. You are a brilliant chronicler of grief and pain and loss and I wonder whether part of that is because of that sense of loss in what your country has become.”

Grossman: “First of all, I beg to differ. I have all kind of books and I think that the very act of writing, of creating a new reality, is an act of liberty and an act of hope. Being oppressed by the heaviness of the situation, by the feeling of hopelessness, [unintelligible] the ability to create, just to create characters and to deal with the nuances of life – not like what we see here when you go out to the big thick blocks of politics that have no nuances and no real understanding of the delicacy of the situation. When you write you are able really to get to the thinnest fibres of human conditions and human situation and especially when you live your life under the heaviness of grief. The power of writing is to act against the gravity of all those losses. Even in the worst human situation you can still throw something into the future like an anchor that you throw away from you – an anchor of hope – and you start to pull yourself until you can get there. Because once you are able to perform this act of hope, you say that you are not totally eliminated.”

Franks: “David Grossman, insisting he will not be denied his hope of peace and that the old order can change fast. But there are many others I’ve spoken to here who believe that change can also work destructively, that it’s ever more likely to be so and that when it does, the future – once imagined the future of a two-state solution – will stay left forever in the past.”

The declared purpose of this series of long reports by Tim Franks was – in the BBC’s own words – to examine the question “Is The Two-State Solution Dead?“. Clips from those reports were curated on a special webpage bearing that title which provides the following rationale for Franks’ visit to the region: 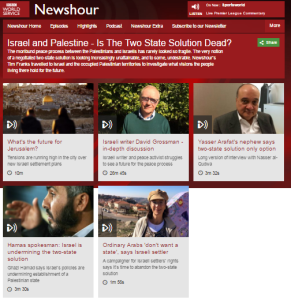 “The moribund peace process between the Palestinians and Israelis has rarely looked so fragile. The very notion of a negotiated two-state solution is looking increasingly unattainable, and to some, undesirable. Newshour’s Tim Franks travelled to Israel and the occupied Palestinian territories to investigate what visions the people living there hold for the future.”

Throughout this series of reports listeners heard from four Israelis and six Palestinians. The prime focus was placed on portrayal of ‘settlements’ as the main obstacle to the two-state solution. Despite the opportunities presented by interviews with representatives of Hamas and Fatah, Franks avoided raising a whole host of no less relevant topics including the ‘two or three-state’ question raised by the decade-long split between Hamas and Fatah.

Hamas’ refusal to countenance the two-state solution and the rehabilitation and expansion of its military capabilities were completely excluded from audience view. The Palestinian Authority’s refusal to recognise Israel as the Jewish state together with its incitement – including portrayal of the whole of Israel as ‘Palestinian land’ – and glorification of terrorism were similarly ignored. Not only did Franks fail to raise the relevant topic of the peace process-killing second Intifada but – in line with usual BBC policy – the word ‘terror’ did not once pass his lips.

If the aim of sending Tim Franks to the region was to provide BBC audiences with information which would enhance their understanding of why the peace process fails to progress and to enable them to reach informed opinions about the relevance of the two-state option, then obviously that purpose was not achieved in this series of long reports.

If, however, the purpose was to try to convince audiences – as the BBC has been doing intensively for some time and in particular since the US election – that the main barrier to peace between Israel and the Palestinians is Israeli building, then Tim Franks certainly ticked the box.