The third and final part of Tim Franks’ special report for the BBC World Service radio programme ‘Newshour’ concerning the viability of the two-state solution (see ‘related articles’ below) was broadcast on February 3rd in two segments.

Coomarasamy: “All this week my colleague Tim Franks has been travelling across Israel and the Palestinian territories for this programme. He’s been in Jerusalem, in Gaza and today – today where are you, Tim?”

Franks: “I’m in Tel Aviv, James, and more of that later in the programme. But I’m going to take you now to the West Bank, where most Palestinians live. It’s land that those who believe in a two-state solution say should form the basis of a Palestinian state. It’s also at the moment land on which several hundred thousand Israeli settlers live. Many of them go there just looking for a cheaper place to be but a minority are very committed to the idea of Israel having sovereignty all the way to the border with Jordan. Among them, the woman you are about to hear from; the founder of a campaign group called ‘Women in Green’. She’s Nadia Matar. She spoke to me on a wind-swept hilltop overlooking the West Bank. For her, that wind is blowing in her direction.”

An edited clip from the interview that followed was also promoted separately on Twitter by the BBC World Service.

In contrast to some of his previous interviews in the series, Franks displayed the ability to challenge some of Matar’s claims and views.

Matar: “There’s so many historical moments now. The new Trump administration, the fact that we are celebrating fifty years of our return to this area, the fact that the Palestinian Authority is soon going to be completely dismantled and we’re going to see all hell go out; basically the Oslo Agreements can be officially declared as dead. All this together creates an incredible window of opportunity for our government to correct the mistake that wasn’t done 50 years ago and to apply sovereignty. And I have a little secret to tell you Tim. There are so many Arabs who are with us, who want this to happen.”

Franks: “But how can you say what it is that they want?”

Matar: “Because I speak to them and I hear them.”

Franks: “But they’re represented by their politicians, their leaders – just like any other…any other country has a government that represents…”

Matar: “Excuse me. Their current leaders who they are a bunch of terrorists who have only one thing in mind: the millions of dollars that you in Europe are giving them. Not for the welfare of their people but for making weapons and strengthening themselves to fight Israel. They have only one wish: it is to destroy Israel. And we will not commit suicide. The two-state solution has been thrown into the garbage of history, thank God.”

Franks: “What do you say to those who are not making a political argument but a security argument? There are more than 200 very senior former members of the military and the security establishment who said that the violence that there is…the responsibility for that violence is of course down to the perpetrators but in large measure it is – and I quote their words – the product of Israel’s rule over the Palestinians in the West Bank and their resulting humiliation, abject poverty, despair and the absence of hope for a better future.”

Matar: “Oh wow! The sentence you just quoted; I love it. To tell us that there’s Arab terror because of despair. It is exactly the opposite. There’s Arab terror because they still have hope to be able to create a Palestinian state and to erase the State of Israel. We must once and for all wipe out the hope that they will have through terror. They will get the message that no matter what they do, they will not get one more inch from our homeland. That is when terror will stop.”

Franks: “Nadia Matar speaking to me from the settlement of Neve Daniel with her view of what makes at least some Palestinians tick. There’s a man though here in Ramallah – the administrative capital of the West Bank – whose sole job it’s been over the last 25 years to sample the mood of Palestinians. His name is Khalil Shikaki and he says he’s witnessing a decline in support for – and belief in – the two-state solution.”

Listeners were not informed that Khalil Shikaki heads the Palestinian Center for Policy and Survey Research or that some of his past analysis of “the mood of Palestinians” has proved to be decidedly off mark. In 2005 Shikaki claimed that, following Israel’s disengagement from the Gaza Strip, the priority for Palestinians there was “an improvement in the economic life” and in 2006 he predicted that Fatah would win the Palestinian Legislative Council election.

Shikaki: “The mid-90s was the golden era for the two-state solution among Palestinians and Israelis alike. Probably close to 80% supported it.”

Ignoring the obviously relevant question of why, if that were the case, the Palestinians initiated the second Intifada, Franks asked:

Franks: “And now among Palestinian opinion?”

Shikaki: “It is less than 50%. Although I would say that a lot of people no longer support it not because they dislike it but because they think it is no longer viable. That for practical reasons – most importantly the construction of settlements throughout the West Bank – has simply made it impossible to create a Palestinian state in the future.”

Failing to clarify to listeners that – despite Shikaki’s implication – since the mid-90s new communities have not been constructed, Franks went on:

Franks: “Can you look into the future and say there is a chance that if it does not happen within the next four years, say, of the Trump administration, it will be over?”

Shikaki: “It could happen in a even a shorter notice. If the Israeli government decides on a very extensive, large-scale settlement build up, then obviously this will change attitudes immediately.”

Listeners then heard a short recording followed by Franks’ introduction of his next interviewee.

Franks: “A short distance away in Ramallah, the sounds of the brand new Yasser Arafat museum – dedicated to the memory of the Palestinians’ most famous leader. The man behind the museum is Arafat’s nephew, Nasser al Qudwa and he appears in this photo, looking on at the last ever hand-shake in 1995 between Yasser Arafat and Yitzhak Rabin, the Israeli leader who was assassinated later that year. Nasser al Qudwa has for years been close to the centre of Palestinian power. He’s now talked about as perhaps the next Palestinian president. He’s a man who sticks to the line that a Palestinian state has to come into being. But isn’t belief losing out to reality?”

An edited clip from that interview was also promoted separately on Twitter by the BBC World Service. 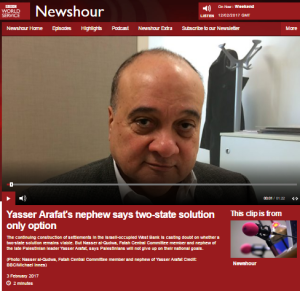 Although, as listeners later heard, al Qudwa is a senior figure in the Fatah movement which dominates the Palestinian Authority and the PLO, Franks failed to raise the very relevant topic of its refusal to recognise Israel as the Jewish state. Neither did he make any effort to clarify the statements made by al Qudwa which come across as barely veiled threats of violence.

Al Qudwa: “While there are some new legal facts on the ground, I refuse to consider these as tantamount to ending the national rights of the Palestinian people, ending the Palestinian state. I’m saying that our struggle is going to continue until we achieve our national goals. It’s not up to the Israelis and it’s not because of some settlements that this is going to come to an end. But it is going to be [a] long, arduous, bloody path.”

Franks: “I wonder if you are making the same mistakes as those on the Left in Israel which is to say look at the logic of the two-state solution; you cannot argue with the logic. But the reality is, what’s happening on the ground, you’re whistling in the wind.”

Franks: “What do you say to the Israeli government’s argument that you’re the people who are standing in the way of any process because you won’t negotiate?”

Al Qudwa: “Yeah, sure. While they take our land and they bring more settlers…”

Franks: “But that’s carrying on while you’re not negotiating so why not talk to them?”

Al Qudwa: “You know, it’s the antithesis of a peaceful solution. So while you are doing practically all these things, it just doesn’t make any sense for you to argue that I’m ready to negotiate, I’m ready to make peace. You are doing the exact opposite.”

Franks: “Yeah but from their point of view they can argue in equal force of logic which is as long as you’re not willing to negotiate, we’ve got a growing population. We need to house them somewhere so we’re going to carry on building places for them to live.”

Al Qudwa: “Whether there is negotiations, no negotiations, it’s clearly absolutely illegal under international law and it represent even a war crime. You are colonising the land of another people in the 21st century – something [that] is absolutely unbelievable.”

Making no effort to inform listeners of alternative interpretations of ‘international law’ or to clarify the disputed status of the areas concerned, Franks closed that part of the programme.

Franks: “That’s Nasser al Qudwa; one of the big power brokers inside the Palestinian Fatah faction. Later in the programme – our final voice and he’s one of Israel’s greatest writers; David Grossman.”

That segment will be discussed in part two of this post.