Earlier this month we documented the BBC’s promotion of a map produced by the political NGO B’Tselem in three separate BBC News website reports.

In addition, the same map has been added to the BBC News website backgrounder titled “Israel and the Palestinians: Can settlement issue be solved?” which first appeared in late December 2016.

The backgrounder was subsequently amended in January 2017 to include a link to the website of the political NGO ‘Peace Now’ and a map of Jerusalem produced by B’Tselem and UNOCHA which had been found in previous BBC material.

Since then, that backgrounder has been amended yet again and the B’Tselem/UNOCHA map of Jerusalem has been replaced with two versions of the new one produced by B’Tselem. In addition, the section previously titled “What difference will Donald Trump make?” has been retitled and rewritten. 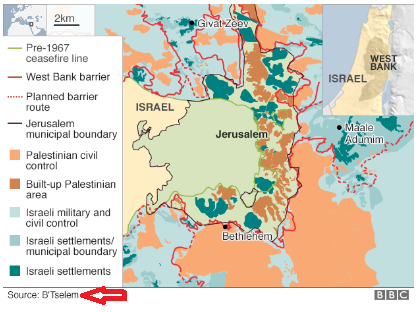 Since its latest amendment, visitors to the BBC News website have also found a link to that backgrounder promoted under the title “Can Jewish settlement issue be resolved?” [emphasis added] in numerous reports  – for example here, here, here, here, here and here.

In other words, anyone visiting the BBC News website’s Middle East page since February 1st would have been more than likely to come across those politicised maps. The map of Jerusalem portrays places such as the Old City, Neve Ya’akov and parts of Mt Scopus as ‘settlements’ despite the fact that Jews purchased land and lived in those areas long before they were ethnically cleansed by the invading Jordanian army in 1948. The same is the case in the bigger map of Judea & Samaria which portrays the whole of Gush Etzion as a ‘settlement’.

The BBC News website’s vigorous promotion of campaigning maps produced by the foreign funded political NGO B’Tselem (which engages in lawfare against Israel and is a member of a coalition of NGOs supporting BDS) makes it very difficult to believe that the corporation is committed to providing its audiences with the accurate and impartial portrayal of this issue which would meet the BBC’s obligation to provide information which will enhance their “awareness and understanding of international issues”.

Mapping the BBC’s use of partisan maps