The topic of children’s summer camps run by Palestinian terrorist organisations in the Gaza Strip is one which the BBC has largely chosen to ignore, with the exception of 52 seconds of coverage seven years ago.

The topic of terror glorifying summer camps run by the Palestinian Authority’s leading faction, Fatah, and the PLO has however received even less attention from the BBC. 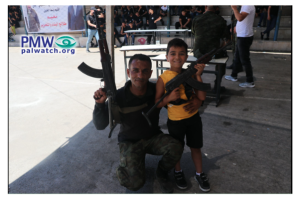 “At “the Buds of Construction and Liberation” summer camp, run by Fatah’s Central Hebron branch, hundreds of Palestinian children had individual pictures taken holding AK-47 rifles. The Fatah branch uploaded multiple photo albums of these pictures to its Facebook page.”

“A video on the official Facebook page of the Fatah Commission of Information and Culture explains that the camp is necessary because “our battle with the sons of dogs [in other words, Israelis] is long and we need a young generation”.

The page also contains a section showing children being taught to venerate Dalal Mughrabi, the Palestine Liberation Organisation (PLO) and Fatah fighter who led the worst single terrorist attack in Israel’s history, the 1978 Coast Road massacre in which 37 civilians were murdered, including 12 children.

A video shows an instructor telling a group of about 100 children inside what looks like a sports hall that Mughrabi “is equal to the entire world”, adding: “O Dalal, they trained you, and had you carry a Kalashnikov. They led you to the shore to a self-sacrificing operation. Dalal trained girls in preparing explosives and hand grenades.””

The BBC’s disinterest in such examples of indoctrination of children, glorification of terrorism and incitement clearly stands in stark contrast to its repeated promotion of the notion that the two-state solution is the “declared goal” of the Palestinian leadership.

BBC FRAMING OF THE TWO-STATE SOLUTION FOLLOWS THE USUAL TEMPLATE