The sole source for the alleged quote appears to be a book by Hirsh Goodman published in 2005, which purports to recall a radio broadcast by Ben-Gurion on June 10th, 1967, day five of the Six Day War. We could find no other evidence to back up Goodman's claim.

An article in the Independent by Harriet Agerholm gives discredited extremist Richard Falk a chance to air his side of the row involving his co-authorship of a report claiming that Israel is an apartheid state. The article, (Professor who labelled Israel an ‘apartheid regime’ defends UN report stating Israelis have used same term, March 29), quotes Falk, in an interview he gave to Middle East Eye, thusly:

Professor Falk also pointed out [in the Middle East Eye interview] that “apartheid” had been used by a number senior Israeli politicians to describe the situation with the Palestinian people, including the country’s first prime minister, David Ben-Gurion.

He quoted a 1967 radio address from Mr Ben Gurion, when he said “Israel would soon become an apartheid state” if it did not “rid itself of the territories and their Arab population as soon as possible.”

We had never come across this alleged quote before, and there weren’t many references to it online – which seems surprising given how valuable such a charge would be to anti-Zionists.  Indeed, the sole source for the quote appears to be a book by Israeli journalist Hirsh Goodman titled “Let me create a paradise, God said to himself…”, published in 2005.  On page 78, Hirsh purports to recall a radio broadcast by Ben-Gurion late on June 10th (or early on June 11), 1967, day five or six of the Six Day War.

Here’s the page (via Amazon), in which Goodman is recalling the weekend (June 9-10) he returned home for a 48 hour leave from the war. 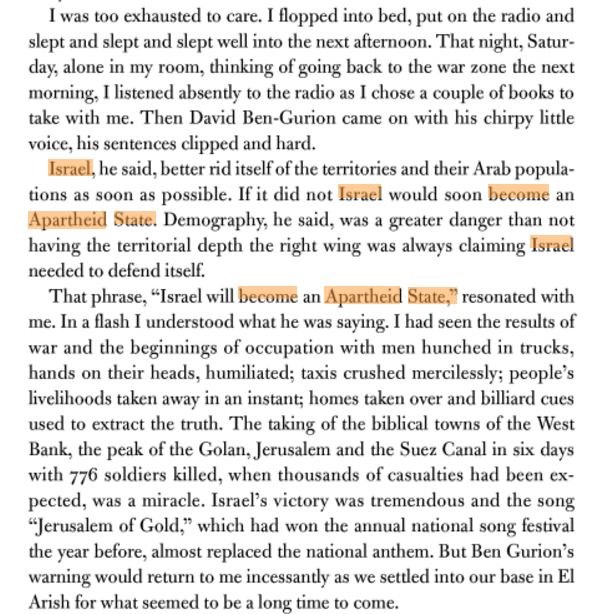 First, it appears as if Goodman is relying completely on his own memory, recalling a radio broadcast more than 35 years after the fact.  There’s no mention of it in Ben-Gurion’s Six Day War diary published by Brandeis.  CAMERA’s Israel office staff couldn’t find any mention of the quote in Hebrew searches. Moreover, it seems extraordinarily unlikely that Ben-Gurion would have said such a thing at all, yet alone while the Six Day War was still in progress –  only two days after the IDF took control of the territory.

We reached out to prominent Israeli historian Benny Morris, who told us in an email that he never heard of that Ben-Gurion quote.

We contacted Middle East historian Martin Kramer, who also said that quote seems “dubious”. Kramer noted that in the days following the war, Ben-Gurion visited Hebron and said the ancient Jewish city was Jerusalem’s twin and had to be kept and rapidly settled. Kramer added that Ben-Gurion did not want all of the West Bank, “but he wasn’t prepared to give back everything either”, thus making it extremely unlikely he would have ever opined about “the territories.” As for the “apartheid state” analogy, Kramer noted that it appears nowhere in the war diary of Ben-Gurion, or in any scholarly study devoted to Ben-Gurion’s later years.

At this point, it appears as if The Independent – by uncritically citing Falk – has helped circulate an inaccurate quote by the late Israeli prime minister.

Following this post, we reached out to the Ben-Gurion Archives. The archivist we spoke to never heard of the quote.  We also spoke to Zaki Shalom, Senior Research Fellow at The Institute for National Security Studies, and author of Ben-Gurion’s Political Struggles, 1963-1967: A Lion in Winter. Shalom also never heard of the quote. Additionally, we contacted Ben-Gurion biographer Anita Shapira, who told us in an email that the quote seemed “implausible”. Finally, we emailed Hirsh Goodman, who stands by his recollection, but declined, when asked, to provide any further details on the interview, such as the name of the radio station or the name of the interviewer.

UPDATE 2: Following our communication with Independent editors, the text of the article was revised to reflect the fact that it is only Falk’s claim that Ben-Gurion uttered these words.