How did the BBC World Service's history programmes portray the Six Day War?

The second part of an account of the Six Day War on the BBC World Service radio history programme ‘Witness‘ was broadcast on June 8th (and repeated in the World Service programme ‘The History Hour’ on June 12th). 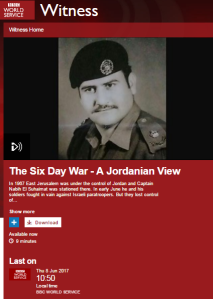 “In 1967 East Jerusalem was under the control of Jordan and Captain Nabih El Suhaimat was stationed there. In early June he and his soldiers fought in vain against Israeli paratroopers. But they lost control of the Old City and he was forced to flee Jerusalem in disguise. He has spoken to Zeinab Dabaa about the Six Day War.” [all emphasis in bold added]

That inadequate and evasive portrayal of course fails to inform listeners that the reason Jordan ‘controlled’ parts of Jerusalem on the eve of the Six Day War was because 19 years earlier it had invaded – and subsequently occupied and illegally annexed – territories designated as part of the homeland for the Jewish people at the San Remo conference in 1920.

Zeinab Dabaa’s introduction to the programme was similarly uninformative:

“Today we are going back to June 1967 and the Six Day War in the Middle East. In the second of two programmes about the conflict, I’ve been speaking to a former Jordanian army officer who tried to defend East Jerusalem which at that time Jordan controlled.”

Likewise her subsequent reference to that topic:

“Ever since the creation of the State of Israel in 1948, East Jerusalem – including the Old City which contains some of Islam and Judaism’s most holy sites – had been under the control of Jordan.”

Dabaa’s presentation of the background to the Six Day War included a vague and unexplained reference to “escalating tension”.

“It was on the 5th of June 1967 after months of escalating tension that the Six Day War began. The Israelis effectively wiped out the Egyptian air force on the first day of fighting. It was the beginning of a series of bitter defeats for Egypt, Syria and Jordan.”

A rare reference to the actions of terror groups was presented in partial terminology and without any explanation of what those groups were supposedly ‘resisting’ at a time when ‘occupation’ did not exist:

“By the mid-60s Palestinian resistance groups supported by Egypt and Syria were carrying out regular attacks on the Israeli border. This was followed by Israeli reprisals and a gradual build-up of Arab military forces around the border. Then, on the 30th of May 1967, King Hussein of Jordan and President Gamal Abdel Nasser of Egypt signed a joint defence agreement. During the signing ceremony, Nasser said ‘our basic objective will be the destruction of Israel’.”

However, completely absent from this programme’s presentation of the factors that caused the Six Day War were Soviet disinformation, Nasser’s expulsion of UN peacekeepers from Sinai, the subsequent massing of Egyptian troops in the peninsula and Egypt’s closure of the Straits of Tiran.

Moreover, not only was the Israeli prime minister’s appeal to Jordan not to join the conflict erased from the picture given to World Service listeners but the fighting in Jerusalem was inaccurately portrayed as having been initiated by Israel.

Dabaa: “On the day the war started Captain Suhaimat and his company did their best to defend the Mandelbaum Gate into all Jerusalem.”

Suhaimat: “The fighting began at 11:25 am. The Israelis attacked us with light weapons.”

Dabaa: “But on Tuesday the Israelis started to intensify their attack.”

In fact, as Jordan’s King Hussein documented himself in his 1969 book, the Jordanians had been attacking Israel for several hours before any Israeli response came.

Riad [the Egyptian general who commanded Jordanian forces] increased our fire power against the Israeli air bases by directing our heavy artillery – long-range 155’s – on the Israeli air force installations within our line of fire. Our field artillery also went into action, and our Hawker Hunters [British-supplied fighter jets] were ready to take part in the combined operation with the Iraqi and Syrians. […]

… we received a telephone call at Air Force Headquarters from U.N. General Odd Bull. It was a little after 11 A.M.

The Norwegian General informed me that the Israeli Prime Minister had addressed an appeal to Jordan. Mr. Eshkol had summarily announced that the Israeli offensive had started that morning, Monday June 5, with operations directed against the United Arab Republic, and then he added: “If you don’t intervene, you will suffer no consequences.”

By that time we were already fighting in Jerusalem and our planes had just taken off to bomb Israeli airbases. So I answered Odd Bull:

“They started the battle. Well they are receiving our reply by air.”

Three times our Hawker Hunters attacked the bases at Natanya in Israel without a loss. And our pilots reported that they destroyed four enemy planes on the ground, the only ones they had seen. […]

At 12:30 on that 5th of June came the first Israeli response to the combined bombing by the Jordanians, Iraqis and Syrians.” 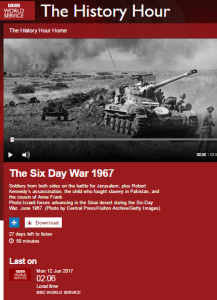 Listeners also heard of displaced Palestinians – but not of the fact that the Arabs living in the areas occupied by Jordan in 1948 and illegally annexed in 1950 had been given Jordanian citizenship.

“On the 10th of June 1967 the war ended. Hundreds of thousands of Palestinians were either displaced from their homes or found themselves living under Israeli control. Israel now controlled much more territory including the Golan Heights, the Sinai desert, the West Bank and the Old City of Jerusalem.”

Both these BBC World Service history programmes supposedly provide audiences with information intended to enhance their understanding of historic events. Clearly the many omissions of important background in both these episodes, together with the second programme’s presentation of an inaccurate account of the timeline of fighting in Jerusalem, severely hinder listener understanding of the Six Day War.