Once again the BBC gives a platform to BDS supporters without explaining that campaign's aims.

Nearly half of the June 19th edition of the BBC World Service radio programme ‘The Cultural Frontline’ was devoted to the topic of Lebanon’s boycott of the film ‘Wonder Woman’. 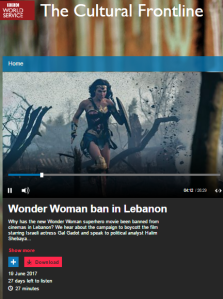 “Why has the new Wonder Woman superhero movie been banned from cinemas in Lebanon? We hear about the campaign to boycott the film starring Israeli actress Gal Gadot and speak to political analyst Halim Shebaya in Beirut and Hollywood screenwriter Kamran Pasha in LA, on their arguments for and against the boycott and the ban.”

“The new ‘Wonder Woman’ movie is a global box-office hit but why was it banned in Lebanon?”

“It is a non-violent, peaceful way to draw attention to a very important issue.”

The item itself (from 01:18 here) began with Daheley promoting the usual – but inaccurate – BBC mantra according to which the Arab-Israeli conflict has its roots in the events of June 1967. Daheley failed to provide any relevant context concerning the causes of that war.

“…this month marks 50 years since the beginning of the six-day Arab-Israeli war that changed the borders in the Middle East and laid the groundwork for many of today’s issues in the region. The legacy of this decades-old animosity reverberates to this day and affects all aspects of life in the area, including in arts and culture.”

Listeners were told that:

“… just hours before its premiere in Lebanon, the government banned the screening of the movie, citing Gal Gadot’s Israeli background. Lebanon is officially at war with Israel and has a long-standing law in place that boycotts Israeli products and exports. But the last-minute decision by the Lebanese government to ban the film took cinemas by surprise [….] and there’ve been mixed reactions to the ban from audiences in Lebanon.”

Especially in light of Daheley’s introduction to the item, the fact that Lebanon’s law mandating a boycott of Israel was passed twelve years before the Six Day War took place should of course have been clarified, as should the fact that the law applies to more than “Israeli products and exports” and even forbids contact with individuals. 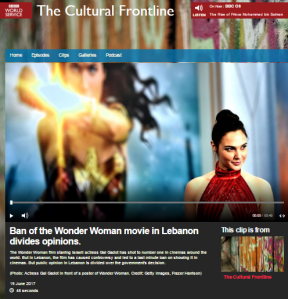 Listeners then heard four anonymous ‘man in the street’ interviews that were also promoted separately by the BBC on social media.

Daheley next introduced her first interviewee – “Halim Shebaya; a political analyst at the School of Arts and Sciences at the Lebanese American University”.

Shebaya took pains to clarify that he is “not part of the group here that’s calling for the boycott of the movie” but did not clarify what group that is or that its founders include a Hizballah sympathiser. He continued:

“I think given that some pro-Palestinian voices have been calling for a boycott of the movie because of the lead actress’ positions on some issues. Israel has conducted many wars and there have been many civilian casualties in Lebanon and Gal Gadot was reported to have even been serving in the IDF – the Israeli army – during that period. You know, all Israelis have to serve in the army but she’s voiced some explicit public support for the Israeli army’s wars in Palestine [sic] and, I would assume, in Lebanon.”

The conversation then drifted to the topic of Shebaya’s views on censorship in Lebanon in general before Daheley asked:

“Halim; do you think a cultural boycott can achieve anything?”

Shebaya: “I think it can. Today when we celebrate for example the life of various individuals who took stands in their lives in issues […] to draw attention to some injustices in the world. It is a non-violent, peaceful way to draw attention to a very important issue and whether it’s successful or not will be up for history. I think it has been successful. The boycott campaign has been successful and the end goal is always hopefully to get a peaceful resolution where Israelis and Palestinians and all Arab countries are living in peace; are living in justice. The cultural boycott will make people aware and hopefully spur them to call their governments to pressure all sides into, you know, reach just situation.”

Significantly, Daheley made no effort to challenge that inaccurate representation of the BDS campaign and failed to clarify to listeners that its aim is not ‘peace and justice’ but the eradication of Jewish self-determination in the State of Israel.

Daheley then introduced her second interviewee – ostensibly brought in to give an alternative view of the topic.

“But not everyone supports the boycott. Kamran Pasha is a Pakistani-born Muslim screenwriter, novelist and director living in Hollywood. After facing criticism on social media after writing a positive review of the film, he then posted a statement on Facebook to defend his position. He spoke to us from his home in LA to explain why he wasn’t in favour of a boycott or a ban.”

Pasha’s arguments included the fact that the film is not Israeli-made and that it has a diverse cast and a “positive message of reconciliation”. Listeners were told that:

“In Hollywood […] her [Gal Gadot’s] views are largely very restrained compared to most people that I work with. Most people in Hollywood are passionately pro-Israel.”

Pasha’s main point was not that a boycott is wrong or racist, but that it is ineffective.

“I understand the emotion behind many of the people choosing to boycott ‘Wonder Woman’ because they feel that Gal Gadot’s defence of the IDF  – I believe she posted something on Instagram saying she supported the IDF in its conflict in Gaza. At the same time I do not believe a boycott will be effective.”

Pasha went on to claim that “the best way to help the Palestinian people is for more people who are sympathetic to their position […] to come to Hollywood”, later adding that fighting “for the Palestinian cause […] is what I do here”.

He introduced the unrelated topic of South Africa into the discussion.

“Now we speak of BDS; we speak of the success of how boycotting was effective in South Africa. Many people in the BDS community use that analogy. And in my view BDS did a noble effort for many years that was not particularly effective in the 80s until Hollywood started noticing and then you started having the South African villain […] and right after that there was a seismic shift in public perception about apartheid was happening in South Africa.”

Worldwide listeners to this programme obviously did not hear two opposing opinions on the topic of this latest manifestation of anti-Israel boycotts. What they heard instead was like-minded people debating the technical merits of a boycott campaign (directed at a person solely because of her nationality and ethnicity) rather than its content.

This is of course by no means the first time that the BBC has provided an unchallenged platform for supporters of the anti-Israel, anti-peace BDS campaign without clarification of its real agenda and in the past, BBC audiences have even seen that campaign misrepresented as a ‘human rights’ organisation. Moreover, the BBC claimed in 2015 that it is “not our role” to inform audiences to what the campaigners to whom it regularly gives airtime and column space actually aspire.

And thus – as this latest example once again shows – the BBC continues its policy of mainstreaming an aggressive political campaign that both targets individuals on the basis of their religion and ethnicity and aims to deny the right of self-determination to one particular ethnic group.