The Independent reported that former Pink Floyd front man Roger Waters complained that his pro-Palestinian views have been 'silenced' in the US by what he suggests is some sort of 'media conspiracy' by top editors, producers and executives.

Roger Waters isn’t given the opportunity to discuss his anti-Israel activism in the US media or on late night talk shows because of a conspiracy to silence him, according to an interview the former Pink Floyd front man gave to RT, as reported by The Independent. 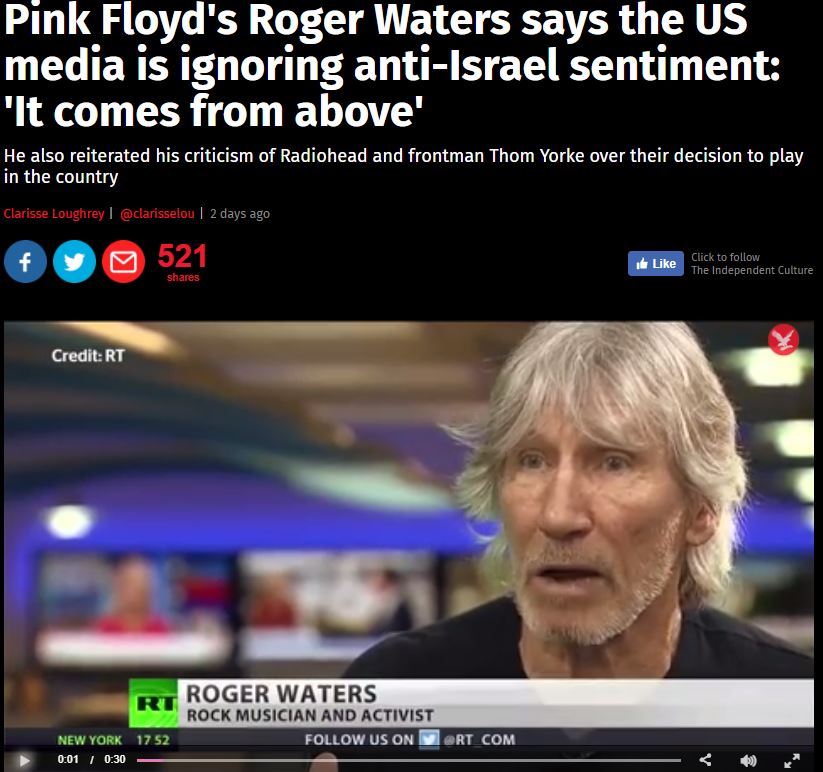 Pink Floyd’s Roger Waters has criticised the stances of both the US media, and fellow musicians, on Israel.  When asked by RT why the issue isn’t more openly discussed by the US media, he answered with what a producer for PBS reporter Charlie Rose had allegedly told him: “We’re not quite sure, but it comes from above. So, you can figure it out for yourself. It’s not rocket science.”

Now, here’s a clip of the RT interview to hear his response in context, and learn that the question specifically pertained to why Roger Waters’ anti-Israel activism “isn’t more openly discussed” in the media.

First, the complaint by Waters, who has an estimated net worth of $245 million, that he’s being effectively ‘silenced’ is absurd.

Moreover, Waters’ belief in some sort of media conspiracy (“from above”) to avoid giving him airtime needs to be seen in the context of other risible assertions, including his complaint that the “extraordinarily powerful Jewish lobby” frightens many celebrities away from joining BDS, his claim that Israel was arguably the most oppressive regime on the planet and that the state’s oppression of the Palestinians is on par with the Nazis’ treatment of Jews.

Perhaps the reason why editors, producers and executives don’t want Waters discussing BDS is quite simple:  As much as they may love the music of Pink Floyd, they’re understandably hesitant to amplify and legitimise political views which are unhinged, conspiratorial and sometimes antisemitic.  The anonymous source cited by Waters is certainly right about one thing: it sure isn’t rocket science.