As we know the BBC’s record on preventing, identifying – and correcting – antisemitic discourse in its own content is worryingly dismal. Likewise, the BBC has been unable to explain anti-Zionism to its audiences adequately and attempts to do so have been repeatedly marred by promotion of the Livingstone Formulation. Not surprisingly therefore, the BBC’s coverage of the issue of antisemitism in the ranks of the UK Labour party has also repeatedly been unsatisfactory and unhelpful to its funding public.

Against that backdrop, parts of the September 11th edition of ‘Hardtalk‘ (broadcast both on television and BBC World Service radio) with the British writer Howard Jacobson were noteworthy. 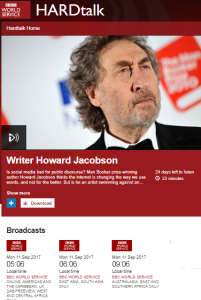 From 08:38 in the video below the topic of conversation turned to antisemitism with Jacobson concluding:

“…it would be madness to suppose it’s [antisemitism] not there and it is here in this country in a particular guise.”

Jacobson: “I don’t conflate it.”

Sackur: “But they are two distinct and different things. One is political and ideological. One is essentially about the hate of a people and a religion.”

Following Jacobson’s reply to that assertion, Sackur changed the subject, claiming that he had already “explored” the topic of Zionism in a previous interview with anti-Zionist Ilan Pappe which in fact took place over three years ago. Sackur then turned the conversation to the topic of antisemitism in the UK Labour party, claiming that “the Labour party has dealt with that”.

Howard Jacobson’s response and Sackur’s subsequent invocation of a controversial letter to the Guardian can be viewed below.