For the second time in a month, BBC News does a 'makeover' on a speech by the PA president.

An article that appeared on the BBC News website on January 14th under the headline “Jerusalem embassy: Abbas says Trump plan ‘slap of the century’” purports to inform audiences about a speech made by the Palestinian president and PLO chairman at a meeting of the PLO central council. 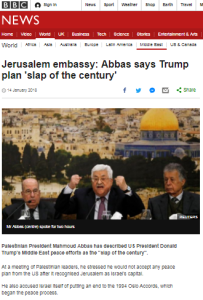 The BBC reported the content of Abbas’ speech as follows:

“Palestinian President Mahmoud Abbas has described US President Donald Trump’s Middle East peace efforts as the “slap of the century”.

At a meeting of Palestinian leaders, he stressed he would not accept any peace plan from the US after it recognised Jerusalem as Israel’s capital.

He also accused Israel itself of putting an end to the 1994 Oslo Accords, which began the peace process. […]

Speaking to Palestinian faction leaders in Ramallah on Sunday, he said: “The deal of the century is the slap of the century and we will not accept it.”

“I am saying that Oslo, there is no Oslo,” he added. “Israel ended Oslo.””

Under the sub-heading “Did he say anything new?” readers were also told that:

“On Sunday, Mr Abbas suggested Palestinians were being offered the village of Abu Dis, outside Jerusalem, as the capital of a future Palestinian state.

“What would you want, if Jerusalem were to be lost?” he asked rhetorically, according to the Jerusalem Post. “Would you want to make a state with Abu Dis as its capital?””

However, that 162 word portrayal of the speech made by Abbas – which went on for more than two hours – omits parts of its content.

“U.S. Ambassador to Israel David Friedman is a settler who is opposed to the term occupation. He is an offensive human being, and I will not agree to meet with him anywhere. They requested that I meet him and I refused, not in Jerusalem, not in Amman, not in Washington. U.S. Ambassador to the UN Nikki Haley too, she threatens to hit people who hurt Israel with the heel of her shoe, and we’ll respond in the same way.”

“Israel has imported frightening amounts of drugs in order to destroy our younger generation.”

The Palestinian president expressed the intention to continue providing payments to convicted terrorists and their families.

“Prisoners and their family members are our sons, and we will continue to give them stipends.”

He also made false claims regarding Theodor Herzl:

“Abbas then turned to the United Kingdom, saying that “we continue to demand an apology from the British for the Balfour Declaration, and we will continue to demand their recognition of a Palestinian state.” He noted that “Herzl’s phrase ‘a land without a people for a people without a land’ was made up. He arrived here and saw a people, and for that reason, spoke of the need to get rid of the Palestinians.”” [emphasis added]

“Abbas spoke for about two and half hours about how Jews were brought to Israel. He noted that England and the United States participated in the process of bringing Jews to Palestine after the Holocaust, seeking to solve the problem of having Jews without suffering the consequences.”

“Testing his audience’s attention, Mr. Abbas also gave a lengthy history lecture reaching back to the 17th century, saying that Oliver Cromwell had first proposed shipping European Jews to the Holy Land, before tracing the beginning of Zionism to what he called the 19th-century journalist and activist Theodor Herzl’s efforts to “wipe out Palestinians from Palestine.”

“This is a colonial enterprise that has nothing to do with Jewishness,” Mr. Abbas said. “The Jews were used as a tool under the concept of the promised land — call it whatever you want. Everything has been made up.”” [emphasis added]

There is of course nothing new about Abbas’ denial of Jewish history and his attempts to portray Israel as a European colonialist implant: such propaganda has been spread by the Palestinian Authority for years.

Unfortunately, there is also nothing novel about a BBC report on a speech made by the Palestinian president in which the parts of his remarks that do not fit the corporation’s chosen narrative are erased from audience view: only last month the BBC News website did the exact same when reporting on an address delivered by Abbas in Turkey.

Just as BBC audiences are never told about the ‘moderate’ Palestinian president’s personal role in the PA’s incitement to violence and glorification of terrorism or his refusal to recognise the Jewish state, they likewise do not hear anything about his longstanding denial of Jewish history and distortion of the origins of modern Israel.