The low lights of a diatribe against the world in Ramallah last night by the Palestinian “president”, who today celebrated the 12th year of a 4 year term, included his characterisation of Israel as a European "colonialist project, which has nothing to do with the Jews". Thus far, among UK media outlets, only The Telegraph covered Abbas’s speech. However, their article ignored his antisemitic smear.

In a two-hour speech by Mahmoud Abbas to the PLO’s Central Council on Sunday night in Ramallah, the aging Palestinian president gave a quintessentially Palestinian talk – blaming everyone for his people’s problems but himself. 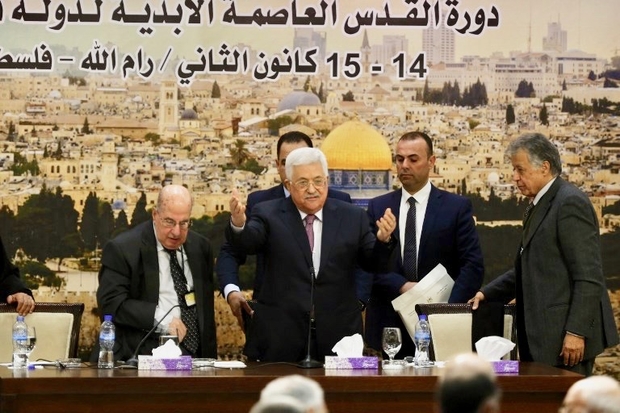 The low lights of the diatribe against the world by the “president”, who today began the 14th year of his 4 year term, included his wish that ‘God may demolish the house’ of Donald Trump. He also criticised Hamas, Islamic Jihad, his critics within his Fatah party and the Europeans, who he blamed for Palestine’s Jewish problem.  Israel, he insisted, “is a colonialist project, which has nothing to do with the Jews.” Abbas also traced the beginning of Zionism to what he called the Theodor Herzl’s efforts to “wipe out Palestinians from Palestine”.  Abbas also promoted the conspiracy theory that “Israel has imported frightening amounts of drugs in order to destroy our younger generation”.

Thus far, only the Telegraph covered Abbas’s speech. However, their 620 word article, which included every other incendiary remark by the octogenarian leader, completely ignored his ahistorical, antisemitic and conspiratorial claims.

The Telegraph’s omission is but one example within a broader media pattern of obfuscating or ignoring incendiary, pro-terror or antisemitic remarks by the ‘moderate’ Palestinian leader.

Last month we noted the UK media’s failure to report on an antisemitic accusation by Abbas, during a speech in Istanbul, that Jews are liars by nature.  And, last year we posted on the media’s silence following Abbas’s remarks to the EU Parliament evoking a medieval antisemitic libel by accusing Israeli rabbis of calling for their government to ‘poison Palestinian wells’.

Update: Shortly after this post was published, we learned that Sky News, The Independent and ITV News all reported on Abbas’s speech, while similarly omitting his comments about Jews.