Maybe the story that best captures the disconnect between the media portrayal of Israel, and the actual picture of Israel, is the fact that for a fifth year in a row, Israel was named by the UN the 11th happiest country in the world. The appraisal of Israel as a place of doom and gloom is not shared by Israelis themselves (and that includes Jews and Arabs).

In 1928, a seminal article was published by a promising Jewish academic called Salo Baron. He was a budding scholar of Jewish history, and he argued that until his time, historians of the Jewish people were focusing on specific elements of Jewish history, and presenting it exclusively as a story of doom and gloom. Baron argued against this “lachrymose” (teary) approach – there was more to Jewish history than ghettos, pogroms and antisemitism; there was flourishing community life, intellectual and religious achievements, as well as many extended periods of good relations between Jews and non-Jews. This “anti-lachrymose” view has been very influential in the study of Jewish history.

It seems that in 2018 in the field of journalism, this debate should be revived in the context of the lachrymose presentation of Israel. In publications such as the Guardian, the Economist and the Independent, a very narrow portion of Israel’s existence is presented, and one that is almost exclusively negative.

The Israel-Palestinian conflict, rising tensions with Iran, corruption allegations against the Prime Minister, treatments of minorities within Israel (Arabs, Ethiopians, Sudanese) are almost the exclusive Israel stories one reads on those pages. If one looks at the Guardian articles tagged “Israel” there are barely any stories that break out of this mold of conflict-centric and negative stories. (As a case in point, the current “other” Israel story receiving a lot of coverage in the Guardian is that of a sex-offender Australia is fighting to extradite from Israel.) Israel is portrayed as country perpetually heading off the edge of the abyss, one Knesset vote away from pariah status, one spark away from burning up in a conflagration.

What newsworthy stories are is going on in Israel, that should be reported outside of this lachrymose focus? Actually, an incredible amount. In 2017, tourism to Israel increased by fully 25%, a simply massive year on year increase; tourism to Israel brought in over £4 billion to Israel last year. Israel’s economy is continuing to grow and thrive. In 2017, GDP growth was 3%, the unemployment rate was 3.7%, and GDP per capita was $37,000, between that of South Korea and Italy. Last year, Israeli start-ups raised $5 billion, business exits were worth $23 billion. In January of this year it was reported that Arab enrollment at Israeli universities has increased 78% in the past 7 years, and Israel is involved in humanitarian efforts in Syria, Ethiopia, Mexico and more.

One could add new infrastructure projects to the list as well – but suffice to say, there are many positive news stories coming out of Israel. ­­­This is not triumphalism, but an honest assessment, that to simply tell the story of Israel in terms of conflict is well off the mark.

Maybe the story that best captures the disconnect between the media portrayal of Israel, and the actual picture of Israel, is the fact that for a fifth year in a row, Israel was named by the UN the 11th happiest country in the world. 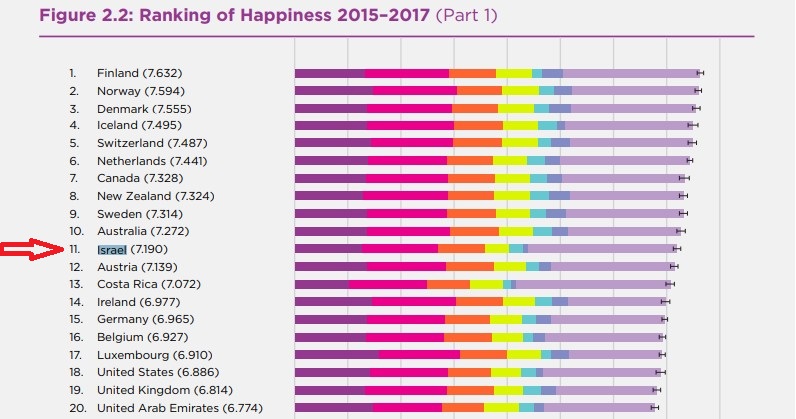 The appraisal of Israel as a place of doom and gloom is not shared by Israelis themselves (and that includes Jews and Arabs).

The dominant narrative is one that does not hold up to the scrutiny of the facts on the ground. As with every country, stories expressing both positive and negative aspects of Israel should be reported by journalists. We need new, non lachrymose coverage of Israel – because that would more closely represent the truth.

Tags from the story
Delegitimization, General UK Media, Guardian, Israel, Salo Baron, The Economist, The Guardian, The Independent
Written By
Guest/Cross Post
More from Guest/Cross Post
This a guest post by Modernity. *Satire This is going to be...
Read More