For the second time in just over a month, BBC Radio 4 audiences hear partisan accounts in an arts programme.

As can be seen in the synopsis, all but one of the stories showcased in that programme relate in one way or another to Israel. 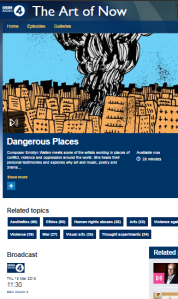 “Composer Errollyn Wallen meets some of the artists working in places of conflict, violence and oppression around the world. She hears their personal testimonies and explores why art and music, poetry and drama can sometimes flourish in times and locations of danger and violence.

What use is art in a warzone, and what can these individuals and their work tell artists in more peaceful places about making art that helps us question and communicate?

Cartoonist and free improvisational trumpeter Mazen Kerbaj talks about his work during the 2006 Lebanon war and the problem of exoticising art from warzones. Journalist and poet Bejan Matur describes how living as a Kurd in southeastern Turkey has shaped her work. Actor and educator Ahmed Tobasi explains how Jenin’s Freedom Theatre changed his life, and Mustafa Staiti discusses his work as artistic director of the city’s new Fragments Theatre. Composer Matti Kovler explores the impact of his experiences in the Israeli Defence Forces during the Second Intifada.”

In the first story listeners hear a completely context-free account of the second Lebanon war in 2006. The artist is described as having played “a ragged duet with the bombs falling on his home town” and “playing trumpet on the balcony while the Israeli air force was bombing Beirut”.

“You would see a hundred kids dead or a hundred persons. Then the second day it’s a hundred and seven. Then the third day it’s sixty-seven and you’re almost happy to say oh, it’s less than yesterday.”

How that war began and what was happening on the other side of the border have no place in this story – and neither does the all-important context of the Hizballah HQ in a specific neighbourhood of Beirut.

The second story’s location is Jenin and Ahmed Tobasi sets the scene by telling listeners that “when Israel was created” his grandparents left their village and “came here to Jenin refugee camp”. No context – such as the invasion of Israel by surrounding Arab states – is provided at all.

Wallen’s own account of her visit to Jenin is similarly devoid of context.

“On the surface Jenin city and its permanent refugee camp seem quite comfortable. As a privileged visitor you can begin to feel that life here is normal. But then you remember the journey: the separation barrier, checkpoints and soldiers. The watch towers dotting the ancient landscape.”

While Wallen tells listeners that the Freedom Theatre’s director was “assassinated”, she does not clarify that the murderer was a Palestinian. After Tobasi has admitted his membership of the Palestinian Islamic Jihad, Wallen gives an account of the second Intifada that promotes the notion of equivalence between Palestinian terror attacks and Israeli counter-terrorism measures.

“In 2000 when Tobasi was 15, the second Intifada started: a time of Israeli and Palestinian violence which changed the lives of a generation.”

The fact that Jenin was one of the main centres of terrorism during the second Intifada is not mentioned. All listeners hear of the terrorists from Jenin who blew up Israelis on buses and in restaurants is a feeble reference to “bomb attacks”.

“During the 2002 Battle of Jenin, Israeli forces – responding to bomb attacks – fought to control the Jenin refugee camp.”

“After the first five days when the 13 soldiers were killed, they went crazy. They start to destroy houses, to let tanks go inside the camp…”

The relevant fact that the terrorists in Jenin had booby-trapped buildings in the camp was not mentioned of course.

“The young people I saw rehearsing in Jenin were making wonderful, vibrant, physical theatre….partly a way of processing things that have happened to them. Things that are terrible and hard to understand. One boy suddenly showed me a phone picture of his friend lying dead in a body bag. He told me that he’d been shot just two weeks earlier by an Israeli soldier”.

Wallen’s one Israeli interviewee is a composer who tells stories from his military service. Thus, having whitewashed the many thousands of Israeli civilians whose lives were permanently blighted by Palestinian terrorism from the picture, she is able to opine:

“For the people I met in Jenin the suggestion of any comparison would be offensive. Their lives are not directly comparable.”

Notably, only her Israeli interviewee has questions to ask of himself.

“Who are we? What are we doing here and do we have the right to do the things that we’re doing? And how to live with all this? Artists of my generation who find themselves very often outside the borders of Israel have to ask themselves these questions”.

As readers may recall, this is the second time in just over a month that Radio 4 audiences have heard a context-free portrayal of events in Jenin during the second Intifada in programmes supposedly about entertainment or art.