On the early evening of August 13th members of the BBC’s domestic audience listening to BBC Radio 4 heard reports about the UK Labour Party leader’s participation in an event in Tunisia in 2014 that had been the subject of a report in a British newspaper three days earlier.

Listeners to Radio 4’s ‘PM‘ heard presenter Chris Mason introduce an item (from 36:15 here) with the inaccurate claim that the story was about antisemitism. [emphasis in italics in the original, emphasis in bold added]

Mason: “Jeremy Corbyn has been talking about antisemitism. Our correspondent Jonathan Blake is at Westminster. What’s he said, Jonathan, and specifically about what?”

Blake: “Well Chris, not for the first time Jeremy Corbyn has faced questions about his attendance at a wreath laying ceremony in Tunisia in 2014 at the Palestinian Martyrs’ Cemetery. He was in the country for a conference organised by the Tunisian president bringing together different Palestinian factions to try to form a unity government.”

Where Blake got the idea that the purpose of a conference titled the ‘International Conference on Monitoring the Palestinian Political and Legal Situation in the Light of Israeli Aggression’ was “to try to form a unity government” is unclear.

Listeners then heard Blake portray members of a terrorist organisation as “activists” and give a context-free description of an operation which took place in response to a terror attack in Cyprus that he failed to mention.

Blake: “And what is not in question is whether he laid a wreath to victims of an attack by the Israeli air force in 1985 on the headquarters of the Palestinian [sic] Liberation Organisation in which many people were killed. What is less clear is his involvement in the laying of a wreath at the graves of a memorial [sic] to the Palestinian activists who were suspected of being behind the Munich Olympics massacre in 1972 – members of the so-called Black September terrorist group. And they took hostage and killed 11 Israeli athletes. During a visit to the West Midlands Mr Corbyn was asked about this earlier on and spoke about attending the conference and whether he took part in that controversial ceremony. Here’s what he said.”

As for Blake’s claim that the wreath was laid at the graves of those “suspected” of being behind the Munich Olympics massacre – Fatah describes one of those buried there as “the head of the Black September organization’s department of operations and assassinations” and states that “He came up with the idea for the Munich operation”.

Listeners then heard a recording of Corbyn admitting what Blake had just told them was “less clear”.

Recording Corbyn: “A wreath was indeed laid by some of those who attended the conference for those who were killed in Paris in 1992.

Interviewer: “Were you involved in that wreath laying?”

Mason: “And listening carefully, Jonathan, to what he said there – ‘I don’t think I was actually involved in it’ – ehm…which appears to leave plenty of scope for his critics to criticise.”

Blake next cited reactions from two British politicians – while finding it necessary to mention the ethnic/religious background of just one of them: 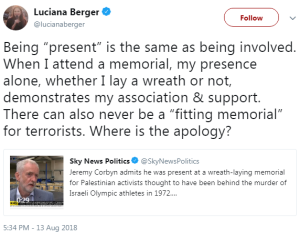 Blake: “It does and it’s one reason that it is probably not the last time Mr Corbyn will have to answer questions on this. Not only his political opponents – the Home Secretary Sajid Javid has said he should resign. One Labour MP – the Jewish Labour MP Luciana Berger has tweeted this afternoon criticising Mr Corbyn, saying ‘being present is the same as being involved. When I attend a memorial my presence alone, whether I lay a wreath or not, demonstrates my association and support. Where is the apology?'”

Blake went on to quote an earlier Tweet from the Labour Party which had already been shown to be inaccurate by Corbyn’s statements made on that West Midlands trip.

Blake: “Last year when he was asked about this Mr Corbyn said that he was there at the conference and at the headquarters and was laying a wreath to all those who died in the air attack on the PLO headquarters. But the Labour party are pushing back quite hard with a statement saying that the Munich widows are being misled – those were those quoted in this morning’s Daily Mail – Jeremy did not honour those responsible for the Munich killings.”

An hour later listeners to BBC Radio 4’s ‘Six O’Clock News’ heard another report from Jonathan Blake which was introduced by newsreader Neil Sleat (from 10:12 here) using the same bizarre description of terrorists. 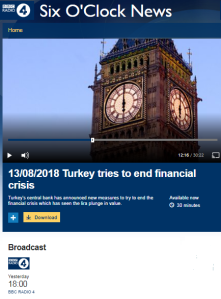 Sleat: “The Labour leader Jeremy Corbyn has appeared to admit to being present at a wreath-laying ceremony for the Palestinian activists suspected of being behind the Munich Olympics massacre but said he didn’t think he was involved in it. Mr Corbyn has been criticized for his controversial visit to the Palestinian Martyrs’ Cemetery in Tunisia in 2014. In the past hour the Israeli prime minister Benjamin Netanyahu said the laying of the wreath deserved unequivocal condemnation. Here’s our political correspondent Jonathan Blake.”

Blake then came up with a politicised description of terrorists and failed once again to provide BBC audiences with the context to the 1985 operation.

Blake: “Not for the first time Jeremy Corbyn’s attendance at a cemetery commemorating those who’ve died in pursuit of the Palestinian cause has been questioned. When this visit was criticised during last year’s general election campaign, Mr Corbyn said he had laid a wreath to commemorate the victims of an Israeli air strike on the headquarters of the PLO in Tunisia in 1985 and he confirmed that again today. The accusation against Mr Corbyn – which has seen the Home Secretary call for him to resign – is whether he took part in a ceremony where a wreath was laid at the graves of those accused of carrying out the attack on the Munich Olympics where 11 Israeli athletes were held hostage and killed. Mr Corbyn was asked about that on a visit to the West Midlands this afternoon.”

Yet again Blake found it necessary to mention a British MP’s ethnicity/religion and once again he amplified a Labour Party claim that had already been shown to be false.

Blake: “Saying that he didn’t think he was involved is unlikely to satisfy Mr Corbyn’s critics. The Jewish Labour MP Luciana Berger, who has been critical of Mr Corbyn’s handling of the antisemitism row within the party, said ‘being present is the same as being involved’ and asked ‘where is the apology?’. In response to the Daily Mail publishing criticism from the wives of those killed in the Munich massacre, a Labour Party spokesperson said their widows were being misled. Jeremy Corbyn did not honour those responsible for the Munich killings.”

So much for the BBC’s obligation to provide its funding public with “accurate and impartial news, current affairs and factual programming of the highest editorial standards so that all audiences can engage fully with issues across the UK and the world”.