Late on June 19th an article by Geeta Pandey headlined ‘How bulldozers became a vehicle of injustice in India’ was published on the BBC News website’s ‘India’ page. The report opens: 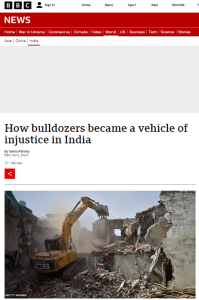 “Bulldozers, invented 100 years ago, have been used across the world to build homes, offices, roads and other infrastructures.

But in recent years, many say, they have become a weapon in the hands of India’s Hindu nationalist Bharatiya Janata Party (BJP) government to destroy homes and livelihoods of the minority Muslim community.”

Eight paragraphs in, readers find a dog whistle and a link:

“But the demolitions – which have drawn some comparison with Israel’s use of heavy machinery in the Palestinian territories – have been criticised in India and made headlines globally, with critics saying there is “only the thinnest veneer of legality covering this official action” and that they “are bulldozing over the very spirit of the law”.”

That link leads readers to an Amnesty International UK webpage promoting a campaign against the company JCB and partial presentation of a ‘case study’ about Khirbet Humsa which does not inform readers that in 2019 the Supreme Court ruled that the residents have no property rights in the location (i.e. the land does not belong to them), that the Bedouin are infiltrators on the land and that building there is unauthorised and illegal.

While that Amnesty International webpage is predictably problematic in itself, it does not make any reference to India and so is not an example of the “comparison” that Pandey clearly seeks to promote.

So who has made such a comparison? The dubious company that the BBC has chosen to keep includes the pro-Hamas ‘Middle East Monitor’ (MEMO), Ismail Patel of ‘Friends of Al Aqsa’ writing at the Qatar-linked ‘Middle East Eye’, a former Pakistani prime minister and a Pakistani Islamist conspiracy theorist among a few others.

Apparently Geeta Panday considered that opportunistic, politically motivated talking point touted by a handful of notoriously partisan outlets and commentators to be appropriate for amplification by a media organisation supposedly committed to accuracy and impartiality.

Update: The reference to Israel has been removed from the report.