The BBC continues to promote an allegation withdrawn by Hamas 12 months ago.

As noted here previously on May 14th the BBC News website published a backgrounder apparently intended to mitigate weeks of context-free amplification of (unsuccessful) calls to boycott the Eurovision Song Contest being held in Tel Aviv.

Produced by ‘Newsbeat’ – the department of BBC News which purports to produce “news tailored for a specifically younger audience” – and titled “Eurovision 2019: The Israeli-Palestinian situation explained”, the unattributed article is tagged ‘Gaza border clashes’.

The article opens by telling BBC audiences that:

“This year’s Eurovision has an extra layer of controversy – because it’s being held in Israel. […]

But there have been calls to boycott the event by critics of Israel’s policies towards Palestinians in the occupied West Bank and Gaza.”

What “Israel’s policies” are is not properly explained anywhere in the article. Policies such as the supply of electricity and provision of medical treatment to Palestinians of course do not get a mention. Readers are then materially misled by the following portrayal of the conflict:

“The conflict between Israel and the Palestinians has gone on for decades, and the dispute over land is at its heart.” [emphasis added]

The BBC’s adoption of that inaccurate notion of course means that it does not have to explain to its audiences the issue of Muslim objection to the presence of the Jewish state in the Middle East.

The article continues with a sub-section purporting to outline the history behind the conflict in which the Arab riots of the 1920s and 1930s are whitewashed. Ignoring the Arab violence which followed the UN Partition Plan vote, the article moves on to “The creation of Israel and the ‘Catastrophe’”.

“In 1948, unable to solve the problem, British rulers left and Jewish leaders declared the creation of the state of Israel.

Many Palestinians objected and a war followed. Troops from neighbouring Arab countries invaded.

Hundreds of thousands of Palestinians fled or were forced out of their homes in what they call Al Nakba, or the “Catastrophe”.”

That link leads to a problematic article published a year ago in which Palestinians are exclusively portrayed as totally passive victims and all mention of the responsibility of the Arab leaders who rejected the 1947 Partition Plan and subsequently started the war that led to their displacement is missing.

The displacement of Palestinians did not take place – as the BBC would obviously have its audiences believe – only after Israel declared independence on May 14th 1948. In fact:

“Roughly half of those fleeing did so between November 1947 (when Palestinian Arabs responded to the United Nations partition recommendation with anti-Jewish violence) and May 1948 (when the armies of Egypt, Jordan, Syria, Iraq and Lebanon invaded Palestine).”

The BBC carefully avoids thorny topics such as Palestinian hereditary refugee status and the reasons why Palestinians living in Palestinian controlled areas are still defined as ‘refugees’. The issue of certain Arab countries’ deliberate policy of discriminating against Palestinians and keeping them in perpetual refugee status for over 70 years is of course not mentioned in this ‘backgrounder’.

“Israel still occupies the West Bank, and although it pulled out of Gaza the UN still regards that piece of land as part of occupied territory.” [emphasis added]

No explanation of the background to that highlighted statement is provided.

In a sub-section titled “What’s happening now?” readers are told that:

“Gaza is ruled by a Palestinian militant group called Hamas, which has fought Israel many times. Israel and Egypt tightly control Gaza’s borders to stop weapons getting to Hamas.” [emphasis added]

Hamas has of course never “fought Israel” in the accepted sense of the term: rather, it is a terror group which targets Israeli civilians. Unsurprisingly the decades of terrorism perpetrated by Hamas and other Palestinian factions against Israeli civilians have no place in this dumbed-down BBC backgrounder. 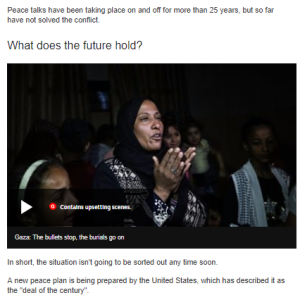 In the final section of this article readers are shown a video captioned “Gaza: The bullets stop, the burials go on”. That filmed report by the BBC’s Middle East editor Jeremy Bowen was first aired in May 2018 and it includes a section narrated by Bowen as follows:

Bowen: “Poverty and grief breed anger. And so do the deaths of children. A family gathered for another funeral. It was for Layla al Ghandour who was eight months old.”

“The day before this report was aired on BBC One and posted on the website, conflicting accounts of the baby’s death had already emerged with both a Gaza doctor and her father stating that she had a pre-existing medical condition. Nevertheless, the BBC did not edit out that part of Bowen’s report implying that the child’s death was linked to Israel’s response to the incidents along the border.”

Moreover, Hamas subsequently removed the baby’s name from its list of casualties and further information concerning the circumstances of her death later emerged.

Despite those developments, the BBC failed to remove multiple items from its website (available to this day) in which viewers are given to understand that Israel was connected to the baby’s death. BBC Watch therefore submitted a complaint to the BBC on that issue in June 2018 and two months later received a reply concerning some of the items from Sean Moss at the BBC News website which included the following claims:

In this piece we attribute both the baby’s death and the wider figures to the “Hamas-run” health ministry. We don’t mention the cause of death or otherwise draw any specific connection between this death and Israeli action.

Jeremy Bowen does not say that the baby was killed by the army and he leads into this part of his report by saying ‘poverty and grief breed anger – and so do the deaths of children,’ which is true.”

BBC Watch subsequently contacted both the BBC’s Editorial Complaints Unit and OFCOM, pointing out in regard to the first item that:

“…the report is specifically about Palestinians who died during those “protests” and it is obviously not about Palestinians who coincidentally happened to die for other reasons at the same time. Readers would therefore understandably conclude that the baby was among those “killed on Monday when Israeli troops opened fire” and Moss’ claim that “We don’t…draw any specific connection between this death and Israeli action” is inaccurate and disingenuous.”

With regard to Bowen’s report we noted that:

“The synopsis […] states “More funerals have taken place for the Palestinians killed by Israeli troops in Gaza on Monday” and so again obviously viewers would understand that its topic is ‘Palestinians killed by Israeli troops’. Given that and the fact that immediately before showing footage of the funeral of “Layla al Ghandour who was eight months old” Jeremy Bowen had profiled a person described as having been “shot through the eye during the protests”, it is clear that Moss’ claim that “Jeremy Bowen does not say that the baby was killed by the army” is also disingenuous: Bowen did not have to say that because the case had already been signposted.”

To this day BBC Watch has not received a satisfactory response on this serious issue from either the BBC or OFCOM. Now – one year on – we see that the BBC continues to promote the claim that Israel was responsible for the death of a baby in the Gaza Strip in 2018 despite the fact that even Hamas backtracked on that allegation twelve months ago.