The Protestant Church of Germany has canceled an event that was scheduled to feature two hardcore pro-BDS activists, one of whom has ties to fund-raising for the Popular Front for the Liberation of Palestine, which the EU and the US have designated a terrorist organization.

“We at Church Day have a clear attitude and have therefore asked the @rosaluxstiftung to disinvite the controversial speakers or to cancel the event,” the church tweeted on Thursday. “The foundation has canceled the event planned for Friday.”

After a series of Jerusalem Post investigative reports on the bank account of the pro-BDS group Jewish Voice for a Just Peace in the Middle East, the German Bank for Social Economy closed the organization’s account on Thursday.

Iris Hefets, spokeswoman for Jewish Voice, confirmed to the left-wing daily taz that the bank pulled the plug on the group’s account because Jewish Voice refused to stop promoting the Boycott, Divestment and Sanctions (BDS) campaign against Israel.

The Wiesenthal Center included the bank in its 2018 top 10 list of worst outbreaks of antisemitism.

Hefets told taz, a publication sympathetic to pro-BDS media coverage, that the account was closed due to “political reasons” and said it was “political censorship.” The formal closure of the account will take place by the end of this week, wrote the paper.

For First Time at UN, India Votes With Israel and Against Group With Ties to Terror

JNS.org – For the first time ever, India voted last week with Israel at the United Nations against granting observer status to a Palestinian human rights organization named “Shahed.”

The motion at the UN Economic and Social Council (ECOSOC) was rejected by a 28-14 tally. 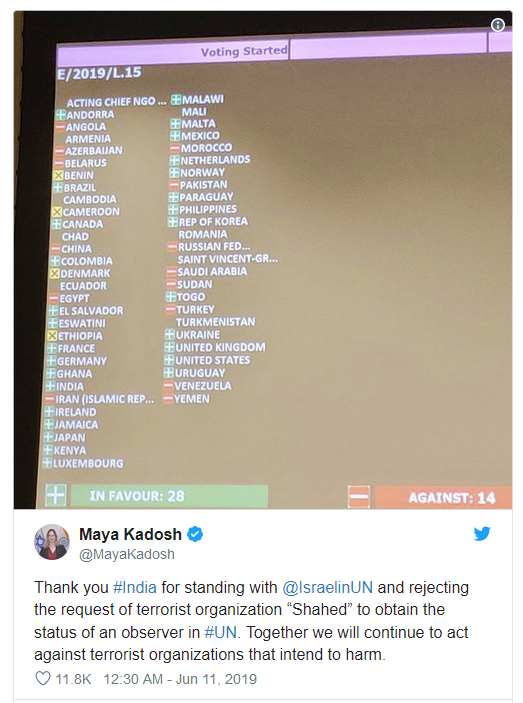 Israel has quietly waged a two-year financial campaign against organizations promoting a boycott of the Jewish state by revealing their connections to terror operatives, leading to the closures of dozens of fundraising accounts, the Ministry of Strategic Affairs said Monday.

The campaign targeted fundraising accounts for groups promoting the Boycott, Divestment and Sanctions (BDS) movement against Israel that were hosted on platforms like PayPal and DonorBox.

Under the direction of the ministry, pro-Israel activists alerted the platforms to violations in their regulations banning fundraising activities connected to terrorism.

The effort shuttered 10 accounts based in the US and 20 in Europe, the ministry said.

Pro-Israel activists involved in the effort included legal NGOs, Jewish groups based in the US and France, and journalists based outside Israel, Channel 13 reported.

“For years, boycott promoters have disguised themselves as ‘human rights activists,’ managing to raise tens of millions of euros from Western countries and citizens who thought they were contributing to causes supporting justice and equality. Over time, though, we have revealed that the supposed ‘human rights’ NGOs are in reality filled with anti-Semitic operatives with deep ties to terrorist groups fixated on destroying the State of Israel,” Strategic Affairs Minister Gilad Erdan said in a statement.

Minister of Tourism Yariv Levin: “Tourism continues to break records with the rise in incoming tourism to Israel. June continues the growth trend, thanks to the innovative marketing which is bearing fruit and bringing results.

Today sees the grand opening of a new, official retail store for Nintendo, fourteen years since the first one arrived back in 2005.

The store is located at the Dizengoff Center, a shopping mall in Tel Aviv, Israel. It’ll be opening at 6pm local time today (so that’s 8am PT / 11am ET / 4pm UK / 5pm CET) and a live countdown has begun on its official website. The opening comes just a couple of months after the country received an official online store.

It’s amazing to think that up until now, Nintendo has only had one retail store across the entire planet. Nintendo New York first opened its doors back in May 2005 after a complete rebranding; originally, the building was actually a Pokémon-specific shop. A Tokyo store is planned to be joining both the New York and Tel Aviv stores later this year, taking the grand total up to three.

Direct flights from Tel Aviv to Tokyo to begin in March

El Al announced that it will launch a direct line from Tel Aviv to Tokyo in March, a move immediately hailed by the Foreign Ministry and expected to be a vehicle leading to a further flourishing of Israeli-Japanese ties.

“The importance of a direct air link between countries is basic, it brings the countries closer together and will enable bringing an increasing number of tourists to Israel, which is important, and also increase the number of investors who will arrive,” said Yaffa Ben-Ari, Israel’s ambassador in Tokyo, in a telephone interview.

The total valuation of Israeli tech exits in the first half of 2019 amounted to $14.48 billion over 66 deals, according to a new report published Thursday by Israel-based research firm IVC Research Center and Israel-based law firm Meitar Liquornik Geva Leshem Tal. Not including the $6.9 billion acquisition of Mellanox Technologies Ltd., announced in March and still yet to be completed, the total sum of exits stood at $7.58 billion, the highest in five years.

Bet Shemesh Engines, a small Israeli manufacturer of jet engine components for some of the world s leading aerospace companies, said on Monday it has signed a long-term contract with Pratt Whitney Canada.

The Israeli company hiSky has established a UK limited company – hiSkySat Limited – based in London, with an R&D centre at Harwell to develop a satellite communications network management system (NMS) and operation centre.

The UK Space Agency provided £9 million of funding for hiSky to develop cutting-edge space telecoms technology at the Harwell Space Cluster, which is growing fast and already home to more than 90 space companies.

Israel on Monday said it has joined the Digital Development Partnership (DDP) of the World Bank to promote digitalization and cybersecurity in the developing world.

By joining the partnership, Israel will for the first time join hands with a global community of developers from Japan, the UK, Finland, Denmark, and Norway and entities like the GSMA, a trade body that represents the interests of mobile network operators worldwide, to provide technical assistance to countries in Africa, Latin America, Eastern Europe and Asia, and build up their cybersecurity resilience.

Building on the rock-solid relationship between the United States and Israel when it comes to the sharing and transfer of technology on the national level, now there are a few significant American cities looking to Israel for its world-leading expertise in cybersecurity. One of these is New York.

Venture capitalist Erel Margalit has taken 12 companies public on Nasdaq and is responsible for building some of the most successful big data, artificial intelligence and cybersecurity startups that have come out of Israel. But after 25 years, Margalit has now turned his focus towards food and agriculture technology—what he calls the last frontier of investing. His firm Jerusalem Venture Partners has raised more than $1.4 billion across 9 funds, and has recently invested in startups like InnovoPro, a seller of vegan protein made from chickpeas, and DouxMatok, a flavorings company that has isolated a sugar substrate so that 40% less can be used to provide the same level of sweetness. Opportunity abounds: JVP estimates there are more than 230 food and ag tech startups in the country.

Brazilian music superstar Milton Nascimento issued a sharp rebuke on Sunday to the anti-Israel BDS movement, which sought to stop him from playing a concert in Tel Aviv tonight, saying, “I will never abandon my public.”

“It’s my Israeli fans who brought me here, and a lot of these fans are Brazilians living in Israel,” Nascimento pointed out.

Regarding the charge that he was aiding an evil regime by playing in Israel, he said, “During the Brazilian military dictatorship, I never stopped playing in my country, so why would I stop playing now?”

“Even if I disagree with the ideas of a government, I will never abandon my public,” he added. “After all, it is the people who matter.”

“Today, I am here to celebrate peace and everything that unites us,” Nascimento concluded.

The talented @JLo will be performing in #Israel for the first time ever this coming August.

Who is excited? 🎉 🎈 🇮🇱 pic.twitter.com/2nwCUzAQ8R

The festival will feature performances by international and Israeli artists of authentic Klezmer music as well as Klezmer fused with Jazz, ethnic music, tango, religious music and classic rock. The concerts will take place at various venues around Jerusalem, including the Jerusalem Theater and The Bible Lands Museum.