HB 3967 makes it clear Oklahoma will not do business with companies that boycott Israel & declares them as a prominent trading partner with our state. Thank you Rep. McBride & Sen. Weaver for your hard work! pic.twitter.com/8SJRpWo0vq

(CNN)Germany announced Thursday it has designated the Lebanese militant and political group Hezbollah a terror organization, banning all of its activities in the country and ordering raids on sites police say are linked to the group.

Police told CNN a number of properties in Berlin, Bremen and North Rhine-Westphalia were searched early on Thursday. According to the police and the German Interior Ministry, four mosques and cultural associations were raided, as well as private homes of their board members, treasurers and tax advisers.

The page, titled “Joe Biden and the Jewish community,” vows that the presumptive Democratic nominee will “firmly reject the BDS movement, which singles out Israel — home to millions of Jews — and too often veers into anti-Semitism, while letting Palestinians off the hook for their choices.”

While much of the page details Biden’s plan to combat the rapid rise of anti-Semitism within the United States, a significant portion of it also details the candidate’s Israel policy.

The Missouri state legislature passed a bill SB 739, the “Anti-Discrimination Against Israel Act.”.

The state’s House of Representatives passed the measure, 95-40, while the state Senate did so, 28-1, on April 30. Gov. Mike Parson, a Republican, is expected to sign it into law, which would make Missouri the 28th state to enact such a measure to combat the anti-Israel BDS movement.

The legislation would prohibit Missouri and its political subdivisions from entering into contracts worth more than $100,000 with companies with 10 or more employees that engage in BDS.

Moreover, it exercises the state’s freedom to choose firms for contracts. It does not penalize or infringe on any individual’s right to free expression, or penalize companies that choose not to do business with Israel for legitimate economic reasons.

(CN) — In litigation challenging a Texas law blocking state agencies from hiring companies boycotting Israel, the Fifth Circuit ordered dismissal of the case Monday but declined to decide if the law is constitutional.

Bahia Amawi, a Palestinian U.S. citizen, had worked for the Pflugerville Independent School District for nearly a decade as a speech therapist for kindergarteners when the school district offered to renew her contract for the 2018-2019 school year.

She refused due to a new clause in the contract requiring her to certify that she does not boycott Israel nor would she do so while working for the school district.

Texas joined 25 other states with similar legislation when lawmakers passed House Bill 89 and Republican Governor Greg Abbott signed it in 2017.

The so-called “No Boycott of Israel” bill’s sponsor, Representative Phil King, R-Weatherford, told news outlets in 2017 he introduced the legislation because as a Christian he felt his religious heritage is linked to Israel and the Jewish people, America’s national security depends on having Israel as an ally in the Middle East, and Texas has a large Jewish population and does a lot of business with Israel.

Israel is part of a new initiative led by Austria of relatively small countries that feel they have succeeded in beating Covid-19, for the time being. The countries would open their borders between each other, in order to boost their tourist industry and help revive their economies. The first meeting of the ‘immune countries alliance’ took place last week online with the participation of Denmark, Greece, the Czech Republic, New Zealand, Australia, Austria and Israel.

Israel wants to introduce direct flights to Australia and waive quarantine requirements for travellers by December, as countries that have so far successfully contained Covid-19 jostle to be the next destination added to the Australia-New Zealand tourism bubble.

Israel, seeking to make permanent the roughly 17-hour direct flight from Tel Aviv to Melbourne or Sydney, is also working with other nations to position itself as a gateway hub for Australian travellers to transit quarantine-free on their way to European countries considered safe, such as Greece, Norway, Denmark and the Czech Republic.

The e-commerce giant Amazon announced over the weekend it is relaunching it has renewed its shipping services to Israel after deliveries had been halted following the coronavirus outbreak.

Israeli consumers, however, might be left disappointed since the free shipping option – normally offered by the company on purchases over $49 – has not been renewed and it appears the company only offers express shipping at a much higher cost.

The company stopped shipping to Israel on March 22 in the wake of the COVID-19 outbreak, saying it would focus on deliveries of essential goods within the U.S. and few other selected countries.

Hosted from Tel Aviv, the “Big in Japan” webinar discussed how despite Covid-19 and perhaps because of it, Japanese interest in Israeli startups is growing. 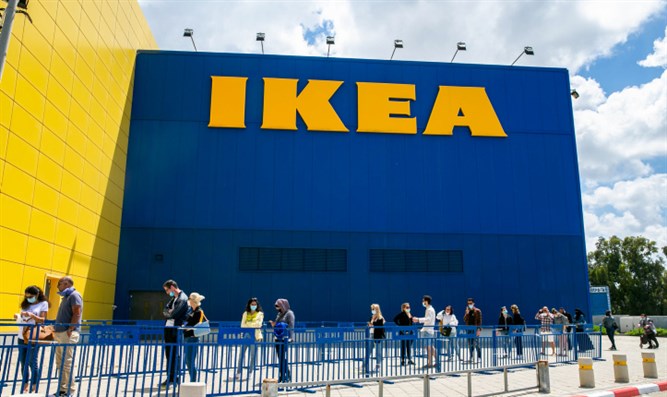 Despite the Covid-19 crisis and the gradual reopening of the Israeli economy, Swedish furniture giant IKEA opened its sixth store in Israel today at Moshav Eshtaol near Beit Shemesh. The company has invested NIS 390 million in building the store and it is being opened despite the building violations committed during construction. The Jerusalem District Appeals Committee decided last week to overlook the contraventions of planning laws due to the jobs being created in this time of high unemployment.

The number of Israeli sellers on eBay rose by 40% in April compared with March, eBay has told “Globes.” eBay also said that there was a 46% rise in sales of products by Israeli sellers over the same period.

The new Israeli sellers on eBay are small and medium sized businesses, 60% of whom do not have their own website. Israeli sellers sold goods worth an estimated tens of millions of dollars in the first quarter of 2020. 85% of products currently being sold on eBay by Israeli sellers are new products.

In the first four months of 2020, Israeli sellers sold 800,000 ‘isolation products’ ranging from hygiene goods to leisure items. 500,000 of these products were sold in March and April. eBay says that these are exceptionally high numbers compared with regular times. Although there is a relaxation of the lockdown in Israel, there is not in many other countries worldwide, so that sales by Israelis of such items as games and home fitness accessories are still on the rise.

Will BDS supporters agree to have this system implemented where they swim?

Israeli scientists said Tuesday they are in the advanced stages of developing a disinfectant that works for months, and claim it will be a “game changer” for hygiene during the pandemic, finally making it possible to disinfect surfaces in public places and keep them virus-free.

“You see pictures in the news everywhere of people in white suits spraying disinfectant, but they have to repeat this several times a day because the disinfectant doesn’t stay active,” said Shady Farah of the Technion – Israel Institute of Technology. “With our material you only need to spray once, and protection stays for several months.”

The research behind the new disinfectant has not yet been submitted for peer review.

Israel’s Gamida Cell, the manufacturer of a stem cell therapy that aims to increase the success of bone marrow transplants in blood cancer patients, said on Tuesday that a key late-stage clinical trial of its treatment has yielded positive results and met a major target.

Those who were injected with the treatment containing expanded and enhanced stem cells had a median time of neutrophil engraftment that was significantly shorter than those that did not receive the drug: 12 days compared with 22 days for patients who received a standard umbilical cord blood transplant, the company said. Neutrophil engraftment is a measure of how quickly stem cells received in a transplant are established and begin to make healthy new cells. A rapid neutrophil engraftment has been associated with fewer infections and shorter hospitalizations.

Top BDS activist Omar Barghouti has been widely mocked on social media after he said that it would be permissible for boycotters of Israel to use an Israeli-developed vaccine for the coronavirus.

“If you use medical equipment from Israel — it’s not a problem. Cooperating with Israel against the virus — to begin with, we do not consider it normalization,” he said in an Arabic-language Facebook live broadcast.

Why #BDS is wrong:
1. It doesn't promote peace or coexistence.
2. Its back-office are terrorist organizations and/ or Anti-semites.
Also, what's this boycott Israeli everything, except Israeli medication? https://t.co/tep6vvmKN7

Two series broadcast across the region in the first three days of the Muslim holy month have stirred both surprise and contention – one by daring to explore the Jewish history of the Gulf, the other by suggesting that Israel may not be an enemy and that Palestinians have been ungrateful for Saudi Arabia’s support.

Eden Alene to represent Israel at next year’s Eurovision

Eden Alene, who was set to represent Israel at this year’s Eurovision Song Contest, which was cancelled due to coronavirus crisis, will officially represent the country at the prestigious competition next year.

The song, however, which was chosen to represent the country this year cannot be performed at Eurovision 2021, according to The European Broadcasting Union’s rules.

The song, “Feker Libi,” premiered less than three weeks ago and has been hailed as the potential frontrunner to take the top spot at this year’s event.

Alene, Israel’s first ever Ethiopian contestant to represent the nation at Eurovision, won the chance to represent her country after winning the “The Star is Born” reality singing competition in February.

American singer Kelly Clarkson on Thursday released a duet with Israeli singer Maya Buskila titled “I Dare You”- with both singers singing in Hebrew.

The song is part of a multi-national project by Clarkson and includes the same song in other languages such as Arabic, French, German and Spanish.

With fire and music, performers bring Ramadan to fun-starved Jerusalem 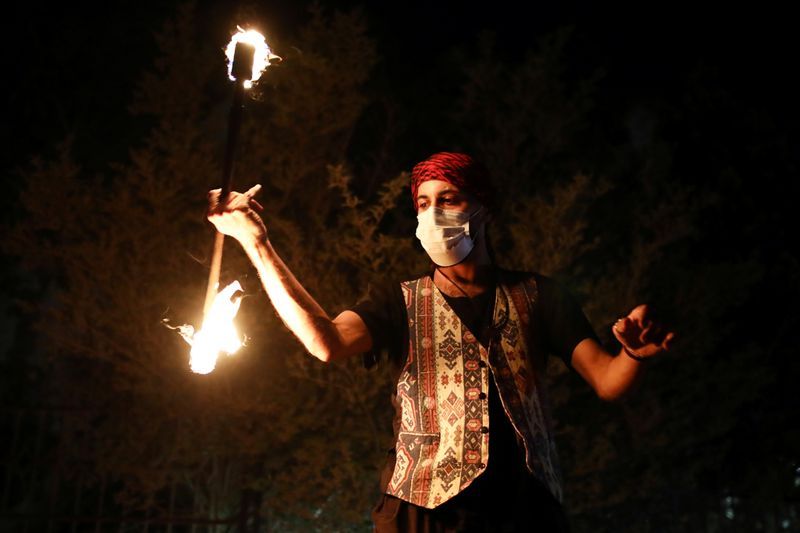 As virus dampens mood of the holy month, youth group decides to bring cheer to the residents of East Jerusalem by driving around the neighborhoods on lit wagon topped by a Ramadan Fanoos

Amid movement restrictions, partial lockdowns and the suspension of public prayers at mosques – including Al-Aqsa Mosque and the Dome of the Rock – Al-Baha youth group realized there was little chance of audiences returning soon to their social and cultural shows.

So this year, each night after iftar, they hitch a car to a festively lit wagon topped by a Ramadan Fanoos (lantern) and drive around the streets of East Jerusalem neighborhoods such as Sheikh Jarrah, with musicians playing and singing Ramadan songs beneath street decorations.

Top Israeli judoka Sagi Muki has raised over quarter of a million shekels, by auctioning off memorabilia, meant to aid a hospital in his hometown in the fight against coronavirus.

The judoka, who won 2019 Judo World Champion as well as 2015 and 2018 European championships, a month ago begun selling his memorabilia as part of a campaign to raise funds for the Laniado Hospital in his hometown of Netanya, to help the medical center buy more ventilators to treat seriously ill COVID-19 patients.

The most sizable donation was made by a Jewish-American donor from Florida, who bought the judo suit Muki wore during his victory in the 2019 Judo World Championship, for no less than NIS 50 thousand.

Like Loading...
Tags from the story
BDS, bds-fails, Boycott, Boycott Divestment and Sanctions, Israel
Written By
Adam Levick
More from Adam Levick
Once again, the Guardian has done what it does best: deceive readers...
Read More