The failure to provide context to an incident brought up by Sackur prevents audience understanding.

In the February 26th edition of the BBC programme ‘Hardtalk’ presenter Stephen Sackur interviewed the director of the Gaza Community Mental Health Programme.

The interview was aired on the BBC News and BBC World News television channels (available in the UK here) and an audio version was aired on BBC World Service radio. 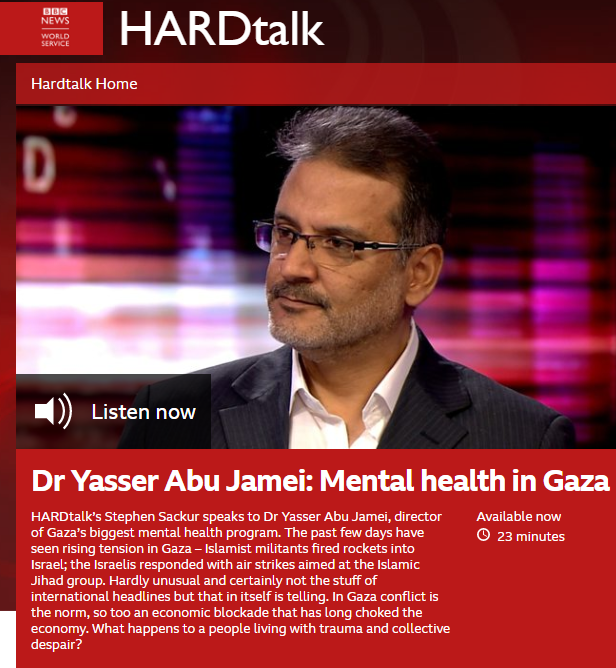 “HARDtalk’s Stephen Sackur speaks to Dr Yasser Abu Jamei, director of Gaza’s biggest mental health program. The past few days have seen rising tension in Gaza – Islamist militants fired rockets into Israel; the Israelis responded with air strikes aimed at the Islamic Jihad group. Hardly unusual and certainly not the stuff of international headlines but that in itself is telling. In Gaza conflict is the norm, so too an economic blockade that has long choked the economy. What happens to a people living with trauma and collective despair?”

Despite BBC editorial guidelines concerning “Contributors’ Affiliations” which state that audiences should be informed of “their affiliations, funding and particular viewpoints”, that information was not provided in relation to the GCMHP or its founder, whom Sackur brought up during the conversation.

Stephen Sackur’s introduction to the interview made no mention of the core issue of Hamas terrorism and even cancelled out the trauma suffered by residents of southern Israel with his use of the word “unique”. Failing to explain why there are people classed as “refugees” in a territory under the exclusive control of Palestinians for almost a decade and a half, he described his interviewee as: [emphasis in italics in the original, emphasis in bold added]

Sackur: “…an experienced psychiatrist working in a place which poses unique and daunting mental health challenges. The Gaza Strip is home to 2 million people. The majority are young, impoverished and classed as long-term refugees. They’ve been raised in a place of conflict where bomb-blasts, insecurity and sudden death have been constant facts of life. Not only that, Gaza is a densely populated enclave cut off from the outside world by fortified barriers. Israel and Egypt control access in and out for people and goods. It is, in short, a mental health pressure cooker and from time to time the lid blows off. Anger, violence, despair, drug addiction, childhood trauma: all are commonplace. But what can under-staffed, under-resourced mental health professionals do to help? Are the people of Gaza suffering extreme levels of mental illness or simply reacting normally to a uniquely grim situation?”

The interview followed a sadly predictable pattern, with Sackur failing to effectively challenge most of his interviewee’s politically motivated talking points. Even when he did raise issues such as Hamas’ staging of the ‘Great Return March’, the Hamas-Fatah feud and incitement in Palestinian school text- books, he failed to adequately challenge the inadequate responses given.

After the broadcast of the programme, the BBC News website chose to upload a clip to its ‘Middle East’ page under the headline “Mental health: Coping with the trauma of living in Gaza”. The video’s synopsis includes the following: 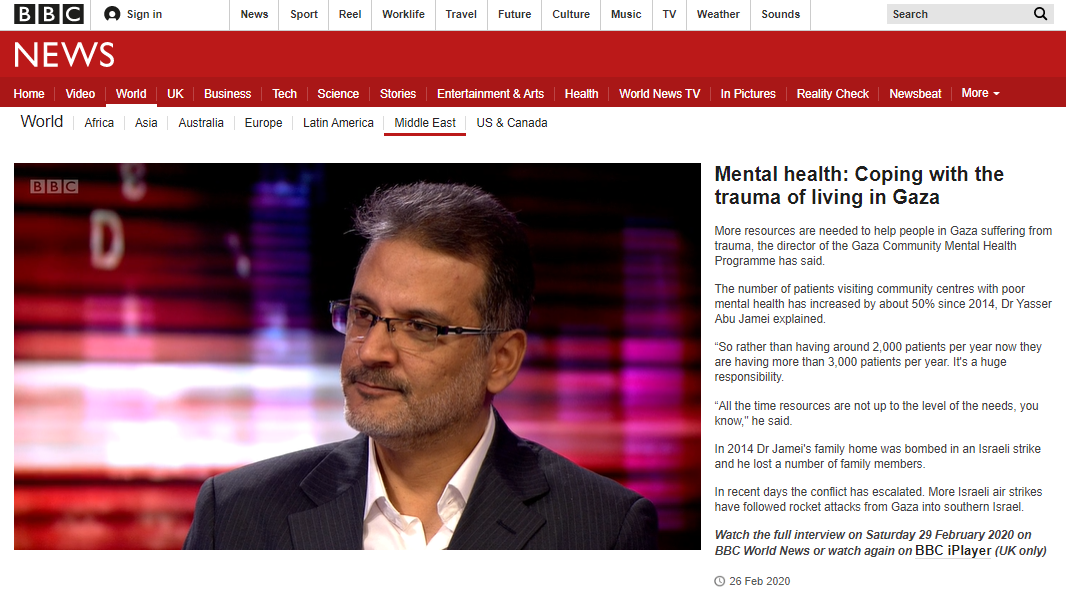 “In 2014 Dr Jamei’s family home was bombed in an Israeli strike and he lost a number of family members.”

The clip itself begins with that event.

Sackur: “I am very mindful that in 2014 your own family home was bombed, destroyed, by an Israeli military strike. Tell me how many members of your extended family were lost.”

Abu Jamei: “Ah…well we live in an area that is the eastern side of Khan Younis and unfortunately my family endured the biggest loss when it comes to the number of people. You know every single life matters a lot to everyone, you know, but in that simple attack 27 people were killed including three pregnant women and I think seven…seven children. A three-storey building was levelled to the ground basically, you know…”

BBC audiences were not provided with any further context to that account.

The day after that incident – which took place on July 20th 2014, the political NGO B’tselem noted that:

“B’Tselem’s initial findings indicate that the likely target of the attack was Ahmad Suliman Sahmoud, a member of Hamas’ military wing, who was visiting a member of the family.”

Sahmoud was identified (number 446 on the list here) as an Izz al-Din al Qassam Brigades commander.

The IDF Magistrate Advocate General subsequently launched an investigation into that incident.

The results of that investigation (number 12 here) showed that: [emphasis added]

“…on 20 July 2014, IDF forces carried out an aerial strike on a structure in use by Palestinian terrorist organizations for military activities against IDF forces maneuvering in the area. The strike intended to target the military infrastructure in the structure as well as a command level military operative, who according to real-time intelligence was commanding military operations against IDF forces from within the structure. During the planning and execution stages of the strike, which took approximately 24 hours, additional information about the structure was received, which corroborated the understanding that the structure contained military infrastructure that presented clear and immediate danger to IDF forces maneuvering in the area.[…]

Contrary to the allegation [inter alia from B’tselem – Ed.], it was found that a number of warnings were issued in the area of the strike, using various means, which called on civilians to evacuate from the area. It was further found that it would not have been possible to provide a specific warning to those present in the structure prior to the strike, as such a warning was expected to frustrate the objective of the attack. Moreover, it was also found that because the precise location of the military activity in the structure was not known, the strike could not be limited to a particular portion of the building. […]

After reviewing the investigation’s findings, the MAG found that the attack process in question accorded with Israeli domestic law and international law requirements. The decision to attack was taken by the competent authorities, and the attack was aimed at a military objective – a structure used by Palestinian terrorist organizations for military activities against IDF forces maneuvering in the area, and a command level military operative present therein.”

That information was denied to BBC viewers and listeners worldwide even though it has been in the public domain since August 2018. In other words, BBC audiences were given a partial account which conceals essential information and thus prevented from forming their own opinions on the incident as well as about the interviewer and interviewee presenting it in that one-sided fashion.

BBC reports on Wafa hospital shown to be inaccurate

BBC News passes up on the chance to correct Gaza misinformation

A BBC story from August 2014 still in need of clarification

Revisiting the BBC’s claims about a 2014 story from Rafah