BBC audiences were denied information that conflicts the chosen narrative.

A report published on the BBC News website’s ‘Middle East’ page on the morning of March 2nd under the headline “Israelis vote in unprecedented third general election in a year” closed with a section headed “Does this election matter?” in which – predictably – the BBC brought up the topic of the US Administration’s ‘Peace to Prosperity’ proposal that was made public in January. 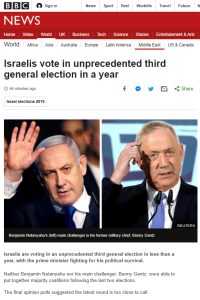 Readers were told, inter alia, that:

“The US plan also proposes ceding a cluster of Israeli-Arab towns and villages into a future Palestinian state – effectively transferring Arab citizens out of Israel.

Israeli Arabs, who comprise about 20% of Israel’s population and often complain of discrimination, have been angered by the suggestion.”

Similar messaging was promoted by the BBC’s Jerusalem-based correspondent Tom Bateman in a report aired in the March 1st edition of the BBC World Service radio programme ‘Newshour’ (from 45:05 here). [emphasis in italics in the original]

Bateman: “There’s been a deep anger among many Arab Israelis. There were new laws [sic] asserting Jewish sovereignty by Benjamin Netanyahu’s Right-wing nationalist government and recently the Trump plan; offering to swap hundreds of thousands of people in Arab Israeli towns into a Palestinian state in return for Israel getting the Jewish settlements in the West Bank.”

The “new laws” to which Bateman refers is actually one law – the Nation State Law passed in July 2018 – which the BBC covered badly at the time.

The US proposal states: [emphasis added]

“Land swaps provided by the State of Israel could include both populated and unpopulated areas.

The Triangle Communities consist of Kafr Qara, Ar’ara, Baha al-Gharbiyye, Umm al Fahm, Qalansawe, Tayibe, Kafr Qasim, Tira, Kafr Bara and Jaljulia. These communities, which largely self-identify as Palestinian, were originally designated to fall under Jordanian control during the negotiations of the Armistice Line of 1949, but ultimately were retained by Israel for military reasons that have since been mitigated. The Vision contemplates the possibility, subject to agreement of the parties that the borders of Israel will be redrawn such that the Triangle Communities become part of the State of Palestine. In this agreement, the civil rights of the residents of the triangle communities would be subject to the applicable laws and judicial rulings of the relevant authorities.”

An explanation of that reference to “negotiations of the Armistice Line of 1949” can be found here.

Neither Tom Bateman nor the writer of the BBC News website report bothered to inform BBC audiences that both the main contenders for the post of prime minister of Israel in this election have already rejected that possibility raised in the US proposal.

“The Triangle area in Israel’s North will not become part of a Palestinian state, Prime Minister Benjamin Netanyahu said in an interview with Israeli Arabic-language channel Hala TV on Tuesday night.

Asked about the section of US President Donald Trump’s peace plan that raises the possibility of trading the predominately Arab Triangle area – which includes Umm el-Fahm, Kafr Kara, Baka al-Gharbiya and more – to the Palestinian Authority, Netanyahu responded: “There is some vague statement [in the plan] that has no meaning.”

“There will not be any population transfers under any circumstances: I oppose it in principle,” he added.

In recent years and in the immediate aftermath of the plan’s release last month, Netanyahu said that he will not have people forced from their homes on the Israeli or Palestinian side.

The US “Peace to Prosperity” plan did not call for any populations to be moved but did suggest that the border could be redrawn such that the Triangle’s approximately 250,000 Arab citizens of Israel be in a future Palestinian state. However, this was not a core point: the map in the 180-page plan shows Israel swapping land in the Negev near Gaza and Egypt with the Palestinians, and keeps the Triangle in Israel.

The idea of swapping the Triangle was highly controversial and sparked protests in the North and in Tel Aviv. Blue and White leader Benny Gantz has said he opposes it.”

In short, worldwide audiences were once again denied information that erodes the narrative the BBC has chosen to promote – in this case that of supposed background to the “anger” of Arab Israeli voters.

How will the BBC cover Israel’s election?