For nearly two decades the Arab politician Ahmad Tibi has been the bogeyman of Israeli prime minister Benjamin Netanyahu’s race-baiting political campaigns. As chairman of the Joint List Faction of Arab Parties, Mr Tibi was presented by Mr Netanyahu as a danger to Israel’s Jews: a symbolic threat used by the four-time premier to get rightwing Israelis to keep voting him in.

“All these posters on the street, they were a horrible incitement against me, and an attempt to delegitimise Arab voters,” Mr Tibi told the Financial Times, describing Mr Netanyahu’s various election campaigns since the 1990s. “He was saying look, ‘this is Ahmad, the Arab, who will take over the government unless you, a rightwinger, vote for me.’”

The Joint List’s support for Mr Gantz has enraged Mr Netanyahu, who regularly describes Israel’s Arab politicians, that represent some 20 per cent of the population, as supporters of terrorism.

There wasn’t one critical word about Tibi, or any other Joint List MK, in the article. 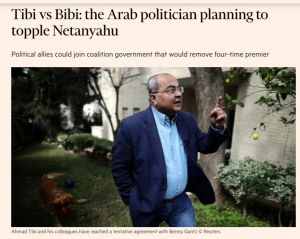 Let’s be clear: Though the prime minister has at times engaged in race baiting in reference to Arabs, it is also undeniably true that, as we’ve posted about previously, many Joint List MPs, such as Ahmed Tibi, are extremists who have explicitly supported terrorism.

Tibi, previously an adviser to Yassar Arafat, has claimed that there were never two Jewish Temples in Jerusalem, and has praised terror attacks on Israelis.  The best example is in 2011, when he gave a speech in Ramallah to celebrate International Day of Martyrs praising Palestinian ‘martyrs’ who commit deadly acts of terror – even inside the green line (Israel’s pre-67 boundaries).

The reasons why even centrist Israeli parties are hesitant to sit in a government with Tibi’s Joint List isn’t because they’re hostile to Arabs. It’s because they’re naturally hostile to any politician who supports attacks against their own citizens – parliamentarians who, while being sworn in as MKs, pledge that they will be “faithful to the State of Israel”.