A BBC News website report headlined “US museum Dead Sea Scroll collection found to be fakes” which was first published on the ‘US & Canada’ page on March 16th now also appears on the ‘Middle East’ page. 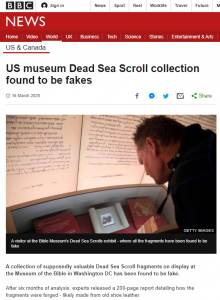 Readers of that article are told that:

“The scrolls are a set of ancient manuscripts of the Hebrew Bible.

The first of the scrolls were found in caves in Qumran on the western shore of the Dead Sea in 1947. They were reportedly first discovered by a young Bedouin shepherd searching for lost sheep. Their discovery is considered to be among the most significant archaeological finds in history.

The majority are held in a collection by the Israeli government.” [emphasis added]

As many readers will know, some of the Dead Sea Scrolls are exhibited at the Shrine of the Book at the Israel Museum in Jerusalem. As that only partly government-funded museum explains:

“The first seven Dead Sea Scrolls were discovered by chance in 1947 by Bedouin of the Ta’amra tribe, in a cave (later given the name “Cave 1”) near Khirbet Qumran on the northwest shore of the Dead Sea. Three of the scrolls were immediately purchased by archaeologist Eliezer Lipa Sukenik on behalf of the Hebrew University; the others were bought by the Metropolitan of the Syrian Orthodox Church in Jerusalem, Mar Athanasius Samuel. In 1948 Samuel smuggled the four scrolls in his possession to the United States; it was only in 1954 that Sukenik’s son, Yigael Yadin, also an archaeologist, was able to return them to Israel, and they were ultimately entrusted to the Shrine of the Book Foundation. They have been on display in the Shrine of the Book at The Israel Museum, Jerusalem, since 1965.

Over the next few years, from 1949 to 1956, additional fragments of some 950 different scrolls were discovered in ten nearby caves, both by Bedouins and by a joint archaeological expedition of the École Biblique et Archéologique Française and the Rockefeller Museum, under the direction of Professor Father Roland de Vaux. The richest yield, from Cave 4, just opposite the site of Qumran, consisted of some 15,000 fragments. The last cave, Cave 11, was discovered in 1956, and the scrolls found there were in a reasonable state of preservation. Since then, only a few small scraps of parchment have been found in the Judean Desert (though not in the close vicinity of Qumran).

Apart from the first seven scrolls, which are entrusted to the Israel Museum, the majority of the fragments found by archaeologists and Bedouin are property of the Israel Antiquities Authority (IAA). Others are in the possession of institutions outside of Israel, such as the Jordan Archaeological Museum in Amman and the Bibliothèque Nationale de France in Paris, or in private hands (the Schøyen Collection, Norway).” [emphasis added]

The Israel Antiquities Authority (founded in 1990) is a partly state funded body which is classified as an independent government authority and which is responsible for implementing the 1978 Antiquities Law which states that:

“When an antiquity is discovered or found in Israel after the coming into force of this Law, it shall within boundaries fixed by the Director become the property of the State.”

So where did the BBC get the idea that “[t]he majority [of the scrolls] are held in a collection by the Israeli government” rather than by the Israel Antiquities Authority?

Perhaps the answer to that question can be found in the Wikipedia entry for the Dead Sea Scrolls which states:

Apparently the BBC journalist who wrote this report does not understand the difference between government and state.

Revealed: BBC’s Kevin Connolly knows how to use Wikipedia

0 replies on “Does the BBC know the difference between government and state?”