The healthcare system in the Gaza Strip has suffered from shortages of medical equipment and supplies for many years because of the rivalry between Hamas and Fatah, which controls the Palestinian Authority. Under the terms of the Oslo Accords, it is the PA which is responsible for healthcare both in the areas under its control and the Gaza Strip.

Throughout that time the BBC has repeatedly steered its audiences towards an inaccurate understanding of the reasons for that chronic shortage of medical supplies by promoting the false notion that Israeli counter-terrorism measures pertaining to the movement of goods and people adversely affect medical services in the territory.

As we noted here in 2014 when Yolande Knell did precisely that, there is not – and never has been – any restriction on the entry of medical supplies to the Gaza Strip with the exception of items classed as dual use equipment which has the potential to be used for terrorism.

The situation is further exacerbated by the fact that medical suppliers are often reluctant to sell supplies to Gaza due to issues of non-payment.

COGAT [the Coordinator of Government Activities in the Territories] works to facilitate the transfer of medication and medical supplies both through the international community and the private sector, however shortages remain.”

Throughout 2019 COGAT coordinated the entry of 800 truckloads of medical supplies to the Gaza Strip.

Nevertheless, the BBC continues to promote the false narrative according to which the sorry state of affairs in the Gaza healthcare system is attributable to Israel – a narrative also promoted by Hamas. 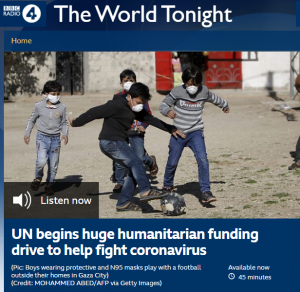 The March 25th edition of the BBC Radio 4 programme ‘The World Tonight’ included an item promoting an appeal put out by the United Nations.

Iqbal: “Life in some of the wealthiest countries in the world has been turned upside down by the Covid 19 pandemic. It’s a virus that doesn’t discriminate and in that respect a leveller. Nevertheless, it will almost certainly adversely affect those who already have so little and to address that, today the United Nations has launched a $2 billion funding drive to help vulnerable countries fight Covid 19. The UN says all of humanity is at risk. In countries already affected by conflict, natural disasters or climate change, the death toll from the virus will be higher.”

Later in that item Iqbal interviewed Mark Lowcock, the UN’s Under-Secretary-General for Humanitarian Affairs and Emergency Relief Coordinator and head of UNOCHA. Before that, however, she sought to illustrate the points made in her introduction. [emphasis in italics in the original, emphasis in bold added]

Iqbal: “The warning comes from [sic] after the confirmation of two cases in the densely populated Gaza region – where a decade-long blockade has devastated the health services – and the first case in Syria reported on Sunday. What are the additional challenges facing crisis zones when trying to tackle the spread of the Coronavirus and are they certain to get the help they need? A short time ago I spoke to Khamis Elessy, a doctor in Gaza.”

Listeners were not informed that in addition to being a doctor, Elessy is also an associate professor at the Hamas-linked Islamic University in Gaza. Several hours after this interview his opening statement concerning two cases of Covid 19 in the Gaza Strip was no longer accurate.

Elessy: “Thanks God that we only have 2 cases confirmed out of 155 cases so we’re assisted. And those two cases were not from Gaza. They come from Pakistan. The healthcare system is barely coping with ordinary cases. Around 40% of essential drugs are lacking inside Gaza. Many of the equipments need spare parts and need repair. Throughout Gaza we have 63 ICU beds fully equipped with ventilators and respirators and the health professionals to serve on these units. But if we think of best scenario for Corona outbreak, we have to think of at least 100 beds so we need to add another 50 beds. They are not available here in Gaza because we don’t have factories or respirators, ventilators and other [unintelligible] of core equipment and we don’t have the medicines like hydroxychloroquine and chloroquine and other things that are needed. So far the two cases which were diagnosed inside Gaza their condition is stable, they’re in good health so far. And we hope that we will not have any other cases and maybe for the first time we have something out of the siege. Maybe this gave us one advantage that we’re not open to the rest of the world and that’s why there is no regular flow of people into Gaza and out of Gaza.”

Of course Iqbal had already told listeners that the counter-terrorism measures employed by Egypt and Israel are responsible for ‘devastating’ the health services in the Gaza Strip and so it was unsurprising to see that audiences received no information whatsoever concerning the real cause of the lack of essential medicines. Equally predictable was Iqbal’s failure to challenge Elessy’s promotion of the false notion of a “siege”.

Turning to the much favoured BBC theme of population density, Iqbal went on:

Iqbal: “I wonder though if you could reflect for us on the possibility of the outbreak affecting Gaza in a bigger way. Do you think, Doctor, that it would be possible to self-isolate in a densely-populated area?”

Elessy: “No, no because unfortunately all families here belong to an extended family class. So the parents living in the same home, their sons, their grandsons. So you see in the same building around 80 or 70 people living in the same building. So self-isolation is difficult, it is impossible and this is actually the scary scenario if, God forbid, we have a huge number of cases that is infected and we need to isolate them, we can’t isolate them.”

Interestingly, in the interview with Mark Lowcock which followed on from this he noted that in relation to weak health systems:

Lowcock: “Gaza in fact is a little bit better than some of the other places we’re talking about like Syria or Yemen or Afghanistan.”

The BBC however chose not to interview a doctor from any of those places but did use the opportunity to once again promote the false and entirely context-free notion (in a programme which will remain available for over a year) that the problems affecting the Gaza Strip’s healthcare services are attributable to Israel’s counter-terrorism measures.

The BBC, the Gaza Strip and medical supplies