As regular readers will be aware, BBC coverage of internal Palestinian affairs is, to say the least, minimal. Stand-alone reports about topics such as social, political and economic issues within Palestinian controlled areas which are not framed within the context of ‘the conflict’ and do not have an Israel-related component are decidedly sparse.

One of those rare reports appeared on the BBC News website’s ‘Middle East’ page on October 7th under the headline ‘Gay Palestinian Ahmad Abu Marhia beheaded in West Bank’. A translated version of the same article was published on the BBC Arabic website on the same day. 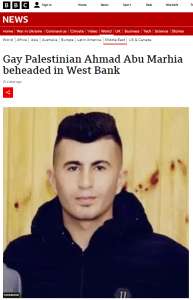 While the uncredited report gives a reasonable account of the story of the murder of a Palestinian who lived under asylum in Israel, readers of its original version also found the following:

“Homosexuality is rejected within the most socially and religiously conservative parts of both Palestinian and Israeli societies.”

CAMERA Arabic submitted a complaint to the BBC, pointing out that the reference to Israel is irrelevant to the story because “the most socially and religiously conservative parts” of Israeli society were not involved in this murder. It was also pointed out that when the BBC reported the murder of Israeli teen Shira Banki at the 2015 Jerusalem pride parade, it did not include any irrelevant references to anti-LGBT groups in Palestinian society.

Notably, BBC Arabic itself also reported in 2019 the findings of an Arab Barometer opinion poll, according to which only 5% of West Bank Palestinians accept homosexuality, the lowest rate out of all Arab countries and territories surveyed. In comparison, a Pew opinion poll from 2020 found that homosexuality enjoys acceptance among 47% of Israelis, more than 9 times that ratio.

Some of the commentators in BBC Arabic’s Facebook and Twitter channels also supported the murder of Abu Marhia.

The response received from the BBC reads as follows:

“Thank you for getting in touch about our article Gay Palestinian Ahmad Abu Marhia beheaded in West Bank.

There was no implication that Israel or Israelis were responsible in Mr Abu Marhia’s death and the line in the article illustrates a wider regional context, which we considered relevant given the story also refers to how:

Some 90 Palestinians who identify as LGBT currently live as asylum seekers in Israel, the newspaper said, after suffering discrimination in their home communities

However after considering your point we have amended the line to now say:

“Homosexuality is rejected within the most socially and religiously conservative parts of both Palestinian and Israeli societies but gay people in Israel can freely lead their lives.”

In order to give readers a greater sense of why Mr Abu Marhia and others are seeking asylum in Israel.”

The Arabic language version of the report was amended on October 13th.