On May 13th the BBC produced two items about a short visit to Israel by the US Secretary of State which are noteworthy because of their preemptive framing of what the BBC apparently sees as an upcoming news topic.

On the BBC News website’s live ‘Coronavirus page’ an item appeared under the heading “Pompeo flies to Israel for talks despite pandemic”. Readers were told that: 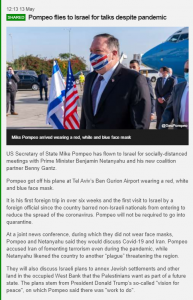 “At a joint news conference, during which they did not wear face masks, Pompeo and Netanyahu said they would discuss Covid-19 and Iran. Pompeo accused Iran of fomenting terrorism even during the pandemic, while Netanyahu likened the country to another “plague” threatening the region.

They will also discuss Israeli plans to annex Jewish settlements and other land in the occupied West Bank that the Palestinians want as part of a future state. The plans stem from President Donald Trump’s so-called “vision for peace”, on which Pompeo said there was “work to do”.”

The same day’s afternoon edition of the BBC World Service radio programme ‘Newshour’ also included a report about the visit (from 09:18 here) by Tom Bateman.

As the Jerusalem Post and others reported ahead of the meeting:

“The Iranian threat is expected to be at the top of the agenda, as well American and Israeli efforts to develop a vaccine for coronavirus, and Israel’s implementation of the Trump peace plan, including settlement annexation. […]

Pomeo said he, Netanyahu and Gantz will address “Iranian threats, and how we will continue working together to deter them and prevent them from attaining nuclear weapons.””

Tom Bateman’s report, however, failed to provide BBC audiences around the world with any meaningful information concerning the issue at the top of the agenda. Instead it unequivocally focused audience attentions on another presumed topic of the meeting right from the introduction by presenter James Menendez.

Menendez: “Now the US Secretary of State Mike Pompeo is on his way home after a brief visit to Israel: his first foreign trip in more than six weeks. Coronavirus but also Iran and Prime Minister Benjamin Netanyahu’s proposal to annex parts of the occupied West Bank were all said to be on the agenda. Our Middle East correspondent Tom Bateman is in Jerusalem – why this visit now?”

Bateman: “Well the official reasons that were given were that he wanted to talk about responses to the Coronavirus crisis. They mentioned things like the way that American and Israeli companies can work together and share technology, for example, and medical approaches. But also, critically, the response – as the US sees it – to what it calls the malign influence of Iran in the region. Now that’s something of course they share an approach with on the Israelis and they wanted to talk about this. But I think once the doors closed, the other issue will be about the Israeli proposal to annex parts of the Israeli-occupied West Bank. Now the point of the timing there is that tomorrow there is due to be a formal swearing-in of the new Israeli coalition and enshrined in the coalition partnership is that Mr Netanyahu the prime minister wants to introduce either to the cabinet or to the Israeli parliament those annexation proposals – or applying sovereignty as the Israelis put it – from July the 1st. So Mr Pompeo said that he wanted to hear what the Israeli thinking was on that…ahm…and I mean given the amount of hassle it’s involved for him to come here at this point – they’ve had to put a health bubble around him effectively and they say that anyone who goes within 2 meters of him has to be screened for Coronavirus – it’s pretty clear that putting some importance on having this meeting now.”

Menendez: “And just remind us; how controversial would that annexation plan be?”

Bateman: “Well it stems from President Trump’s vision for peace, so-called, or the Peace to Prosperity plan as the Americans call it – better known I think locally as the deal of the century for President Trump – which would involve a Palestinian state as the Americans envisage it on about 70% of the land of the West Bank, Israel being able to annex the settlements and parts of the Jordan Valley and some land swaps as well. Now the point about that was always that the Americans had said, particularly the US Ambassador to Israel, David Friedman had said, he said initially Israel was…didn’t have to wait to do that annexation. Now the tone from the Americans since January has changed, or it feels slightly that it’s shifted on this although they deny there’s any change of approach. They’ve talked more recently much more…put more emphasis on the need for the Israelis to agree to negotiate with the Palestinians. The problem there is that the Palestinians outright reject this plan; they’ll have nothing to do with it. They say they weren’t even approached by the Americans ahead of this visit either and they’ve boycotted relations for some time now. As for the rest of the world, well much of the rest of the world rejects it. It points out that annexation would be in breach of international law so the stakes are pretty high diplomatically amid all this but Mr Netanyahu, with that government formation due to take place, has said in the past that he wants to press ahead with it.”

After Pompeo’s visit the Times of Israel reported that:

“US Secretary of State Mike Pompeo did not make a lightning trip to Israel just to speak about West Bank annexation, an unnamed senior US official said Wednesday, following the top American envoy’s whirlwind visit to Israel amid the coronavirus pandemic.

Two US State Department officials, speaking anonymously during a press briefing, said the issue of annexation was not “the top line in Pompeo’s talks.”

“We should dispel the notion that we flew halfway around the world to talk about annexation,” one official said when asked about the issue.”

“…enshrined in the coalition partnership is that Mr Netanyahu the prime minister wants to introduce either to the cabinet or to the Israeli parliament those annexation proposals – or applying sovereignty as the Israelis put it – from July the 1st.”

However, as Anshel Pfeffer pointed out at the Jewish Chronicle:

“The coalition agreement between Likud and Blue and White stipulates that Mr Netanyahu can bring the issue of annexation to the cabinet and Knesset from July 1. But it does not say he has to.

“Bibi used annexation for electoral purposes,” says one cabinet minister. “I’m not so sure he intends to make it happen now that he’s finally won. Perhaps he’ll make do with a symbolic annexation of just a few settlements or part of the Jordan Valley. I don’t think he wants to go ahead with it, though.””

“Ahead of the swearing-in ceremony, Likud and Blue and White on Wednesday evening released the policy principles of the new government, as instructed by the High Court of Justice. […]

The principles did not specifically mention the annexation of parts of the West Bank, a step that under the coalition deal between Likud and Blue and White can be set in motion as early as July.”

In other words the issue of application of Israeli law to parts of Area C is by no means as cut and dried as the framing in Bateman’s report (and others which will be discussed at a later date) tried to make out.