The May 28th edition of BBC Radio 4’s ‘From Our Own Correspondent’ (a programme billed as providing “insight, wit and analysis”) was titled “Israel’s prime minister in the dock”. 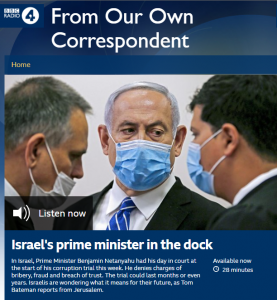 “In Israel, Prime Minister Benjamin Netanyahu had his day in court at the start of his corruption trial this week. He denies charges of bribery, fraud and breach of trust. The trial could last months or even years. Israelis are wondering what it means for their future, as Tom Bateman reports from Jerusalem.”

The introduction to that lead item given by presenter Kate Adie (from 00:35 here) included the following: [emphasis in italics in the original, emphasis in bold added]

Adie: “First to a prime minister in trouble in Israel. Benjamin Netanyahu has had his day in court this week at the start of his corruption trial, charged with bribery, fraud and breach of trust. He had tried to get the whole process put off but was eventually compelled by judges to appear in a process which might last months or even years.”

What Adie meant by “the whole process” is not clear to listeners. If she was referring to what she described in her previous sentence as “his day in court this week”, the statement is not accurate. Netanyahu did not request that the opening session be “put off” – i.e. postponed. He did ask not to be present in person and that request was rejected by the judges two days after it was filed rather than “eventually”.

Following Netanyahu’s withdrawal of his request for parliamentary immunity in late January, the indictment against him was filed by the Attorney General.  In February the judges were selected and the date of the opening session was set for March 17th. A request by Netanyahu’s attorneys to delay the opening of the trial by 45 days was rejected by the court on March 10th. Five days later the date of the opening session was postponed by the judges until May 24th because of the Coronavirus pandemic.

In other words, if by “the whole process” Adie meant the entire trial, the second half of her sentence makes no sense since the request for a 45-day postponement was swiftly rejected.

In the report presented by Tom Bateman listeners were told that at an address he gave prior to the start of the first court session Netanyahu “had the security minister standing behind him along with a good chunk of the government of Israel”. The politicians who arrived at the Jerusalem District Court were in fact all members of his Likud party.

“…galvanising his base against threats, real or otherwise, seems to be where he is most comfortable.”

Bateman did not however inform listeners that there are others who also want “the whole trial televised”. A request to broadcast the opening session of the trial – presented by media outlets – was rejected by the court.