On June 13th the BBC News website published a report on its ‘Europe’ page which was headlined “French police clash with anti-racism activists in Paris”.

Like that headline, the body of the report also informed readers that the people demonstrating in Paris on that day were protesting racism. 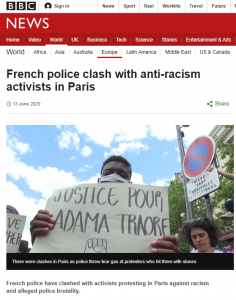 “French police have clashed with activists protesting in Paris against racism and alleged police brutality. […]

The rally is part is a worldwide movement inspired by America’s Black Lives Matter protests.

It was organised under the banner “Justice for Adama”, after Adama Traoré, a young black man who died in French police custody in 2016.

France is one many countries that has seen a wave of anti-racism marches modelled on the latest Black Lives Matter protests in the US.”

However the BBC refrained from telling its audiences that some of the people attending that demonstration in Paris shouted a racist slogan.

“Police authorities in France announced they will report anti-Semitic remarks heard during a demonstration against racism and police violence on Saturday in Paris during which ‘’Dirty Jews’’ was shouted by protesters.

The announcement came after the posting of a video posted by weekly Valeurs Actuelles showing “dirty Jews” shouted by the crowd gathered on the Place de la République in central Paris, where more than 15,000 people were gathered. Riot police fired tear gas to disperse the protest.”

The police announcement can be seen here and the video here.

In addition, an i24 News journalist who was at the demonstration reported seeing Palestinian flags, people in t-shirts with the slogan ‘justice in Palestine’ and a banner saying “Israel, laboratory of police violence”. She raised the pertinent question of what any of that had to do with ‘anti-racism’ and ‘alleged police brutality’ in France.

This is not the first time that BBC audiences have seen antisemitism and anti-Israel rhetoric whitewashed from the corporation’s account of a protest in Europe.

The BBC describes its online content as ‘historical record’ which serves the public interest. Clearly the public interest is not served if that record is inaccurate, biased or does not tell the whole story because inconvenient details which do not line up with the corporation’s chosen narrative are omitted from its reporting.