Our review of coverage of the potential application of Israeli civilian law to specific parts of Area C on two BBC radio stations and the BBC News website showed that a number of specific talking points appeared repeatedly in that content:

A post-script to that extensive coverage was found in the ‘Hardtalk’ programme aired on the BBC News Channel on July 9th (available in the UK here) and on BBC World Service radio on July 10th (available here). 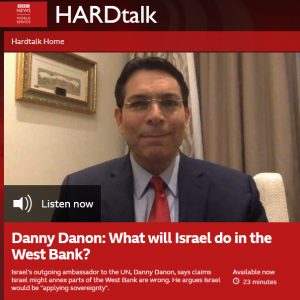 The synopsis to that programme once again reflected the BBC’s need to ‘explain’ why an event that it had spent a month and a half telling audiences – and itself – was going to happen on July 1st did not take place.

“Just days ago, the Israeli-Palestinian conflict appeared to be on the brink of an historic shift. Israeli prime minister Benjamin Netanyahu seemed intent on annexing a major chunk of the occupied West Bank. Palestinians and many beyond the region warned of dire consequences. But so far it hasn’t happened. HARDtalk’s Stephen Sackur speaks to the outgoing Israeli ambassador to the United Nations, Danny Danon. Has Prime Minister Netanyahu blinked in the face of international condemnation?”

As is usually the case when he interviews Israeli officials, presenter Stephen Sackur promoted his pre-prepared talking points in a series of questions often longer than the answers he repeatedly interrupted and dismissed.

Using standard BBC partial terminology, Sackur began by promoting the inaccurate claim that ‘annexation’ was supposed to have happened at the beginning of July. [emphasis in italics in the original, emphasis in bold added]

Sackur: “In recent days Ambassador Danon has had to withstand a wave of international diplomatic condemnation of Mr Netanyahu’s declared intention to annex a major chunk of territory in the occupied West Bank, essentially declaring 30% of the disputed land and almost all of the Jewish settlements to be sovereign Israeli territory. But this historic and hugely controversial move hasn’t happened – yet. It’s not clear why or indeed whether it is imminent. What is clear is the depth of Palestinian fury and the scale of international concern. Could it be that Mr Netanyahu has had second thoughts?”

It is of course amply clear “why” nothing happened on July 1st: the very most that was going to happen on that date was that – in accordance with the coalition agreement – the topic of application of Israeli civilian law to parts of Area C could have been brought to the cabinet for discussion as the first part of a process which includes further discussion in the Foreign Affairs and Defence Committee and in the Knesset. However Sackur did not let that fact get in the way of promotion of his agenda.

Sackur: “Let’s begin with what appears to be a real sense of confusion at the top of your government in Israel. The world was expecting a formal declaration from the Netanyahu government of annexation of territory in the occupied West Bank. They were expecting it days ago and it never happened – why?”

Taking issue with Sackur’s terminology, Danon pointed out that July 1st was the date on which, according to the coalition agreement, discussion could begin and that “there was no decision made to announce anything on July 1st.”

Sackur however could not let go of the chimera he and his colleagues had created.

Sackur: “Well, there are many Israelis who do appear to be confused. A poll just released by the Israel Democracy Organisation [sic – actually Israel Democracy Institute) shows 55% of Israelis no longer believe that annexation is going to happen and it’s clear that the so-called alternate prime minister Benny Gantz from the Blue & White party is…ah…saying that he doesn’t believe it will or should happen. So there is confusion.”

The question in that quoted June 2020 poll actually asked about “the chances, in your opinion, that Israel will indeed apply its sovereignty to parts of the West Bank/Judea and Samaria in the coming year” and Sackur’s claim regarding the position taken by Mr Gantz is – at best – simplistic.

After Danny Danon had again taken issue with Sackur’s ‘annexation’ terminology and although he pointed out that any future decision on the issue will be taken by the democratically elected government of Israel, Sackur continued to flog his talking point.

Sackur: “Mr Netanyahu’s message throughout the election was that if he became prime minister he would deliver on this promise to –  and I’m gonna use the word one more time and we can discuss in a moment whether it’s legitimate – but he promised, as far as the international community is concerned, to annex 30% of the territory of the West Bank and pretty much all of the Jewish settlements. The bottom line is it is no longer clear that that is going to happen. He has blinked.”

It was of course never clear that that particular campaign slogan was definitely “going to happen” and it is highly doubtful that Stephen Sackur really believes that election promises made in any country always come to fruition. Danon pointed out that the Israeli prime minister “would need to gather a majority to pass the resolution in the government” and noted that any such step would be coordinated with the US administration. Sackur then moved on to the topic of terminology, using it to promote the talking point of a consensus ‘world view’.

Sackur: “You say you reject the word annexation because you cannot annex what is yours. Do you believe [sic] in international law, Ambassador?”

Sackur: “With the greatest of respect, Ambassador, this notion that the land, the occupied West Bank is yours, it is not in any accordance with international law as defined by independent jurists right across the world and you know it.”

After Danon had mentioned the Balfour Declaration, the 1920 San Remo conference and the UN’s adoption of the outcome of San Remo, Sackur interrupted him:

Sackur: “Frankly Ambassador, there…there…there isn’t an independent legal mind in the world who thinks that would stand up in any court of law but I understand your position is not going to change.”

In other words, BBC audiences did not get to hear that the area concerned was part of the Mandate which charged the Mandatory with creating conditions “as will secure the establishment of the Jewish national home” or that Jordan illegally invaded and occupied that territory in 1948 before Sackur continued with an aggressive and downright bizarre line of questioning:

Sackur: “I’d like to ask you if you actually feel that you’ve represented Mr Netanyahu and the Likud and the ideological settler movement because it seems to me that’s who you’ve been representing. You haven’t been representing the Israeli nation as a whole because you know better than I do – and I’m going to quote you three different Israeli…previous Israeli prime ministers, two IDF chiefs of staff who happen to be prime ministers, justice and foreign ministers, who all have concluded that this – and they use the word, they use the word annexation – is entirely against Israel’s interest and wrong.”

Audiences never did learn who two of the three people ostensibly quoted by Sackur are but they did get to hear another BBC talking point: the ‘apartheid’ smear.

Sackur: “…you have three different Israeli former prime ministers who are saying this is entirely wrong. At least two of them to my knowledge ‘cos they’ve done it to me personally, use the word apartheid about what Israel would be if it proceeded with this annexation. Tzipi Livni…recently said annexation – her word – would fundamentally jeopardise the nature of Israel as a Jewish democratic state. Do none of these people and their words give you cause for thought?”

In the heat of that rant Sackur apparently forgot that Tzipi Livni is not a former prime minister of Israel.

Danon replied by pointing out that the Palestinians refused to sign agreements with Livni as well as with Rabin, Barak and Olmert so Sackur swiftly changed the subject.

Sackur: “You seem to have painted out that bit of the history where Binyamin Netanyahu for the last few years has made it plain that he absolutely rejects the notion of a two-state solution which was the very foundation of the Oslo peace process. You know that as well as I do.”

The Oslo Accords did not call for a Palestinian state and Sackur’s claim that the concept of the two-state solution was “the very foundation” of those agreements is (as recently acknowledged by  the Daily Mail) inaccurate and misleading.

Sackur proceeded to interrupt Danon’s one-liner response stating that Netanyahu had said he is willing to negotiate everything.

Sackur: “No, no, no. If I may say so he made it very clear that he rejected and he still rejects any idea of a meaningful two-state solution.”

As he so often does in interviews with Israeli officials, Sackur continued by invoking a list of supposed support for his talking points in a series of ‘questions’. The US Democratic party contender Joe Biden was followed by “American Jews”, Boris Johnson, “European nations”, the UN secretary general, the Arab League, Jordan and Egypt.

Sackur: “Ambassador, patently you are not taking any of those voices and opinions into consideration. If you even think annexation should be on the table you’re patently not listening to any of them. […] You don’t listen to any of these voices.”

When Danon pointed out that all those voices would be advised to actually wait until a decision had been made before criticising it, Sackur’s scolding continued:

Sackur: “Do you not care about the looming isolation that Israel is gonna face if Mr Netanyahu makes good on his promises? I mean you’re a diplomat: do you not care at all? Do you not see that there is a grave danger here for Israel?”

Danon’s reply that “threats don’t work on our decision makers” was met with the following response:

Sackur: “Is that…is that simply because Israel is currently in the hands of extremists? Is that why these…eh…words from the international community have no real import in Jerusalem? Because frankly the government right now is on an extreme course.”

After another monologue-cum-question predicting “economic isolation” because of the Covid-19 pandemic combined with “sanctions being imposed in Europe” should Israel go ahead with the proposed application of civilian law to parts of Area C, Sackur turned to another recently promoted BBC talking point.

Sackur: “…now we see more instability; for example a bomb going off in the Natanz nuclear site inside Iran just the other day, sources suggesting it was Israel that did it. Is that true?”

Despite Danon responding “You don’t expect me to answer that question”, Sackur persisted.

The interview closed with a ‘question’ from Sackur concerning ‘waning’ American influence in the world and the assertion that Israel has been “too complacent” in that regard.

Obviously BBC audiences learned very little about the Israeli view of the purported topic of this interview, not least because Stephen Sackur hogged much of the airtime with his polemical ‘questions’ designed to promote the pre-determined talking points intended to be taken away by listeners and viewers.

Clearly that tactic – along with the scolding and repeated interruption of an interviewee – is not conducive to the production of the “duly accurate and impartial news, current affairs and factual programming to build people’s understanding […] of the wider world” which BBC audiences are supposedly entitled to expect.

BBC RADIO BACKTRACKS ON NON-STARTER STORY IT PROMOTED FOR WEEKS