Between July 10th and July 12th the BBC News website published three reports relating to the Turkish president’s announcement concerning the conversion of the Hagia Sofia museum into a mosque. 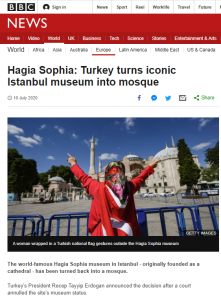 All three of those reports quote a statement made by Erdogan.

“Defending the decision, President Erdogan stressed that the country had exercised its sovereign right in converting it back to a mosque.

He told a press conference the first Muslim prayers would be held inside the building on 24 July.

“Like all our mosques, the doors of Hagia Sophia will be wide open to locals and foreigners, Muslims and non-Muslims,” he added.”

“He defended his decision on Friday by stressing that the country had exercised its sovereign right in converting the building back to a mosque. The first Muslim prayers would be held on 24 July.

“Like all our mosques, the doors of Hagia Sophia will be wide open to locals and foreigners, Muslims and non-Muslims,” he said.”

“Defending the decision, President Erdogan stressed that the country had exercised its sovereign right, and he added that the building would remain open to all Muslims, non-Muslims and foreign visitors.”

However BBC audiences were not informed that, in addition to statements issued in Turkish and English, the Turkish president also put out an Arabic version which was reported by the Jerusalem Post as follows:

The speech, which was in Turkish, was translated slightly differently to Arabic and English, apparently as a way to hide part of Ankara’s full views on how it has linked Hagia Sophia to a wider agenda.

In Arabic the speech says that turning Hagia Sophia into a mosque is part of the “return of freedom to al-Aqsa,” essentially meaning Israel should be ejected from controlling Jerusalem’s Old City where al-Aqsa is located.”

Obviously the BBC did not find those remarks newsworthy. While it did report objections to the change of designation of Hagia Sofia from museum to mosque from UNESCO, several Christian religious bodies and others, audiences were not provided with any information concerning Erdogan’s statement relating to ‘liberation’ of al Aqsa Mosque or its subsequent condemnation.