On August 17th the BBC News website published an ‘In Pictures’ article on its ‘Middle East’ page titled ‘Israel battles huge wildfire near Jerusalem’ which is prominently tagged ‘Climate change’. 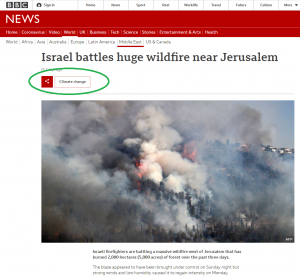 The article closes as follows:

“Fire and Rescue Services Commissioner Dedi Simchi has said the fire was caused by humans, but investigators do not know yet if it was arson or negligence.”

Local media have since reported that arson is increasingly viewed as the more likely possibility.

“Fire investigators are seeing growing evidence that the massive fire in the Jerusalem Hills this week was caused by arson, according to a report on Kan news.

The network said that investigators had found forensic evidence on the ground that may be tied to the cause of the blaze.

Meanwhile the Shin Bet security agency is assisting police in its investigation into the fire, suggesting there is suspicion of a potential nationalistic motive. […]

On Wednesday, Channel 13 news reported that officials believed the fire was started by arson, since it was ignited in two different places near Beit Meir, in an area that doesn’t see many hikers and where no objects have been found that could have started the fire by accident.”

Nevertheless, the BBC’s article continues to promote the topic of climate change using a link to a paywalled article from Ha’aretz that most readers would not be able to access.

“Its rapid spread has been aided by the dryness of the vegetation in the Jerusalem Hills after a relatively dry winter and a hot summer.

“The climate crisis will make such events more frequent and powerful, and Israel is particularly sensitive to drought and warming,” Environmental Protection Minister Tamar Zandberg warned during a visit to a fire service command centre, according to the Times of Israel.

The world has already warmed by about 1.2C since the industrial era began and temperatures will keep rising unless governments around the world make steep cuts to emissions.”

The Israel Meteorological Service had the following to say:

“The fire this week attracted attention, among other things, due to the amounts of smoke and clouds that developed and gave Jerusalem a slightly surreal look, but other fires have recently broke out in the Galilee and another area in the Jerusalem mountains and left great damage to the landscape in addition to damage to animals, plants and property. Common to all these events is that the meteorological factor was not the main cause of their breaking out, but since the fire began, weather conditions have, to some extent, helped the spread of the fire.” [emphasis added]

Kan 11’s weather forecaster Sharon Wexler – by no stretch of the imagination a climate change ‘denier’ – wrote the following:

“…it is not possible to attribute the serious fire in the Jerusalem mountains that carried on for 52 hours to the climate crisis. […] the past two weeks were completely normal for the season. 30 degrees in Jerusalem is an average temperature for the season. Even the humidity in the Jerusalem mountains was not low in the past two weeks. Those who live in the area know that in the summer the wind always gets a little stronger in the afternoon. […] There was no heatwave, the humidity was not low, it was an entirely standard summer.”

As the authorities continue their investigations into the causes of the blazes, one thing is already clear: this report is a prime example of how agenda motivated journalism hinders audience understanding of issues and events.

BBC COVERAGE OF FIRES IN ISRAEL MISLEADS ON CARMEL CASUALTIES