Credited to Yolande Knell of the BBC Jerusalem bureau and Rushdi Abu Alouf of the BBC’s Gaza office, the article opens: 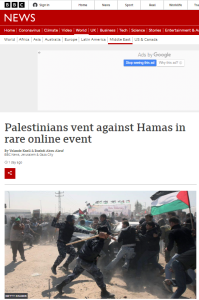 “Hundreds of Palestinian activists have been taking part in a rare online event strongly criticising Hamas governance of the Gaza Strip.

They Kidnapped Gaza began as an audio discussion on Twitter on Thursday. […]

The three-hour long, live conversation was organised by five Gazans who left the Palestinian territory after joining the We Want to Live protests which were violently suppressed in March 2019.”

That link leads to a report by Yolande Knell from March 2019 which was discussed here at the time, along with additional reporting on the same topic.

WHAT IS MISSING FROM BBC NEWS BULLETINS ON GAZA PROTESTS?

As was the case in those and other previous reports, this latest one too lacks essential context.

“Living conditions in Gaza are dire. There is a severe lack of water, poor sewage treatment and long daily power cuts. Some 67% of the youth workforce are unemployed – with the highest figures among graduates.”

Knell and Abu Alouf fail to explain the mismanagement and inter-factional rifts which have brought about a chronic utilities crisis in the Gaza Strip.

Once again, no effort is made to inform readers that a rise in terrorism against Israeli civilians following Hamas’ coup in the Gaza Strip – including over 3,000 attacks using rockets and mortars in the first year alone – prompted counter-terrorism measures that include what Knell and Abu Alouf describe as a “tight blockade”.

Following its takeover, Israel and Egypt imposed a tight blockade against the militants which has squeezed the Palestinian territory. Internationally, Hamas is widely seen as a terrorist group.”

“A Hamas spokesman did not respond directly when the BBC asked for his reaction to the They Kidnapped Gaza virtual event and hashtag still being used on Twitter.”

Reporting on the same story, the Jerusalem Post noted that:

“Hamas supporters claimed that the Palestinian Authority and Israel were behind the new campaign.”

Presumably in the interest of perceived impartiality,  Knell and Abu Alouf found it appropriate to showcase in their article statements made on social media by both those opposed to Hamas and those supporting it:

“Supporters of Hamas have also been quick to attack its critics.

“They Kidnapped Gaza and made it a centre of resistance and challenge to the largest power in the world,” a loyalist, Wael Abu Omar, wrote in response on Twitter.

“They kidnapped Gaza and it became a hotbed for striking Tel Aviv, Haifa and occupied Jerusalem with rockets. They kidnapped it and Gaza became the defending champion of Jerusalem and Sheikh Jarrah [a politically contentious district in Jerusalem linked to the outbreak of the May war].””

That bracketed ‘context’ inserted by the BBC journalists once again promotes the false Hamas narrative concerning Operation Guardian of the Walls which the corporation adopted in May 2021 and which it has continued to promote ever since.

As regular readers know, BBC reporting on internal Palestinian affairs can at best be described as minimal. It is therefore all the more significant that when it does get round to producing content relating to social, political and economic issues in Palestinian society, background essential for their understanding is not provided while the one sentence of context that the reporters did choose to insert into their article amplifies the chosen narrative of a terrorist organisation.

BBC’S BATEMAN GETS GAZA WATER SHORTAGE RIGHT FOR A CHANGE