An op-ed  (pay wall) in the Independent by their former Jerusalem correspondent Donald Macintyre (“No, the Israel-UAE deal does not mean Europe can turn its back on the Palestinians”, Aug. 19) is the latest example of a media outlet promoting the Palestinian dissent on the otherwise widely applauded UAE-Israel peace accord.

In his piece, Macintyre relies on the analysis of veteran Palestinian spokesperson and negotiator Hanan Ashrawi:

[Ashrawi’s] message was clear about the deal in which the UAE has promised Israel the recognition which, like all other Arab states apart from Jordan and Egypt, it had withheld, pending a just peace with the Palestinians.She was clear that it is a betrayal of her people. And Benjamin Netanyahu’s “suspension” of the threat to formally annex large parts of the West Bank doesn’t alter that.

[Palestinians including Ashrawi] believe they made a huge historic compromise by agreeing to a Palestinian state in the West Bank, Gaza and East Jerusalem, or 22 per cent of historic Palestine – which is also the stated policy of the EU – and Britain.

It’s true that Palestinian leadership has been deficient. Mahmoud Abbas, the Palestinian president, might have engaged with the Trump plan (which would lop off about a third of that 22 per cent) by explaining in more detail to the world how far it fell below the minimum needed for a sustainable state.

By uncritically citing Ashrawi’s claim that a Palestinian state in even 100% the West Bank, Gaza and east Jerusalem would be a big compromise, as it represents a measly 22 per cent of “historic Palestine”, Macintyre is egregiously misleading readers.

There was never, at any point in history, a sovereign Palestinian state, and in fact Palestinian national identity (as a unique nationalist movement separate from Arab or tribal identities) is only a 20th century phenomenon.

The implicit suggestion of the “Palestinian compromise” narrative, that a Palestinian state in the West Bank, Gaza and east Jerusalem is only 22% of ‘their historical homeland’, falsely suggests that the entire land, from ‘the river to the sea’, is and always was Palestinian, and that any Jewish state on this land is a “compromise” of their rights to all of it..

The truth is, however, that Israel has conceded most of their “historic land” as promised to them by the 1922 Mandate for Palestine – arguably the earliest modern legal codification of an area known as “Palestine”.

As this map, by Shany Mor at The Tower, shows, Palestinian political control of the land since 1946 (or, since the Balfour Declaration in 1917, for that matter) was zero, but now, because of Israeli concessions and territorial withdrawal, encompasses all of Gaza and major population centers in the West Bank. 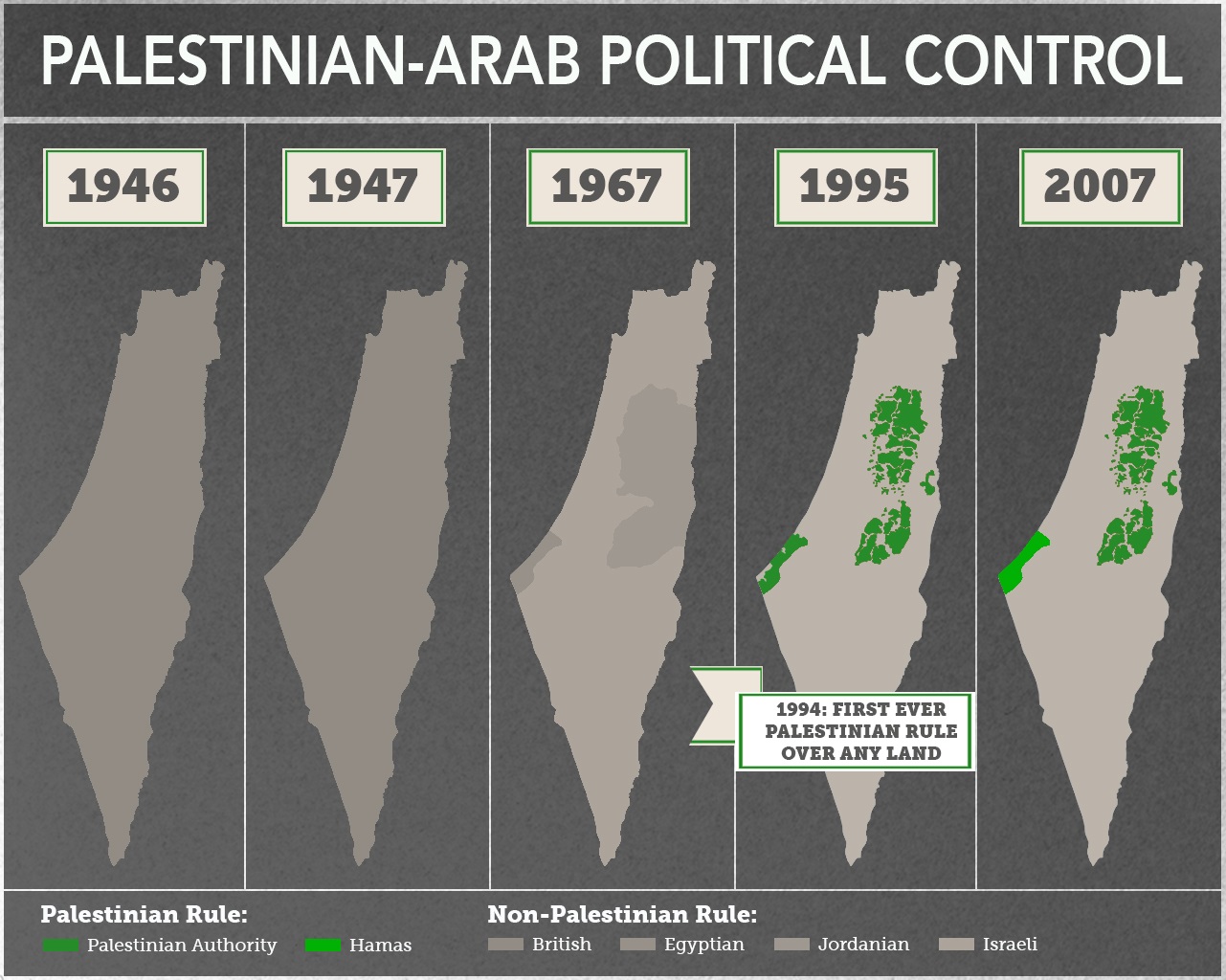 Moreover, in addition to 1947 UN Partition Plan rejected by Arab leaders, Israeli peace offers in 2000, 2008, and 2020 (the Trump peace plan), which Palestinian leaders similarly rejected, would have increased the amount of territory – and the degree of control they have over it – beyond what’s illustrated in the final map.

Palestinians can’t justifiably be seen as “compromising” for relinquishing their claim to all of “historic Palestine”, and PA leaders such as Ashrawi clearly need reminding that – regardless of the objective merits of their current territorial demands – they didn’t lose 78% of their land for the simple reason that you can’t lose land you never had control of in the first place.