(All translations, emphases and in-bracket remarks are by CAMERA Arabic)

In two consecutive articles, published on September 16th and 17th, Independent Arabia’s West Bank correspondent Khalil Mousa misrepresented both Israeli and US positions towards negotiations with the Palestinians and the future of the Palestinian Authority.

Although he was made aware of at least one of the falsehoods in the first article via CAMERA Arabic’s twitter account (he liked our tweet on the matter only to unlike it later – see screenshot), so far Mousa and his editors failed to correct even that specific detail despite our subsequent request.

In his September 16th article, entitled “Palestinians rely on a Biden victory in the American elections to improve their condition”, Mousa mentioned that US president Donald Trump: “moved the American embassy to Jerusalem, and recognized it as the ‘united capital of Israel’”.

In fact, as we have shown before, the US never recognized a united Jerusalem as Israel’s capital, as it considers the municipal borders of Jerusalem – as well as its permanent status – a matter dependent on the future results of Israeli-Palestinian negotiations. This was made clear in a statement issued by the State Department on its official website.

As mentioned, Mousa liked our tweet that informed him of the falsehood, only to unlike it later on once we posted a request to correct it: 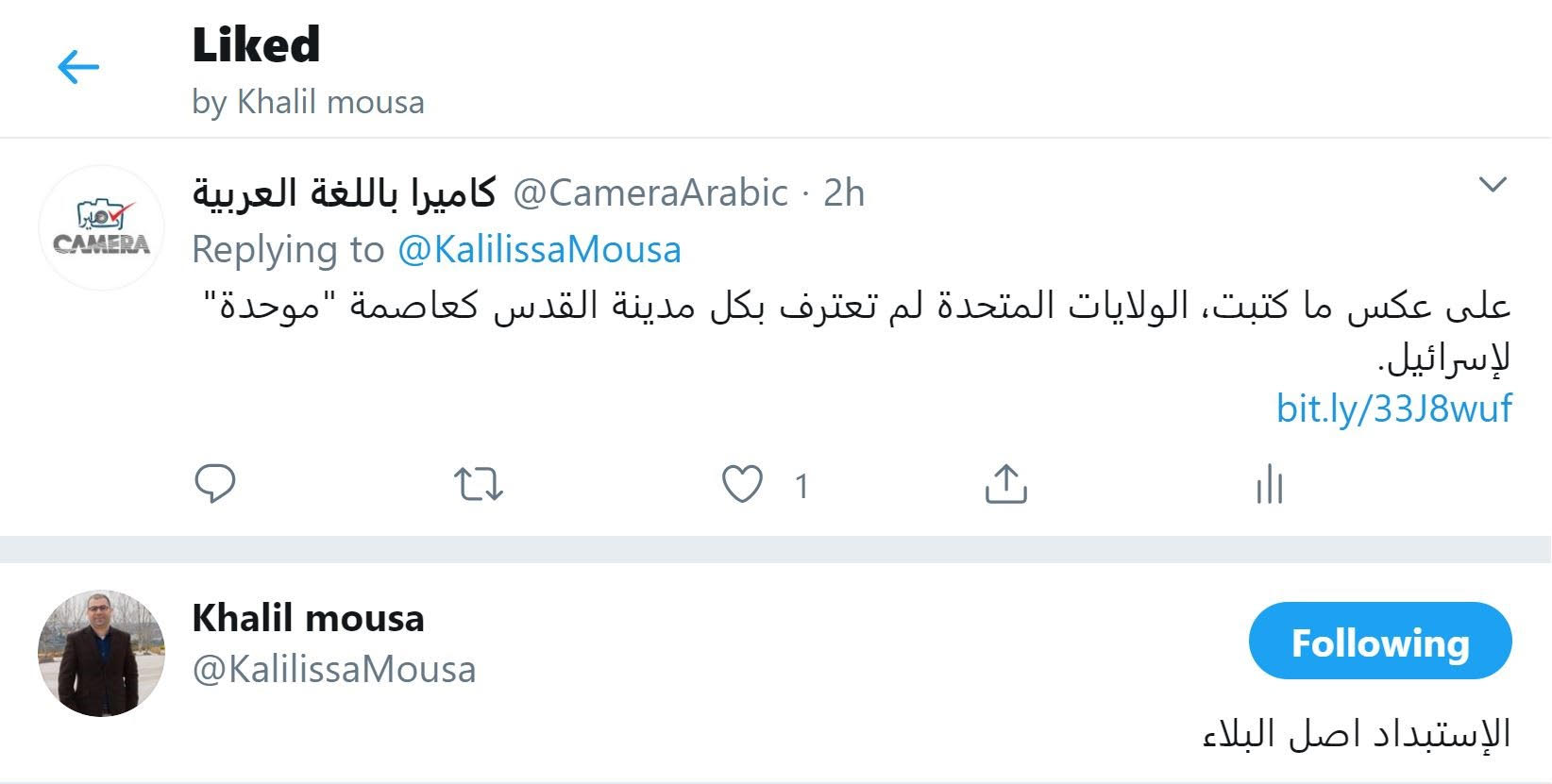 Our Arabic tweet reads: “Contrary to what you wrote, the United States did not recognize the entire city of Jerusalem as Israel’s ‘united’ capital.”

Further on in the September 16th article, Mousa continued to list the reasons that “Palestinian-American relations deteriorated during Trump’s term”:

“The Palestinians also considered Trump’s peace plan, which he launched in the beginning of last year, as [a plan] that adopts the positions of the Israeli right, deprives them of establishing a state on the 1967 borders with Jerusalem as its capital and prevents the return of the Palestinian refugees to the homes from which they were displaced.”

This phrasing asserts that one of the problems Palestinians see in Trump’s peace plan is the fact it “prevents the return” of what Mousa calls “the Palestinian refugees”, into what he visualizes as “the homes from which they were displaced”. The correspondent clarifies, for example here, that his concept of “Palestinian refugees” overlaps that of UNRWA, i.e. roughly six millions Palestinians recognized as such by this highly controversial, if not straight-out dubious, UN agency.

However, a “return” of so many individuals to “their” respective alleged homes was never a part of any US peace plan in the history of the conflict, since it would deny the Jews in Israel their rights of self-determination and peaceful lives in their ancestral homeland.  Is that really a reason for the poor condition of US-Palestinian relations in the Trump era? Of course not, and Mousa should know this; after all, in March 2019 he himself admitted that none of the previous attempts to solve the conflict (what he calls “the Two-state solution”) ever aimed to introduce mass immigration of Palestinians into internationally-recognized Israel:

“[…] History surpassed the two-state solution. [It is] unrealistic, and fundamentally it does not end the conflict because it avoids the core of the Cause [al-Qadiyya, i.e. the Palestinian Cause] which are the refugees […]”

Notably, the same twitter thread indicates that Mousa equates the real end of the conflict with “ending the Zionist project”.

This solution, he writes there, shall be fulfilled via retrieving what he views as “our rights”, namely implementing the so-called “Right of Return” within the framework of a one-state solution along the former borders of Mandatory Palestine. Therefore, Mousa openly supports the concept of a Greater Palestine (this support is also evident from at least one more of his articles).

Back to the September 16th quote regarding the Palestinian demand to “return”, Mousa also implies there that the American position towards this demand is somehow associated only with the “Israeli right”. If that is the case, one might wonder what counts as left of center for him? Luckily, that very same article provides the answer, labeling the J-Street lobby group as “left”.

Alas, even lefty J-street seeks to “prevent the return of the Palestinian refugees to the homes from which they were displaced”, hence opposing Mousa’s beautiful vision of millions immigrating into miraculously rebuilt homes in what is today Israel (as it has been for more than seven decades). The lobby’s own website even states as much:

“J Street believes that this issue may be resolved by giving all Palestinian refugees the right to live in the State of Palestine [i.e. not in “the homes from which they were displaced”], providing monetary compensation for those who choose not to do so, launching an international effort to resettle all Palestinians still living in refugee camps into permanent homes, allowing those in other countries to resettle permanently in the countries in which they reside and allowing a very limited, primarily symbolic number of refugees to return to Israel for the purpose of family reunification.”

In conclusion, Mousa represents not only the US position towards the conflict and its solution; he gets it wrong talking about the Israeli (and Jewish-American) political spectrum as well.

As for the main problem in Mousa’s September 17th article, it lies in its headline and subheading:

“Palestinians angered by statements of the American ambassador in Israel”

“Friedman said that the Trump administration is thinking about replacing president Abbas with Muhammad Dahlan”.

However, as the body of the article correctly pointed out, the newspaper which printed this statement (“Israel HaYom”) later retracted it, stating that Friedman was misquoted and actually said the administration is not thinking about the subject; unfortunately, this cannot be deduced from the headline.

These are not the first instances where Khalil Mousa’s articles take an economical approach towards truth, accuracy and impartiality. Several times before, he volunteered to serve as the uncritical mouthpiece of Fatah and Palestinian Authority figures, for example when Palestinian PM Muhammad Shtayyeh baselessly blamed Palestinians’ high cancer rates on Israel’s nuclear waste.

In another article, he conflated a West Jerusalem cemetery with an East Jerusalem one, thus fabricating an entire story about yet another Israeli attempt to “Judaize” Jerusalem that never existed.

But perhaps the most telling specimen of this correspondent’s work, especially in view of his apparent commitment to “the Palestinian Cause”, is found elsewhere, in a prior article concerning Trump’s plan which was published in February 2020. As subtle and understated as they may appear in first reading, we believe that the quotation marks in the following paragraph testify against him more than any problematic phrasing:

“The [Trump] plan cites the importance of Jerusalem to the followers of the three heavenly [i.e. Abrahamic] religions, as [are] Al-Aqsa Mosque to the Muslims, ‘The Wailing Wall’ to the Jews and the Church of Holy Sepulcher to the Christians.”

Admittedly, the use of quotation marks in Modern Standard Arabic is by no means uncommon or even well defined; they are often spotted in a variety of contexts, including in places where speakers of other languages could find their presence redundant, their meaning ambiguous or both. However, the fact that only the site associated with Jews received this “punctuational honor”, while the ones that are considered Muslim and Christian did not, shows us that the case here is rather unequivocal.

The marks on both sides of Mousa’s Wailing Wall are unquestionably “air marks” – they are meant to distinguish it from its Muslim and Christian parallels, and thus cast an ironic, dubious light on the site’s name and relation to Judaism (all while the Church and Mosque’s respective connection to Christianity and Islam is presumed serious and concrete). Indeed, championing a noble cause like the Palestinian nationalist one can sometimes be done through the smallest of details.

The only remaining question, as always: is this level of journalism would be considered acceptable, had the Independent publish it in English?