Previously we discussed two items concerning the US Secretary of State’s visit to Israel last week which were aired on BBC Radio 4 on November 19th.

The afternoon edition of ‘Newshour’ aired on BBC World Service radio on the same day devoted a quarter of its airtime to that same story as its lead item (from 00:12 here). 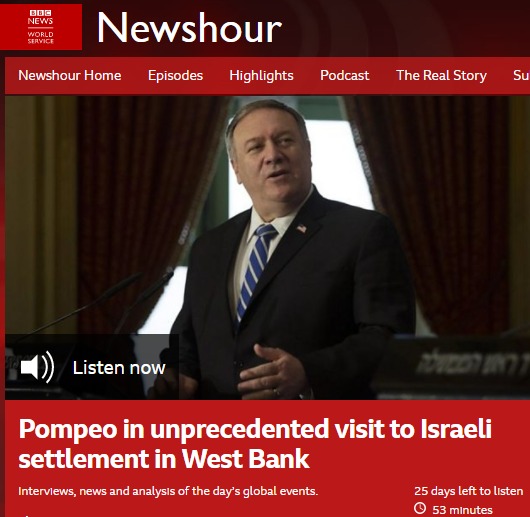 “Mike Pompeo has become the first US Secretary of State to visit a Jewish settlement in the occupied West Bank. We hear from a Palestinian whose family owns land in the settlement Mr Pompeo is visiting.”

Presenter Razia Iqbal opened that lead item with some obviously partial signposting and ‘reminders’ to listeners.

Iqbal: “We begin today with the Middle East and an unprecedented visit by a senior US official. Today the US Secretary of State Mike Pompeo became the highest ranking official to visit an Israeli settlement in the West Bank in what is the latest breach with decades of US policy in the Middle East. From Jerusalem – which you’ll remember the Trump administration in December 2017 recognised as the capital of Israel: a decision rejected by the majority of world leaders – Mr Pompeo drove to an Israeli-controlled baptism site on the banks of the Jordan River and from there in a helicopter to the visitor centre of the Psagot Winery in a Jewish settlement near the West Bank city of Ramallah. A reminder that under international law the settlements are illegal because the territory is occupied.”

As usual BBC audiences heard nothing of legal opinions which differ from that presented in the corporation’s standard mantra on ‘international law’.

Iqbal: “In a moment we’ll hear from a young Palestinian woman who grew up near the settlement Mr Pompeo has visited and we will also speak to Ambassador Dennis Ross, a veteran US diplomat. Speaking at a joint news conference with Mr Pompeo the Israeli prime minister Benjamin Netanyahu said relations between the two countries had become better than even before under the Trump administration.” [recording Netanyahu]

Iqbal: “For his part Mr Pompeo said his controversial visits were – as he put it – recognising the reality of history.” [recording Pompeo]

Iqbal: “A reminder also that the Golan Heights – an area of 690 square miles – is internationally recognised as Syrian territory occupied by Israel since 1967. Let’s hear first from a young Palestinian woman.”

BBC audiences heard nothing of why that particular contributor was chosen or where she lives. They did however hear her contradict the claim that her “family owns land in the settlement Mr Pompeo is visiting” promoted in the programme’s synopsis.

Quran: “My name’s Tamam Quran, I’m 25 years old, I’m Palestinian. He’s visiting a vineyard that’s on land known as Jabal al Tawil which is now a settlement. The actual land of the vineyard does not belong to my family but it does belong to people from my community.”

Iqbal: “This is a vineyard that your grandmother used to go to with her father.”

Quran: “It wasn’t a vineyard then, right. At that time people owned different plots of land and grew different things. So grapes – since it’s obviously naturally grows here – is one of the things that they had but it’s not that…the vineyard itself did not exist before the settlement. But the land and the nurturing of the land was there. Olive trees, pears, apples, fig trees it was a staple in the community.”

Iqbal: “You are both Palestinian and American, right?”

Iqbal: “And so in some respects one could argue that you are in dispute with the Secretary of State on both counts.”

Quran: “Yeah, I don’t think it’s so east to dichotomise a person, right. My experience, I guess, is my Palestinian side influences my American and vice versa. So it’s more an understanding of really what’s happening. So rather than just say, you know, my Palestinian or my American side, it’s my human side. I’m seeing something wrong happening.”

Iqbal: “What in your view are the consequences then of a Secretary of State legitimising visiting occupied territory?”

Quran: “If we were just to speak on the economical, mathematical perspective, what you’re doing is that you are telling American citizens who support you that it is OK to support an occupation by buying the wine being made in an illegal settlement and the labelling on the wine bottles do not say and clarify that it is from an illegal settlement. There are so many lines being crossed here, whether it is like misinformation or not sharing the proper information to, you know, maybe encouraging a settlement that illegally exists on stolen land. Not to mention all the violence that we get living next to a settlement.”

The topic of terrorism perpetrated by residents of Al Bireh was of course not brought up by Razia Iqbal.

Iqbal: “Give me some insight into what it was like growing up in occupied territory.”

Listeners were not informed that Iqbal’s 25 year-old interviewee – who is from Al Bireh – was born around the time that town came under complete Palestinian Authority control in 1995 and hence grew up in Area A rather that in “occupied territory”.

Quran: “Ahm…there is nothing I’m more proud of than being Palestinian and I thankfully see the blessings in my life. My neighbourhood are all my relatives. We all live next to each other. So my childhood was great. Always a lot of fun; I just stepped out of the front door and get to have all of my cousins around me and have a great time. But during the Second Intifada we were in complete siege lockdown. We were not allowed to exit, leave our homes, not even for the supermarket except for like maybe an hour or two a day. One day I was five years old at the time and I was playing in my bedroom and I felt the house shaking. I peer out of the window and I see a tank right in front of my house and since I guess the soldiers in the tank saw a movement, pointed the missile of that tank towards me. Then a soldier exited the tank from on top and he pointed his gun as well. He noticed I was a child and then just went back in the tank and left. That is just one example of a Palestinian who thankfully had parents who had steady jobs. I live in the town that my parents and my ancestors are from. I haven’t been, you know, forced to emigrate or to move or to be a refugee. That is the story of a Palestinian with privilege. Imagine other Palestinians; the duality of joy and grief that we live with.”

Listeners were given no context to that story whatsoever such as the fact that the Fatah leader Marwan Barghouti (who was later convicted of the premeditated murder of five people in three shooting attacks carried out in 2001-2002) had an office in Al Bireh at the time that the Palestinian Authority chose to launch the terror war known as the Second Intifada.

Iqbal: “I’m just wondering whether you…if you ever did encounter the Secretary of State for example, just hypothetically, were you to encounter him what would you say to him?”

Quran: “I don’t think I would want to speak to him. I think someone in such a position is smart enough to know what they’re doing and I think he is aware of what he’s doing.”

Iqbal: “And when you think about the possibility of change inside the White House? President-elect Biden will be occupying the White House come January. Do you expect there to be a shift of policy? Are you hopeful?”

Quran: “I think the relations between the USA and Israel are too strong to be eradicated or understood. I don’t want to take it to an extreme but I just think there are very close ties there.”

Iqbal: “That was Tamam Quran, a 25-year-old Palestinian living in the West Bank.”

That four and a half-minute long interview clearly contributed little to audience understanding of the ostensible subject matter but certainly did promote Palestinian messaging concerning Pompeo’s visit to Psagot Winery.

In the days prior to that visit Tamam Quran and additional residents of Al Bireh appeared in various media outlets to promote claims concerning land ownership.

“Kainat and Karema Quraan, two sisters from Al-Bireh, say they have documents showing they own a plot of land on which some of the vineyards and a winery building were established.

“Imagine that your own land, your property, that you lived off of and your ancestors lived off of, is taken like this by strangers, by force, and you can’t touch it,” Kainat said.”

The New York Daily Post ran an article (which had to be amended due to false claims about supposed Israeli actions) by a lawyer with offices in the US and Ramallah with family roots in Al Bireh which included claims of ownership of the land on which Psagot is located while concurrently stating that the same land had been sold.

“The land was purchased in 1964 by the Jerusalem municipality with plans to develop it into a tourist attraction, but they were thwarted when the Israeli army occupied the West Bank in the 1967 war.”

As for Tamam Quran herself, she gave an interview to the Radio France Internationale correspondent in Al Bireh and was the featured face in a video made by an organisation called ‘The Palestine Institute for Public Diplomacy’ (which is reportedly “affiliated with the PLO”) promoting a petition “to ban Psagot wine and all settlement products from the U.S.”

Clearly ‘Newshour’ producers did not randomly stumble across the “young Palestinian woman” who was given a four-and-a-half-minute platform from which to promote political messaging that supports the BBC’s chosen narrative on this story and which was recycled in part in the evening edition of the same programme (from 00:10 here).

The lack of transparency and failure to adhere to editorial guidelines concerning “contributors’ affiliations” however means that BBC audiences around the world remain unaware that what they heard was not in fact a news item but part of an organised political campaign with which the BBC chose to cooperate.