Since news of the assassination of Mohsen Fakhrizadeh near Tehran broke on the afternoon of November 27th the BBC News website has produced no small amount of coverage of that story. 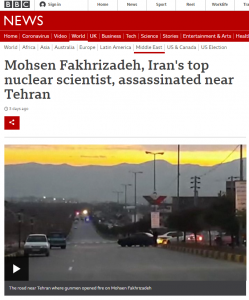 Given the BBC’s record on the use of the word terror when reporting attacks against Israelis, readers may have been interested to note the use of the terms ‘terror’ and ‘terrorists’ no fewer than six times throughout the report.

Readers also find three written references to a sentence spoken by the Israeli prime minister in 2018 along with an embedded video.

“As head of the ministry of defence’s research and innovation organisation, Fakhrizadeh was clearly still a key player. Hence Benjamin Netanyahu’s warning, two years ago, to “remember his name”.”

“At the time, Israeli Prime Minister Benjamin Netanyahu said he identified Fakhrizedeh as the head scientist in the programme, and urged people to “remember that name”.”

They are not however informed that the UN Security Council imposed sanctions upon him in 2007 in the category of ‘Persons involved in nuclear or ballistic missile activities’ and that the following year he was designated by the United States.

Only in paragraph 26 (excluding Adams’ analysis) are BBC audiences informed that:

“Fakhrizadeh was the most renowned Iranian nuclear scientist and a senior officer of the elite Islamic Revolutionary Guard Corps.” [emphasis added]

“A professor of physics, Fakhrizadeh is said to have led Project Amad, the alleged covert programme that was established in 1989 to research the potential for building a nuclear bomb. It was shut down in 2003, according to the IAEA, though Mr Netanyahu said the documents retrieved in 2018 showed Fakhrizadeh led a programme which secretly continued Project Amad’s work.”

A photo caption reads: “Mohsen Fakhrizadeh, pictured in an undated photo, was head of the ministry of defence’s research and innovation organisation” and the same description is included in Adams’ analysis.

Readers are not however informed that:

“At the time of his killing, Fakhrizadeh was head of the Organization of Defensive Innovation and Research (SPND). The SPND, based in Tehran, is supervised by the MDAFL [ Ministry of Defense and Armed Forces Logistics] and is focused on nuclear weapons research.”

As is usually the case in BBC reporting on Iran’s nuclear programme, readers find uncritical amplification of a regime talking point:

“Iran insists its nuclear programme is exclusively for peaceful purposes.”

The BBC’s report gives amplification to unevidenced Iranian claims of Israeli responsibility for both this latest assassination and previous ones.

The second of the BBC News website’s reports – also tagged ‘Israel’ – was published early on the morning of November 28th and is now titled ‘Mohsen Fakhrizadeh: Iran blames Israel for killing top scientist’. 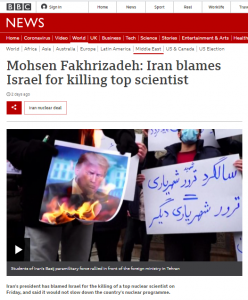 The article includes analysis by Lyse Doucet as well two written references to the sentence spoken by the Israeli prime minister in 2018 and the same embedded video.

It promotes the same descriptions of Fakhrizadeh’s position as seen in the earlier report – with the same omissions and without any reference to his position as an IRGC officer.

In addition to amplifying unsubstantiated claims of Israeli involvement in the assassination from the Iranian regime it also promotes a paywalled New York Times report.

“The New York Times quotes three US officials, including two intelligence officials, as saying Israel was behind the attack. But Israeli cabinet minister Tzachi Hanegbi said on Saturday that he had “no clue” who was behind the killing.”

Once again readers find amplification of the Iranian regime’s talking points but receive no explanation as to why a ‘peaceful’ nuclear programme would be headed by a senior military officer:

“However, it [Iran] insists its nuclear programme is exclusively for peaceful purposes.”

Later on November 28th the BBC News website published an article now headlined ‘Iran’s Mohsen Fakhrizadeh: Why was he assassinated?’ written by Massoumeh Torfeh. The bio at the foot of the article fails to mention that Torfeh previously worked for the BBC. 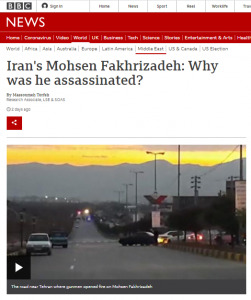 “So, the motive for the assassination – for which no one has claimed responsibility – would appear to have been political, rather than relating to Iran’s nuclear activities.

Two possible motives stand out: firstly, to jeopardise potential improvements in relations between Iran and the new Biden administration in the United States. And, secondly, to encourage Iran to engage in a retaliatory act.”

Mr Netanyahu was reportedly also not successful in persuading the prince to normalise diplomatic relations between their two countries. […]

The reported Neom meeting was said to have been arranged by US Secretary of State Mike Pompeo, who had just been to Qatar and the United Arab Emirates (UAE), where Iran was the main topic of conversation.”

Citing “many reports” but failing to identify them, Torfeh also uses the 2018 Netanyahu remarks:

“And, indeed, many reports note that Prime Minister Netanyahu was one of the few world leaders to have spoken directly about the scientist.

In a televised presentation in 2018, he talked about Fakhrizadeh’s leading role in Iran’s nuclear programme and urged people to “remember that name”.”

Once again readers of this article are told nothing about Fakhrizadeh’s position as an IRGC officer who apparently held the rank of Brigadier General.

Embedded into the BBC’s reports is a commentary-free video titled ‘Scene of assassination of Iran’s top nuclear scientist’ which also appeared separately on the BBC News website with its synopsis promoting a so far unevidenced claim from an Iranian official:

“Iran’s Foreign Minister Mohammad Javad Zarif, has condemned the killing “as an act of state terror”.” 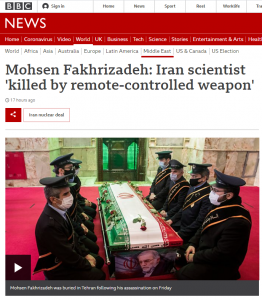 “In the early 2000s, Fakhrizadeh played a crucial role in Iran’s nuclear programme but the government insists its nuclear activities are entirely peaceful.”

Speculations concerning the responsibility for the attack – including from the paywalled New York Times – are once again promoted. Readers are told that:

“As head of Iran’s Organization of Defensive Innovation and Research, known by its Persian acronym SPND, Fakhrizadeh had carried out “considerable work” in the area of “nuclear defence”, the general [Iran’s defence minister] said.”

No details are provided as to what “nuclear defence” entails and no mention is made of Fakhrizadeh’s IRGC connection but the report once again includes the video of and a reference to Netanyahu’s two-year-old remarks.

“The physics professor is said to have led “Project Amad”, a covert programme that Iran allegedly established in 1989 to carry out research on a potential nuclear bomb.

The project was shut down in 2003, according to the International Atomic Energy Agency, though Israeli Prime Minister Netanyahu said in 2018 that documents obtained by his country showed Fakhrizadeh led a programme that was secretly continuing Project Amad’s work.

In a presentation, Mr Netanyahu urged people to “remember that name”.”

Iranian talking points are again uncritically promoted, along with what the BBC admits is speculation:

“Iran has previously accused Israel of assassinating four other Iranian nuclear scientists between 2010 and 2012.

Analysts have speculated that the latest assassination was not meant to cripple the Iranian nuclear programme but rather to put an end to the prospect of the US rejoining the 2015 Iran nuclear deal when President-elect Joe Biden takes office next year.” 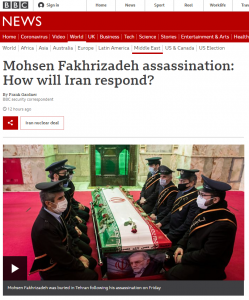 Also tagged ‘Israel’, it too primarily promotes speculation concerning possible reactions to what is described as a “controversial killing” in a “mysterious attack”.

The article promotes the same video of the Israeli prime minister speaking in 2018 just after stating that:

“…Iran’s ally Hezbollah was blamed for a suicide bomb attack on a bus full of Israeli tourists in Bulgaria in 2012.” [emphasis added]

In fact a Bulgarian court convicted two people of that attack, with the Chief Prosecutor noting that evidence “showed Hezbollah provided financial and logistical backing for the attack”.

“Mr Fakhrizadeh was not only a leading nuclear scientist, he had a senior role within the defence establishment, as evidenced by the number of military figures at his funeral.”

Once again BBC audiences were not informed of Fakhrizadeh’s position as a senior officer in the IRGC in this article.

As we see only one of the BBC’s five reports on the topic bothered to mention that Fakhrizadeh was a senior officer in the Iranian Revolutionary Guards Corps which is designated as a terrorist organisation by the US, Saudi Arabia and Bahrain and sanctioned by the EU. While BBC audiences were not provided with the full picture concerning Fakhrizadeh’s more recent activities, Iranian talking points concerning its supposedly ‘peaceful’ nuclear programme were uncritically repeated, along with the regime’s claims concerning as yet completely unevidenced Israeli responsibility for the assassination and assorted unsupported speculations concerning motive.