On December 8th the BBC Jerusalem bureau’s Tom Bateman produced a filmed report on a topic which has been widely covered by the corporation in the past – the Beitar Jerusalem football club.

Titled “How UAE sheikh came to buy infamous Israeli football club”, Bateman’s report begins by once again focusing on the exception to the rule in Israeli football, where most teams – including the national squads – have players from many different ethnic and religious backgrounds. 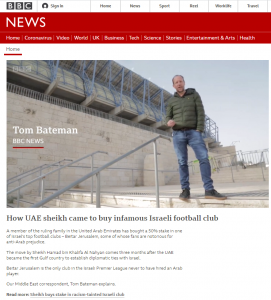 Bateman: “And what makes this such a story is that Beitar is known for a notoriously racist far-right element of its fan base. They’re called La Familia. They’ve been known in the past for racist chants in the terraces, for aggressive behaviour and they take pride in the fact that Beitar never signed an Arab player.”

Later on in the film Bateman acknowledges that his opening portrayal is currently less relevant.

Bateman: “There’s been a change here though because the club says that in the last couple of years it’s seriously cracked down on racism. Its owner threatened to sue fans for hate speech in the terraces, says he will not tolerate racism. And one of the groups that calls for an end to all of it says there has been a significant change. They say that they’ve all but wiped out racist chants in the terraces here.”

Listeners to BBC Radio 4’s ‘Six O’Clock News’ on the same day heard a report from Bateman (from 25:42 here) in which he similarly first told audiences of “far-right, ultra-nationalist” fans “notorious too for racism” and only later on acknowledged that the club’s current owner “has done much to stamp out racism”.

Interestingly, Bateman also chose to bring in some Palestinian Authority talking points unrelated to the story itself: [emphasis in italics in the original]

Bateman: “The £70 million deal is one of the fruits of normalisation. Israel and the UAE established diplomatic ties as part of a historic shift in Middle East relations. But all of this infuriates the Palestinians. As business warms between Israel and the Gulf, they see a betrayal of Arab solidarity over their hopes for statehood.”

Also on December 8th the same story was covered in a BBC News website report titled “Beitar Jerusalem: UAE sheikh buys stake in racism-tainted Israeli club” in which readers find a quote from the new part-owner of Beitar Jerusalem: 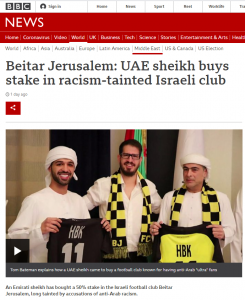 “Sheikh Hamad said: “I am thrilled to be a partner in such a glorious club that I have heard so much of and in such a great city, the capital of Israel and one of the holiest cities in the world.”

He added: “I have heard a lot about the change taking place in the club and the way things are going, and I am happy to take part in that.””

The report could have explored the topic to which Sheikh Hamad referred in that second quoted sentence: how the efforts (which were widely covered by the BBC just a year ago) made by owner Moshe Hogeg to tackle the issue of racism among some of the club’s fans laid the foundations for significant investment from an Arab country.

Instead, the BBC chose to editorialise:

“Sheikh Hamad’s reference to Jerusalem is potentially controversial, given the city’s status is at the heart of Israel’s conflict with the Palestinians.

Israel has occupied East Jerusalem since the 1967 Middle East war and regards the entire city as its capital – a position supported only by the Trump administration, Guatemala and Honduras.

The Palestinians claim East Jerusalem as the capital of a future state of their own.”

Similar editorialising also appears in a report published on the BBC Sport website on December 8th under the headline “Beitar Jerusalem: Why is an Arab investor pouring money into Israel’s ‘most racist football club?‘”. 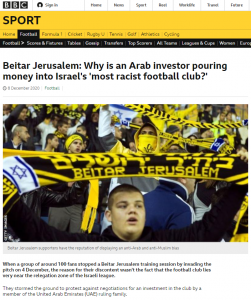 “…Al Nahyan’s carefully worded statement on 7 December included an allusion to Jerusalem as the capital of Israel.

The city’s status is one of the core issues in the Israeli-Palestinian conflict.

Israel considers all of Jerusalem its capital, a position that the United States supports but that is not recognised by most countries.

Palestinians seek to make East Jerusalem, which Israel captured in the 1967 Middle East war, the capital of their future state.”

In December 2019 the BBC told its audiences “How Beitar Jerusalem’s football club owner took on racism and won”. One year on, it has side-lined that effort in order to promote some of its own long-standing narratives.

The BBC returns to an old obsession