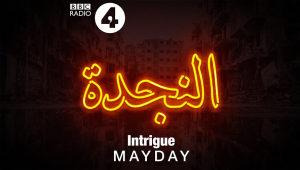 “Mayday tells the extraordinary real story of the man who organised the White Helmets – rescuers who film themselves pulling survivors from bombed out buildings in rebel-held areas of Syria – and investigates claims that, far from being heroes, they are part of a very elaborate hoax.”

“The Russian and Syrian governments fuelled the idea of a conspiracy. Using the United Nations as a platform, they promoted the idea that James Le Mesurier and the White Helmets were guilty of an increasingly wild and gruesome list of crimes. Kidnap, torture and organ harvesting were just some of the claims on the charge sheet. An online network of bloggers, activists and bots were publishing similar allegations.

The Syrian and Russian government’s [sic] had good reason to want to damage the credibility of James Le Mesurier and the White Helmets. Footage from the GoPro cameras they use to document their rescues have attracted the worlds’ attention to the Russian and Syrian bombardment of civilians in Syria. Evidence collected by the White Helmets was used to help prove President Assad’s responsibility for chemical weapons attacks against civilians, including children. Were those crimes ever to be prosecuted, the White Helmets’ evidence could be crucial.”

The topic of the conspiracy theories surrounding the ‘White Helmets’ is addressed inter alia in episode 4 of the series with particular focus on Vanessa Beeley and Eva Bartlett, including references (lacking context in places) to their earlier anti-Israel activism. 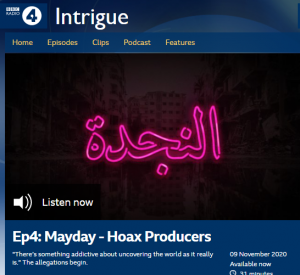 Over two and a half years before this Radio 4 series was aired (in April 2018) BBC Trending had published an article about Beeley and others titled “Syria war: The online activists pushing conspiracy theories”.

“The activists call themselves “anti-war”, but as they generally back the Syrian government’s military operations against rebel forces seeking to overthrow Mr Assad and Russian air strikes carried out in support, it might be more accurate to describe them as “anti-Western intervention” or “pro-Syrian government”.

According to their narrative, international media organisations across the political spectrum, along with human rights organisations, are somehow covertly aligned with Western governments, Saudi Arabia, the Islamic State group and al-Qaeda and taking part in a secretive plot to take over Syria.”

The BBC’s understanding of the fact that the propaganda war run by Russia and the Syrian regime and supported by Western conspiracy theorists included disinformation concerning the ‘White Helmets’ did not however prevent it from continuing to repeatedly amplify those claims.

BBC PROMOTES WHAT IT DESCRIBED IN APRIL AS ‘CONSPIRACY THEORIES’

Chloe Hadjimatheou’s series is not without issues. For example in episode 8, which tells of the evacuation of some of the ‘White Helmets’ workers and their families from southern Syria via Israel in July 2018, listeners are told (from 14:48) that: 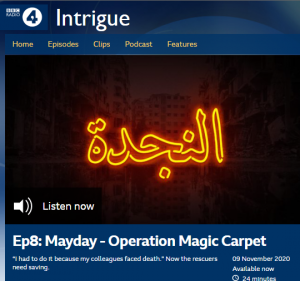 “Around 9:30 p.m. Farouk arrived at the Israeli side of the border crossing on the Golan Heights. […] There’s a tall razor wire fence with concrete watch towers every few meters and there’s a huge metal gate.”

The site of the entry of the ‘White Helmets’ into Israel was not at a “border crossing” (the only border crossing on the Golan Heights is further north at Quneitra), the fence is not made of “razor wire” and there are no “concrete watch towers” at all in that location.

Nevertheless, this series does provide an opportunity for the BBC to explain to its audiences why it adopted an editorial policy (which continues to this day) of promoting false balance – apparently in the name of ‘impartiality’ – by repeatedly amplifying and mainstreaming what it knows to be propaganda put out by the Assad regime and its Russian ally and further spread by assorted conspiracy theorists.