Nearly four years ago the Guardian reported that:

“The BBC is to assemble a team to fact check and debunk deliberately misleading and false stories masquerading as real news.

Amid growing concern among politicians and news organisations about the impact of false information online, news chief James Harding told staff on Thursday that the BBC would be “weighing in on the battle over lies, distortions and exaggerations”.

In September 2019 it was reported that:

“A group of major news publishers and tech giants has revealed plans to collaborate in the fight against fake news.

Those taking part have pledged to work together to counter disinformation that “threatens human life” or has the potential to disrupt elections.

Publishers and tech giants involved in the BBC’s anti-fake news squad include the Financial Times, Reuters, Facebook and Google.”

Since the emergence of the Coronavirus pandemic, those initiatives have included pushing back against disinformation concerning the disease itself and the vaccine.

“BBC director-general Tim Davie has warned of the “human cost” of disinformation amid conspiracy theories about coronavirus vaccines.

His comments follow a rise in false claims about the vaccines posted on social media platforms.

Davie said: “2020 has been a year like no other. We have seen the rapid spread of harmful disinformation and a growing number of conspiracy theories online.

Earlier in the year the BBC appointed a ‘specialist disinformation reporter‘ and the BBC’s ‘Reality Check’ produced a series of videos concerning “Coronavirus: Health myths you should ignore”.

“…there’ve also been a variety of myths circulating on social media and elsewhere which amount to fake health advice. So here are a few things to ignore.”

All well and good: one would indeed expect Britain’s national broadcaster to help the general public it serves to distinguish scientific fact from “fake health advice”, misinformation, disinformation and superstition.

Nevertheless, the BBC News website appeared to be rather less concerned about “separating facts from fiction” when it published a report on its ‘Middle East’ page by the BBC Jerusalem bureau’s Yolande Knell on December 19th titled ‘Faith and fertility at Bethlehem’s Milk Grotto’.

Over 35% of that article’s word-count is devoted to promotion of the notion of health-related ‘miracles’ following the consumption of limestone powder sourced from a religious site in Bethlehem. 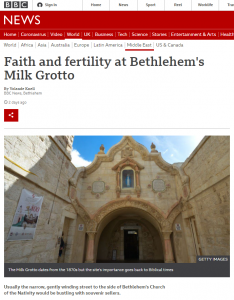 “It has long been believed that having a drink containing what they call “milk powder” – which is ground from the limestone – and saying a special devotion to Mary can heal health problems – especially those related to infertility.

Many Christians from Bethlehem have a story about the powers of the Milk Grotto.

After years of trying for a child, one woman finally gave birth at Christmastime after praying here with her husband. It was “the greatest gift”, she tells me.

“It happened twice with people I know well,” says tour guide Suad Sfeir. “My friend from the USA took some powder for her cousin who’d been married for 25 years and hadn’t been able to have children.

“When she came back a year later, she brought me a picture of their little baby.”

“It’s easy to dismiss the milk powder as hocus pocus,” cautions Sister Naomi as she holds up a sachet, “but it’s about faith and belief.”

And there’s plenty of that on display in a small office outside the church. Over the years, hundreds of touching letters have been sent from around the world testifying to apparent miracles.

A couple in India attach a photo of a chubby, smiling little girl. They took the milk powder after suffering two miscarriages. “Now we’re happy,” they write, simply.

“I cried a lot and my tears were my prayers,” says a French woman recounting her visit to the grotto to pray for a child. She says she became pregnant two months afterwards.

A woman in Brazil, who’d been told she was infertile, describes “a miracle called Gabriela” born after she heard about the church on a TV show and requested the powder.”

Clearly in this case the BBC was not of the opinion that “separating facts from fiction is really important” and was quite content to publish Yolande Knell’s promotion of “false health advice” relating to the consumption of limestone powder as a ‘cure’ for infertility.

At least we now know where the BBC draws the line at “fighting fake news” and “harmful disinformation”.