As we have previously documented (see ‘related articles’ below), in the past couple of weeks the BBC provided its audiences with preemptive reporting on the topic of Coronavirus in the Gaza Strip and reports on the first two cases diagnosed there. 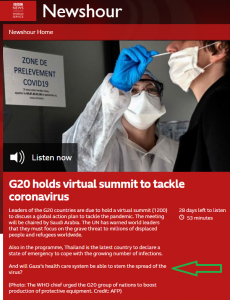 On March 26th seven additional cases were confirmed and the final item in that day’s afternoon edition of the BBC World Service radio programme ‘Newshour’ was billed as follows in the synopsis:

“And will Gaza’s health care system be able to stem the spread of the virus?”

Menendez: “Covid 19’s shown its power to overwhelm well-funded health systems in the richest countries. How much greater the risk then when those medical services are weak to begin with and when people are packed into spaces in which calls for social distancing or self-isolation are all but futile. Gaza is the tiny strip of land between Israel and Egypt into which 2 million Palestinians are crammed under the governance of the internationally shunned Hamas movement. Matthias Schmale is the Gaza operations director of UNRWA – the UN agency for Palestinian refugees – and he’s been talking to my colleague Tim Franks.”

Schmale: “Overnight another 7 cases were announced, bringing the total to nine.”

Franks: “Right and do you know where these infections originated from?”

Schmale: “The official line from the Ministry of Health is that the original two cases came from outside. They were two Palestinians who’d been in Pakistan and then were put into quarantine. And the latest seven announced last night are guards, security people at this quarantine. So, you know, it’s a bit a border line because they didn’t travel but they contracted it from there other two inside the quarantine area.”

Franks: “Right and I guess that’s particularly concerning is once you get into local transmission.”

Schmale: “I’ve been saying now for several days we need to treat this as if it is a full outbreak. You know, we don’t have the luxury to speculate. And so as UN we are working as if there is a full outbreak locally.”

Listeners were not told that UNRWA had suspended food distribution two days earlier.

Franks: “Well you say you need to treat it as if it’s a full outbreak; Gaza has particular challenges, to put it euphemistically. How difficult is it to try and contain this virus for you?”

Schmale: “The biggest challenge really is that it is so overcrowded and that standards of living – particularly in the refugee camps; 1.4 million people in Gaza of the 2 million living here are refugees, many of whom live in overcrowded camps, so it’s very common to have six, eight or even ten people living in a room or two. And so to do social distancing in those kinds of circumstances – or isolation when once that becomes necessary – is almost impossible to imagine. So that’s one big challenge.”

Of course Tim Franks did not ask Matthias Schmale to explain to listeners why there are still refugee camps in the Gaza Strip nearly fifteen years after Israel’s disengagement from the territory and he refrained from providing BBC audiences with the highly relevant context of UNRWA’s deliberate perpetuation of hereditary refugee status for millions of people living under Palestinian control.

Schmale: “The other big challenge is that the hospitalisation sector is completely in meltdown. Now what I’ve been told is we have at maximum 60 ICU beds. Out of every hundred people who get ill, five at least on average would need ICU so you can do the math. As soon as more than 1,500 people are ill, they won’t be able to cope. So we are really worried about that, not to mention then the many mild and medium cases that we would have that would have no place to go to.”

Franks did not ask Schmale for the source of that claim that 5% of Covid 19 patients would need ICU treatment. This model, for example, estimates that 2% of patients would need ICU treatment and 1% would require a ventilator. Neither did he bother to enquire how the fact that the Gaza Strip has a relatively young population (the median age is around 18 years) in comparison with many countries would affect the demands placed on the healthcare system.

Franks: “The next question inevitably is what can be done about it?”

Schmale: “We’ve been working for days now as UN including UNRWA – the organization I work for looking after Palestine refugees – at high speed and try and contain it, you know, and that’s about public health messaging, as difficult as it is to try and respect the guidance from the World Health Organisation about personal hygiene, about social distance at least one or two meters apart. That needs to hold and we’re trying to do that. We are trying to work with the authorities to actually impose a curfew. We think that’s now essential, you know. We don’t – as some colleagues have expressed – want to end up like places like Italy where maybe some those decision were taken too late. And so what we’re trying to do is hope for the best that there won’t be lots of people getting ill but preparing for the worst. And there will be clear limitations as to what we can do if there indeed is a full-scale outbreak in terms of many people getting sick.”

Menendez: “Matthias Schmale, the Gaza operations director of UNRWA – that’s the UN agency for Palestinian refugees – talking about the situation there.”

As we see the BBC continues to promote long-standing talking points concerning the Gaza Strip in its coverage of the Coronavirus pandemic. Notably though, audiences have yet to hear about Hamas’ prioritisation of terror over public services for more than a decade, the Palestinian Authority’s responsibility for the shortage of medicines and equipment in hospitals in the Gaza Strip or the part played by Israel in delivering testing kits and medical supplies to the territory.

Those omissions suggest that BBC journalists are less interested in informing audiences of the realities of the situation than they are in promoting a long since adopted narrative.