The February 8th afternoon edition of the BBC World Service radio programme ‘Newshour’ included an item (from 14:06 here) about the latest court session in the Israeli prime minister’s trial.

Coomarasamy: “The Israeli prime minister Benjamin Netanyahu has made his second court appearance on charges of bribery, fraud and breach of trust. It came just a month and a half before another general election in a country that’s growing wearily used to them. And this one, triggered when Mr Netanyahu’s latest coalition partner Benny Gantz pulled out of the arrangement, accusing the prime minister of being serially dishonest.”

The phrase used by Gantz in that speech last December announcing his party’s support for the preliminary reading of a bill to dissolve the Knesset was actually “a serial breaker of promises”. Coomarasamy continued:

Coomarasamy: “Some of the protesters outside the court building in Jerusalem today voiced a similar opinion.”

Listeners heard from two unidentified women with the first one saying:

Woman: “We are actually advocating the rule of law. We think that Benjamin Netanyahu should stand trial like any other citizen in the State of Israel.”

Seeing as that is literally what was happening as that recording was made, the BBC’s decision to feature those words in its report is strange to say the least.

Coomarasamy then brought in the BBC Jerusalem correspondent Yolande Knell who, at 16:18, told listeners that:

Knell: “Around the corner there were probably a few hundred very noisy opponents calling for him to resign, saying that Israel’s prime minister should not remain in office while he is facing criminal charges.”

Knell did not bother to inform audiences that while that may well be the opinion of those protesters, Israeli law (like that in some other countries) does not require a sitting prime minister facing criminal charges to stand down until the entire legal process has been exhausted.

From 17:32 Knell had another opportunity to explain that point to listeners around the world but she made do with one confused last sentence:

Coomarasamy: “If he is convicted and wins the election or remains in power, what is the consequence?”

Knell: “Well as far as the court hearing goes, previous trials of this kind have extended into years. This is only the Jerusalem District Court so appeals can still be made to the Supreme Court if there are prosecutions. There are three cases here that are going on all at the same time. No timetable has yet been set for calling the witnesses. So this will really have a big bearing for probably years to come. He could have to appear, Mr Netanyahu, in court multiple times a week in the future. He would be forced to resign if he was convicted but that would mean that all appeals had to be exhausted.” 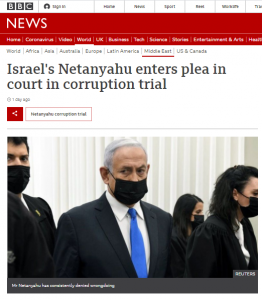 Interestingly, a report on the same topic which appeared on the BBC News website on the same day indicates that the BBC is in fact capable of explaining that point clearly when it wishes to do so. Under the sub-heading “How can the PM serve and stand trial at the same time?” readers are correctly informed that:

“According to Israeli law, a leader charged with a crime is not required to resign. But there is no precedent.”

“Even if he is convicted and is still in power, Mr Netanyahu will not be required to resign unless and until any appeals are exhausted – which could, in theory, be many months or years into the future.”