As noted here previously, on February 9th the BBC acknowledged, in response to a complaint, that the Oslo Accords “give the Palestinian Authority oversight of public health”. Nevertheless, even after the publication of that clarification the BBC Jerusalem bureau’s Tom Bateman continued to promote the simplistic and erroneous notion that it is Israel’s responsibility to vaccinate Palestinians. 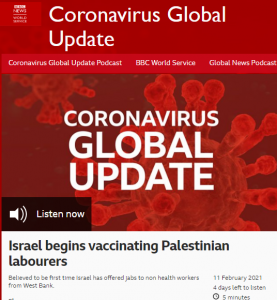 “Believed to be first time Israel has offered jabs to non health workers from West Bank.”

Presenter Jackie Leonard introduced that lead item (from 00:20 here): [emphasis in italics in the original, emphasis in bold added]

Leonard: “Israel has begun vaccinating small numbers of Palestinians who enter the country to work. It’s believed to be the first time the Israelis have offered jabs to Palestinians from the occupied West Bank other than health workers there. Israel’s impressive Coronavirus vaccine drive has been the fastest in the world but its reluctance to include Palestinians living under occupation has attracted international criticism. Tom Bateman reports from Jerusalem.”

Bateman: “Tens of thousands of West Bank Palestinians work inside Israel, many on farms or building sites. There’s been growing pressure on Israel’s government to immunise them. Health officials said around 700 people were vaccinated, although the figure also included Palestinians from East Jerusalem who already come under Israel’s vaccine programme. Israel has immunised Palestinian staff in its hospitals, some prisoners and has delivered two thousand doses to Palestinian officials for West bank health workers. But this latest move amounts to a first, extending Israeli vaccines to some Palestinian labourers.”

As we see, while providing yet more amplification to the opportunistic political campaign concerning Corona vaccinations that the BBC has been promoting since early January, no effort was made to inform listeners that under the 1995 Oslo Accords “[p]owers and responsibilities in the sphere of Health in the West Bank and the Gaza Strip” were transferred to the Palestinian Authority. 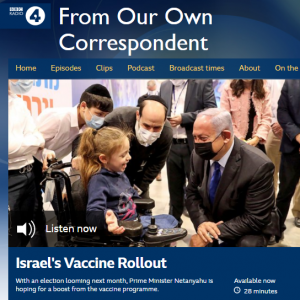 Two days later, on February 13th, BBC Radio 4 aired an edition of ‘From Our Own Correspondent’ titled ‘Israel’s Vaccine Rollout’.

“Israel’s health system has been in the spotlight as it races ahead with its coronavirus vaccination programme. More than half of eligible Israelis – about 3.5 million people – have now been fully or partially vaccinated. For our Middle East correspondent Tom Bateman, covering the pandemic meant a return to his beat after a mishap on the streets of Jerusalem, and a vivid episode of his own in hospital.”

Adie: “First, to Israel where the country’s health system has been in the spotlight for its rapid vaccination programme. More than half of eligible Israelis – around three and a half million people – have now been fully or partially vaccinated. But even so, most Palestinians have yet to receive vaccines. […]”

Listeners were in fact told very little about the logistics of Israel’s vaccination programme. Much of the item related to Tom Bateman’s bicycle accident last year, with comment and speculation concerning Israeli politics thrown in. Audiences did however hear the following:

Bateman: “Israel’s story has gone from then [March 2020] losing control of the virus to a world-leading immunisation rate and much politics surrounding it. Most Palestinians still wait for their vaccines with hopes only in an ill-equipped Palestinian Authority and a programme by the World Health Organisation that will take time. Human rights groups call on Israel as the occupying power to provide their vaccines. It has delivered two thousand doses for health workers in the West Bank but it says the Oslo peace accords leave health provision to Palestinian officials. Meanwhile, more than three and a half million Israelis – around 40% of the population – have received at least one jab.”

Not for the first time, Bateman refrained from providing BBC audiences with a factual view of the organisations he described as “human rights groups”. As has been the case since early January, he avoided telling listeners that those groups include political NGOs (in some cases foreign funded) with a record of lawfare campaigns against Israel such as B’tselem, Amnesty International Israel, Gisha, Lawyers for Palestinian Human Rights, Adalah, Al Mezan and the PCHR – the latter two of which are known to have links to the PFLP terrorist organisation.

As has been the case in many of his previous reports on the topic of vaccinations, Bateman also failed to provide audiences with a fact-based view of the Oslo Accords.

Obviously the BBC needs to urgently inform its Jerusalem bureau correspondent that – as its February 9th clarification states – “the Oslo Accords give the Palestinian Authority oversight of public health” and that the relevant terms of that 1995 agreement are not merely something that ‘Israel says’ is the case.